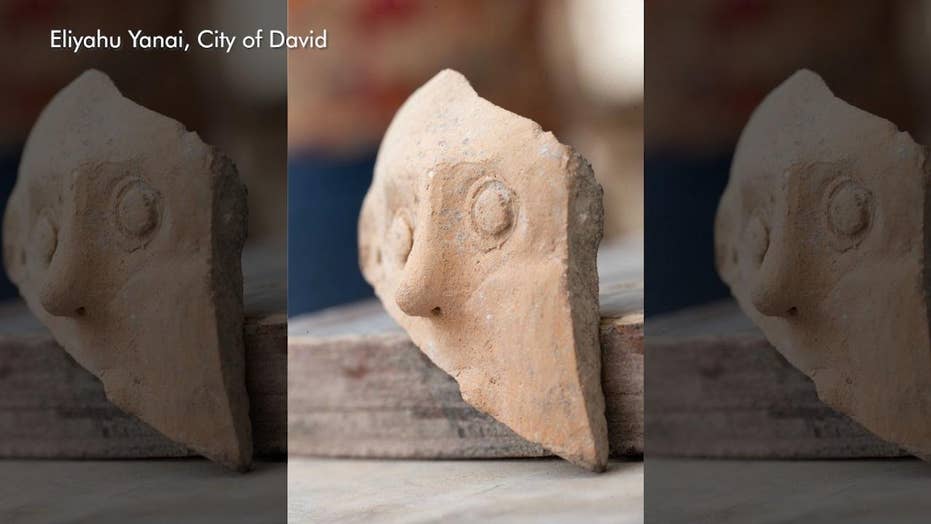 Ancient clay fragment of a ‘grotesque’ deity was found in Israel

A clay fragment depicting an ancient deity that scares away spirits was discovered in Jerusalem’s famous City of David.

An unusual clay jar fragment depicting a ‘grotesque’ ancient deity for scaring away evil spirits has been discovered in Israel.

The fragment, which dates back to the 4th or 5th century B.C., was unearthed as part of the excavation in Jerusalem’s famous City of David.

Archaeologists from the Israel Antiquities Authority and Tel Aviv University found the artifact in a large refuse pit with other fragments from the time of Persian rule over the ancient Kingdom of Judah.

1,600-YEAR-OLD ESTATE THAT BELONGED TO A WEALTHY ANCIENT SAMARITAN DISCOVERED IN ISRAEL

The jars, which were common during the Persian era, are known as “Bes-vessels.”

The fragment dates back to the 4th or 5th century B.C. (Eliyahu Yanai, City of David)

“In Egyptian mythology, Bes is the protector deity of households, especially mothers, women in childbirth, and children,” the Israel Antiquities Authority explained in a statement, noting that the deity became part of Persian culture, where he was regarded as the defender of everything good.

Synonymous with music and dancing, depictions of Bes often adorned the walls of houses, or as amulets worn around the neck. “Bes usually appears as a kind of bearded dwarf with a large face, protruding eyes and tongue sticking out when he is wearing a feather hat,” according to the Israel Antiquities Authority. “This grotesque figure is apparently intended to evoke joy and laughter and drive away the evil spirits.”

Experts say that the find is the first of its kind in Jerusalem and its surrounding area.

The fragment is from the time of Persian rule over the ancient Kingdom of Judah. (Eliyahu Yanai, City of David)

"Pottery from this period was exposed in the past in the City of David, but this is the first time that such a vessel has been found in archaeological excavations in Jerusalem or anywhere in the Judean highlands,” said Prof. Yuval Gadot of Tel Aviv University and Dr. Yiftah Shalev of the Israel Antiquities Authority, in a statement.

Depictions of Bes have also been found in ancient Persian cities such as Shushan and Persepolis. The Israel Antiquities Authority timed their announcement of the clay fragment discovery to coincide with the Jewish holiday of Purim, which begins on Wednesday night. The holiday celebrates the salvation of the Jewish people in the Persian Empire and its capital city, Shushan.

The clay jar fragment is the latest fascinating archaeological discovery in Israel. Archaeologists, for example, recently discovered the estate of a wealthy ancient Samaritan at Zur Natan in central Israel.

The fragment is part of a jar known as a “Bes-vessel.” (Eliyahu Yanai, City of David)

In another project, researchers have been shedding new light on the history of a Biblical site linked to the Ark of the Covenant.

The deity was regarded as the defender of everything good in ancient Persian culture. (Eliyahu Yanai, City of David)

Other recent finds in recent years include the skeleton of a pregnant woman, dating back 3,200 years, in Israel’s Timna Valley, at a place once called King Solomon’s Mines.

The discovery is the first of its kind in Jerusalem and its surrounding area, according to archaeologists. (Eliyahu Yanai, City of David)