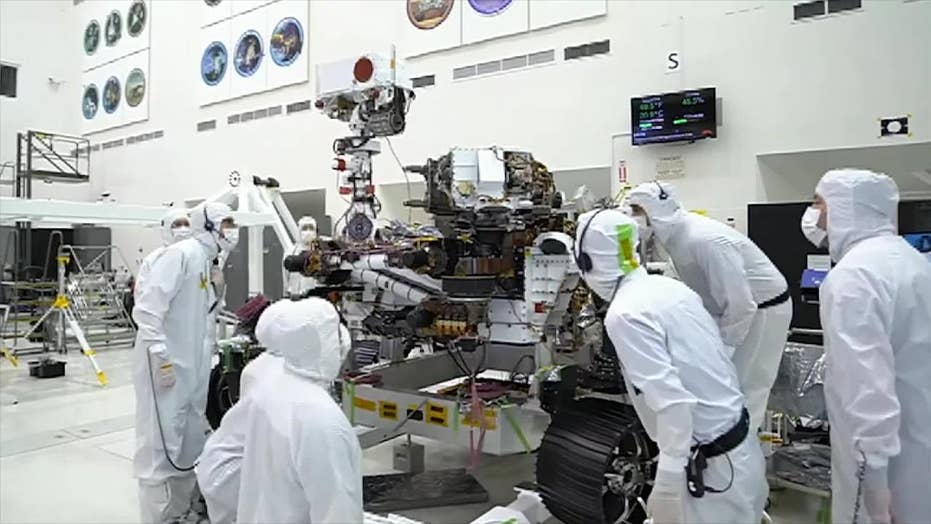 Raw video: Engineers test the rover's seven-foot long arm, the end of which is filled with sensors and tools for studying the red planet.

A time-lapse video shows NASA’s 2020 Mars Rover performing a very impressive ‘bicep curl.’ In the video, which was shot at NASA’s Jet Propulsion Laboratory in Pasadena, the 7-foot long arm can be seen wielding an 88-pound turret packed with sensors and cameras.

"This was our first opportunity to watch the arm and turret move in concert with each other, making sure that everything worked as advertised - nothing blocking or otherwise hindering smooth operation of the system," said Dave Levine, integration engineer for Mars 2020, in a statement. "Standing there, watching the arm and turret go through their motions, you can't help but marvel that the rover will be in space in less than a year from now and performing these exact movements on Mars in less than two."

The arm has five electrical motors and five joints, according to NASA. On the Red Planet, the arm and turret will be used to study the Martian surface.

The Mars 2020 mission will launch from Cape Canaveral Air Force Station in Florida next July. The rover is expected to reach the Martian surface on Feb. 18, 2021.

In November, the government space agency announced that it has selected the location where its Mars 2020 rover will land on the Red Planet.

The Red Planet continues to be a source of fascination. Scientists recently announced the discovery of layers of ice buried a mile beneath Mars’ north pole that could help unlock the Red Planet’s history.

Last year, in a major announcement, NASA revealed that the Curiosity rover had found organic molecules on Mars.

NASA’s long-term goal is to send a manned mission to Mars in the 2030s. However, former astronaut Buzz Aldrin thinks that a slightly later target date of 2040 is more realistic.

In an interview in 2016, the Gemini 12 and Apollo 11 astronaut told Fox News that by 2040, astronauts could visit Mars’ moon Phobos, which could serve as a sort of stepping stone to the Red Planet.

The U.S. has aimed to land the next man and the first woman on the Moon by 2024, although Collins told Fox News’ Neil Cavuto that NASA should be focusing its efforts on the Red Planet.