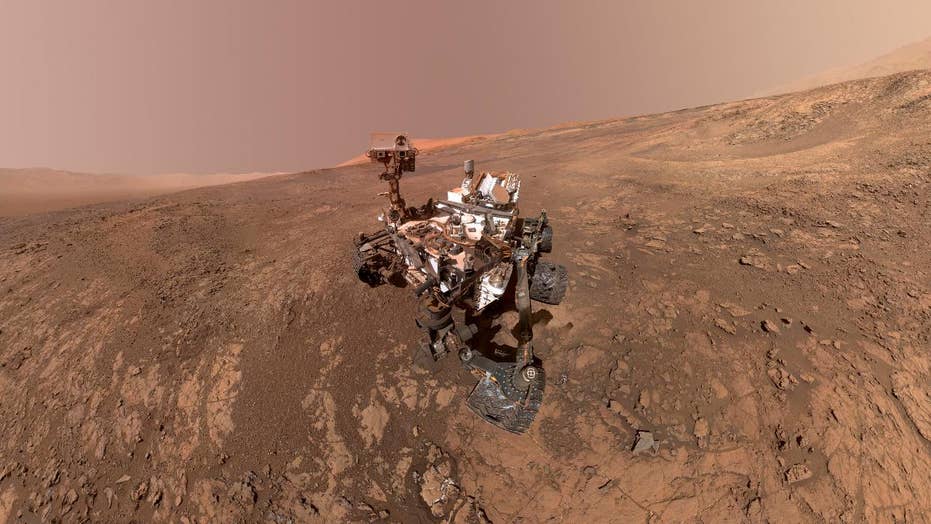 NASA makes a major announcement about the Curiosity rover’s findings on Mars. Does the discovery of organic material mean there is or was life on the red planet?

During a press conference at NASA’s Goddard Space Flight Center in Goddard, Md., and NASA’s Jet Propulsion Laboratory in Pasadena, Calif., scientists noted that the molecules provide fresh insight into the Red Planet.

“We found organic molecules in rocks from an ancient lake bed,” explained Jen Eigenbrode, research scientist at Goddard. A variety of molecules were identified, she added.

The rocks are billions of years old, according to NASA.

While NASA was at pains to explain that it has not discovered life on Mars, the organic molecules could provide vital clues.

“Organic compounds are fundamental to our search for life,” said Paul Mahaffy, director of the Solar System Exploration Division at
Goddard.

Described as the most technologically advanced rover ever built, Curiosity launched on Nov. 26, 2011. The rover landed on Mars' Gale Crate on Aug. 6, 2012, with the goal of determining whether Mars was ever able to support microbial life.

Eigenbrode explained that the organic molecules found on Mars are not specific evidence of life. "They could have come from things that are non-biological," she said.

Nonetheless, the molecules could provide a vital guide for scientists in their search for life on Mars. "All life that we know of is based on organic molecules," Eigenbrode explained. 'There's a whole suite of chemical and physical things that we could measure to find signatures of life."

The rover has already delivered some important scientific results. In 2013, for example, analysis of a rock sample collected by the vehicle showed that ancient Mars could have supported living microbes. In 2014 the rover measured a tenfold spike in methane, an organic chemical, in the atmosphere around it. At that time, the robotic laboratory also detected other organic molecules in a
rock-powder sample collected by its drill.

The Curiosity rover is providing additional details of Mars' methane, scientists confirmed Thursday. The rover has identified "a repeatable, identifiable pattern in the methane measurement," said Chris Webster, senior research fellow at NASA’s Jet Propulsion Laboratory. This, he explained, could be "key to unlocking the mysteries associated with Mars methane."

Space.com reports that Curiosity recently began drilling on the Martian surface for the first time in 18 months.

Chris Carberry, executive director of Explore Mars, a non-profit organization that aims to advance the goal of sending humans to Mars within the next two decades, said that Thursday’s announcement from NASA is exciting. “While the discovery of Martian organics - specifically methane - does not confirm life, it is yet another major piece of evidence that Mars may sustain microbial life,” he told Fox News, via email. “Even if this methane is not directly a product of life, it could be indicative of a subsurface environment suitable for life as water interacts with minerals on Mars.”

“NASA and other nations will be staging robotic missions over the next few years looking for evidence of past and present life, but these efforts should be increased so that we can confirm whether life exists on other planets, but also so that we can prepare before we send humans to the surface of Mars,” he added.

Mars looms ever larger in America’s space future. On May 5, NASA launched its InSight Mars lander on a 7-month journey to the red planet. The mission, which is managed by NASA’s Jet Propulsion Laboratory, will provide scientists with a wealth of data.

Other NASA missions to Mars are also planned, although the heat shield for the agency’s 2020 Mars Rover recently cracked during tests. Officials say that the incident won’t affect the mission’s 2020 launch date, according to Space.com. The six-wheeled robot is expected to arrive on Mars in 2021.

Earlier this year, NASA announced a project to build robotic bees capable of flying on Mars.

Private space company SpaceX is also working to reach Mars. Speaking at the South by Southwest festival earlier this year, SpaceX CEO Elon Musk said that he expects to see test flights of the firm’s Mars spacecraft next year.