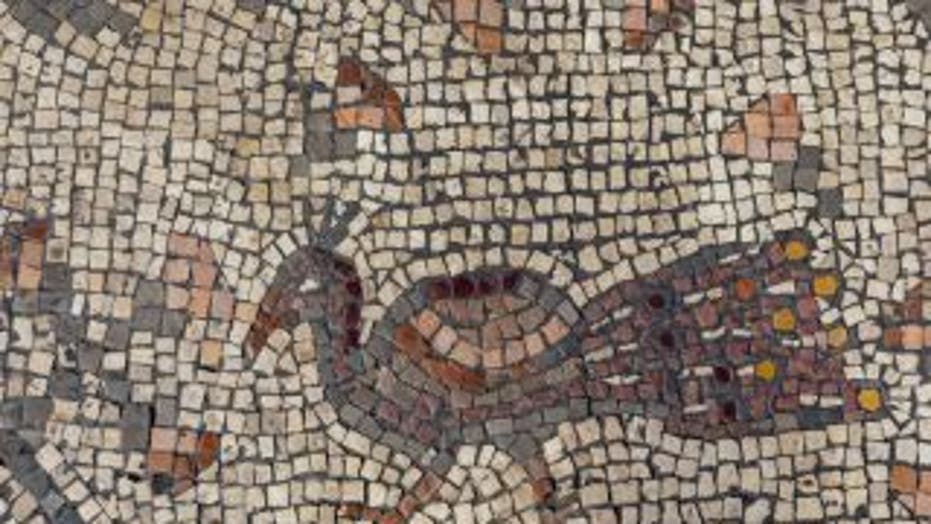 A colorful mosaic that may depict Jesus’ “feeding of the 5,000” has been discovered in the remains of an ancient church in Israel.

Researchers explained that the mosaic, which features inscriptions and depictions of baskets containing loaves and fishes, was uncovered at the “Burnt Church” at Hippos in northern Israel.

Overlooking the Sea of Galilee, the church was built sometime in the late fifth or early sixth century A.D. and was likely burnt during the Sasanian Empire’s conquest of the region in the seventh century A.D.

“The fire caused the church mosaic floor to be conserved in an amazing way, since the roof was burnt down and collapsed on the floor of the church and covered it in a layer of ash, thus protecting it from being damaged over time,” said the University of Haifa, which is involved in the excavation, in a statement. “Now, as the researchers have returned to expose it, they have found a magnificent mosaic, which was excellently preserved.”

The mosaic discovered at the 'Burnt Church' in Hippos. (The University of Haifa)

Birds, fish and fruit all feature in the mosaic, which is thought to depict the miracle described in Matthew 14:13-21: “Taking the five loaves and the two fish and looking up to heaven, he [Jesus] gave thanks and broke the loaves. Then he gave them to the disciples, and the disciples gave them to the people. They all ate and were satisfied, and the disciples picked up twelve basketfuls of broken pieces that were left over. The number of those who ate was about five thousand men, besides women and children.”

Experts feel that there are clear references to the New Testament depiction of the miracle in the mosaic.

THE BIBLICAL TOWN OF EMMAUS, WHICH IS LINKED TO JESUS’ RESURRECTION AND THE ARK OF THE COVENANT, MAY HAVE BEEN FOUND

"There can certainly be different explanations to the descriptions of loaves and fish in the mosaic, but you cannot ignore the similarity to the description in the New Testament: for example, from the fact that the New Testament has a description of five loaves in a basket or the two fish depicted in the apse [of the church], as we find in the mosaic”, said Michael Eisenberg, Ph.D., head of the Haifa University excavation team, in a statement. “In addition, the mosaic at the burnt church has a depiction of 12 baskets, and the New Testament also describes the disciples who, at the end of the miracle, were left with 12 baskets of bread and fish.”

However, Eisenberg also notes that there are also some differences between the mosaic the New Testament miracle. For example, some of the baskets in the mosaic contain fruit, and in some places, there are three, as opposed to two, fishes.

In a separate project, researchers claim to have identified an anchor from St. Paul’s shipwreck on Malta. According to Christian tradition, the apostle was shipwrecked on the Mediterranean island during an ill-fated first-century journey to Rome.

Archaeologists working in Israel also say that they may have discovered the Biblical town of Emmaus, which is linked to Jesus’ resurrection and the Ark of the Covenant.

The fortification dates back around the second century B.C. when ancient Greek influence in the region was strong. Tel Aviv University Professor Israel Finkelstein told Haaretz that the walls were repaired during the later period of Roman rule in the first century A.D.

Elsewhere, soldiers at a paratrooper base in Southern Israel recently uncovered a Biblical-era watchtower.