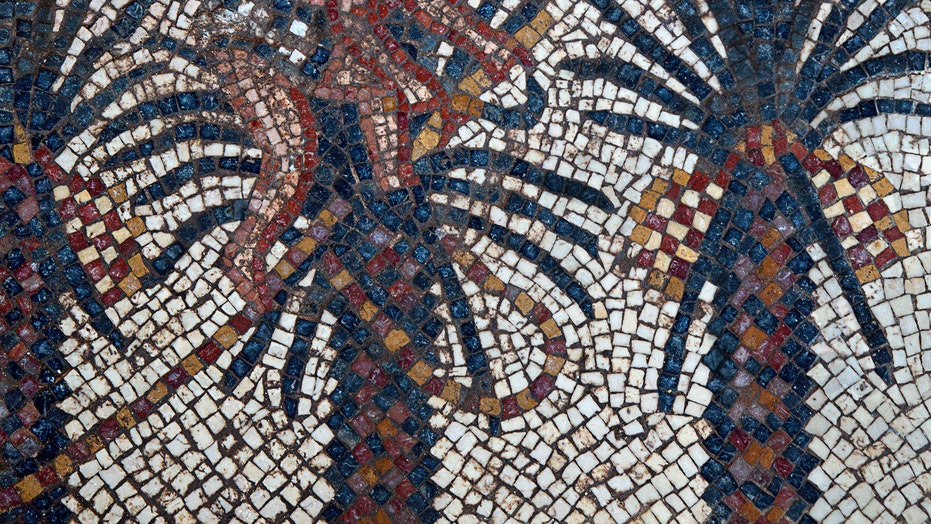 The mosaic, which depicts a scene from the book of Exodus, was found at the site of a fifth-century synagogue in Huqoq.

Excavation director Jodi Magness, a professor at University of North Carolina at Chapel Hill, said the mosaic was the first depiction of the episode of Elim from Exodus 15:27 ever found in ancient Jewish art. “Elim is where the Israelites camped after leaving Egypt and wandering in the wilderness without water,” she explained in a statement, noting that the mosaic is separated into three registers or horizontal strips.

STUNNING BIBLICAL MOSAICS REVEALED IN DETAIL FOR THE FIRST TIME

One register showed clusters of dates being harvested by loincloth-clad agricultural workers while another showed a row of wells and date palms, she explained. “On the left side of the panel, a man in a short tunic is carrying a water jar and entering the arched gate of a city flanked by crenellated towers. An inscription above the gate reads, ‘And they came to Elim’,” Magness added.

“The Daniel panel is interesting because it points to eschatological, or end of day, expectations among this congregation,” said Magness, in the statement. “The Elim panel is interesting as it is generally considered a fairly minor episode in the Israelites’ desert wanderings ­­– which raises the question of why it was significant to this Jewish congregation in Lower Galilee.”

The mosaics have been removed from the site for conservation.

Magness and the archaeological team during the summer 2019 dig at Huqoq. (Jim Haberman, Courtesy: UNC-Chapel Hill)

The excavation marked the ninth year of digs at the Huqoq site. The first mosaics were discovered in 2012. Between 2014 and 2017, archaeologists discovered mosaics depicting Noah’s Ark, the parting of the Red Sea, Jonah and the fish and the Tower of Babel, painting a fascinating picture of life at the ancient site.

In 2018 researchers also announced the discovery of a stunning mosaic depicting a biblical scene from Numbers 13:23. Labeled "a pole between two," the panel showed two spies sent by Moses to explore the biblical land of Canaan.

Another mosaic discovered at Huqoq includes a depiction of Samson. There also has been an ongoing debate about whether a mosaic uncovered in 2016 portrays Alexander the Great. The purported Alexander the Great mosaic was the first non-biblical story ever found decorating an ancient synagogue.

A mosaic depicting the building of the Tower of Babel. (Jim Haberman, Courtesy UNC-Chapel Hill)

Experts said the wealth of mosaics show that Jewish life in the surrounding village flourished during Christian rule in the fifth century. This challenges a widely held view that Jewish settlement in the area declined during that period.

“So, archaeology fills this gap by shedding light on aspects of Judaism between the fourth to sixth centuries CE – about which we would know nothing otherwise,” Magness explained. “Our discoveries indicate Judaism continued to be diverse and dynamic long after the destruction of the second Jerusalem temple in 70 CE.”

The Huqoq Excavation Project has involved experts from a host of universities, including Baylor University, Brigham Young University and the University of Toronto, as well as the Israel Antiquities Authority and Tel Aviv University.