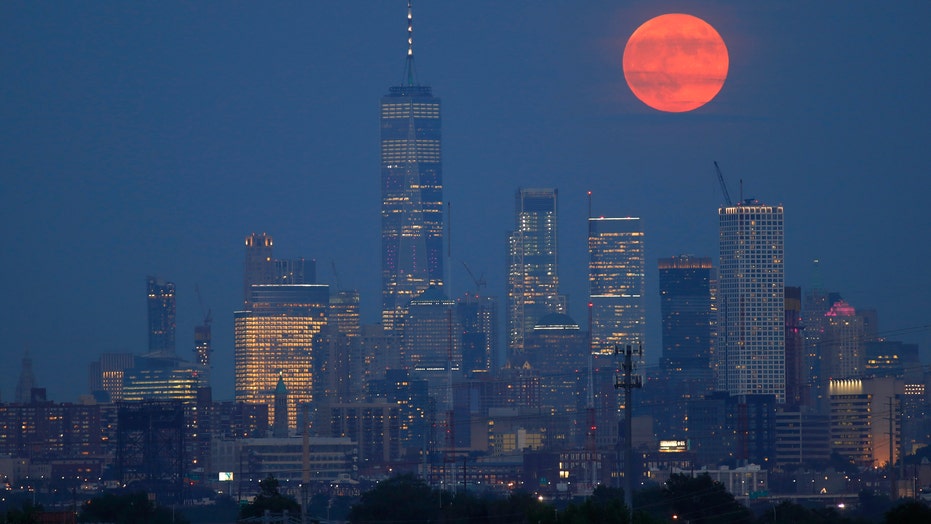 Skywatchers are in for a treat on July 4, when the buck moon, or July full moon, rises in the sky. There will also be a partial lunar eclipse.

“July’s full moon will rise after sunset in the evening of Saturday, July 4, before reaching peak illumination at 12:44 A.M Eastern Time on Sunday, July 5,” explains The Old Farmer’s Almanac. “Look towards the southeast to watch it rise above the horizon.”

The Old Farmer’s Almanac explains that the buck moon earned its name because it occurs at a time of the year when a buck’s antlers are “in full growth mode.” Another name for the buck moon is the thunder moon.

NASA notes that there will also be a partial penumbral eclipse of the moon. In a penumbral lunar eclipse, part of the moon passes through the outer part of Earth's shadow, the space agency says.

On the 50th anniversary of the launch of Apollo 11, the full buck moon rises above the skyline of lower Manhattan and One World Trade Center in New York City on July 16, 2019 as seen from Kearney, New Jersey - file photo. (Photo by Gary Hershorn/Getty Images)

“The moon will be close enough to opposite the Sun that its northern edge will pass through the partial shadow of the Earth,” explains NASA on its website. “Although visible from the Americas, this slight dimming of part of the moon should be difficult or impossible to notice without instrumentation. The moon will appear full for about three days around the eclipse, from Friday evening into Monday morning, making this a full moon weekend.”

The buck moon, however, will not be as high in the sky as the strawberry moon. “For 2020, this full Moon in early July is closer to the summer solstice and will be lower in the sky than the full Moon in June,” explains NASA on its website.

The May full moon, known as the flower moon, was the last supermoon of 2020.

July is also a good time for seeing Venus and Mercury, according to NASA. “Wednesday morning, July 8, 2020, will be when the brightest of the planets, Venus, reaches its greatest brilliancy,” it explains, on its website. “Starting the morning of Thursday, July 16, 2020, the planet Mercury will be above the horizon at the time morning twilight begins (at least for the Washington, D.C. area), making all five of the naked eye planets visible (if you have a clear view of Mercury on the horizon in the east-northeast and Jupiter and Saturn on the horizon in the southwest).”