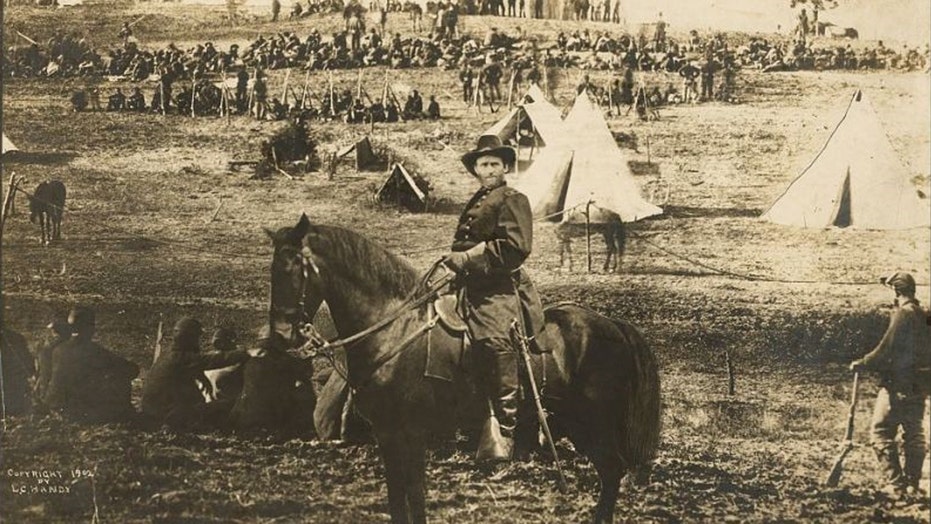 This Civil War photo isn’t what it seems

At first glance, this photo entitled “General Grant at City Point” appears to be a rare shot of Grant reviewing his troops during the Civil War.

But take a closer look at the image and questions begin to emerge, according to a blog post on the Library of Congress web site.

It does look like Grant but the “head joins the body at an odd angle and the uniform seems wrong for the time period,” according to the Library of Congress. If the photo would have been taken at City Point, it would have been shot in 1864. But at that point, Grant would have had three stars on his uniform to reflect his title as General-in-Chief for the union forces. In the photo, he has just one star.

Then, there is the horse that Grant sits atop. His favorite at the time was named Cincinnati but, according to the blog post,  Cincinnati didn’t have white hair around his ankle as this horse does. It also doesn’t look anything like any of Grant’s other horses.

The image itself raises doubts. If you look closely, there are scratches around Grant’s head and the horse’s body. That would indicate, according to the Library of Congress, that this image was made by combining several images.

Surprised? Don’t be. Before Photoshop became all the rage, photographers even in the 18th century developed techniques to make a photo montage.

“They exposed negatives multiple times, sandwiched two negatives together, or pasted parts of different pictures together and photographed the result,” according to the blog post. “This montage is skillfully done and hard to detect unless you look twice.”

Related: Man says photo at center of Civil War mystery is a 30-year-old hoax he did as a teen

The horse and body from this image of Maj. Gen. Alexander M. McCook taken near Washington, D.C. was used in the Grant photo montage. (Library of Congress)

To understand how the image was created, you have to start with the notation "Copyright 1902 by L.C. Handy.”

The copyright date would suggests the image was create long after the Civil War. Levin C. Handy (1855-1932) was the nephew of Mathew Brady, who oversaw the making of many Civil War photographs that have survived in public and private collections. He had access to Civil War photos through his uncle’s negatives, many of which eventually entered the collections of the Library of Congress.

But which images did Handy use to create this montage?

Confederate prisoners captured at the battle of Fisher's Hill, VA. Sent to the rear under guard of Union troops, 1864. (Library of Congress)

Let’s start with Grant’s head, which appears to have come from a June 1864 portrait of Grant at Cold Harbor, Va. The body and the horse actually weren’t of Grant, but Major General Alexander McDowell McCook. He spent much of his time in the Western theater of the war, not in the Petersburg area of Virginia. It appears the photograph was made near Washington, D.C.

For the background, it appears the photographer turned to a a photo of Confederate prisoners captured at Fisher’s Hill, a battle that took place in the Shenandoah Valley of Virginia in September 1864.

“The Confederate soldiers had no connection to Grant and were nowhere near City Point, but their plight became a handy background to highlight Grant’s leadership nearly 40 years later,” according to the blog post.