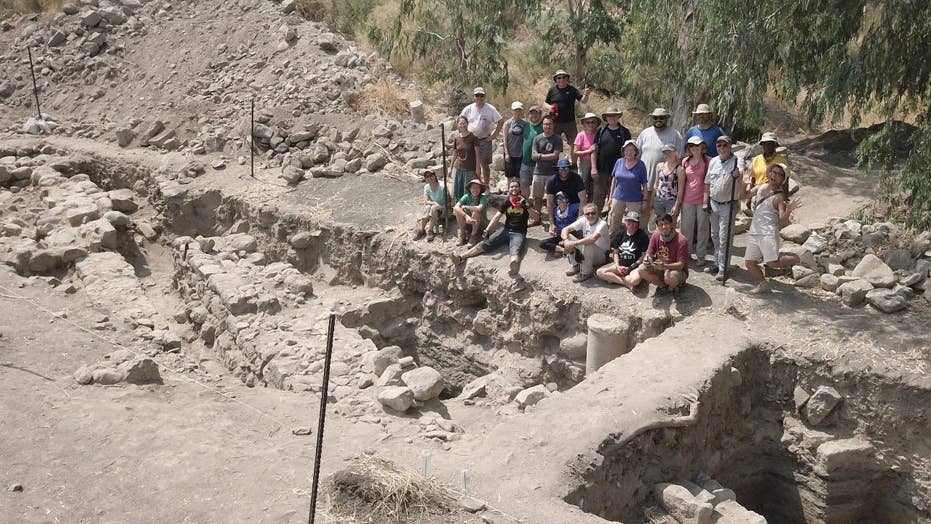 Archaeologists say they may have located the lost Biblical city of Bethsaida-Julias, which was the home of three of Jesus’ apostles

Experts believe they have found the lost Roman city of Julias, formerly the village of Bethsaida, which was the home of Jesus' apostles Peter, Andrew and Philip.

Last month, archaeologists from the Kinneret Institute for Galilean Archaeology at Kinneret College, Israel and Nyack College in New York, completed excavations at el-Araj on the northern shore of the Sea of Galilee. El Araj has long been considered a possible location of ancient Julias, which was also known as Bethsaida.

“The results of this season’s excavation indicate that el-Araj should now be considered a leading candidate for the lost city of Jesus’ Apostles,” explained the excavation team, in a statement emailed to Fox News.

“There are indications that we’re excavating Bethsaida-Julia - we have to continue digging to confirm and clarify," Prof. Steven Notley of Nyack College, the dig’s academic director, told Fox News. “This is really one of the few [biblical sites] that has remained lost.”

While many experts had previously assumed there was no human presence at el-Araj during the Roman period, this summer’s excavations have shed new light on the site. A previously unearthed Byzantine structure, for example, offered plenty of clues to the archaeologists. More than 30 coins found beneath the structure’s floor dated its construction to the 5th century A.D.

Below the Byzantine era level, however, Roman era pottery dating back to between the 1st and 3rd centuries A.D. was found, along with a bronze coin from the late 2nd century and a silver denarius coin of the Emperor Nero that dates from 65 to 66 A.D.

Some 6.6-feet below the Byzantine floor, a Roman period wall was also discovered. Adjacent to the wall was a large section of black-and-white mosaic floor with mortar, clay bricks and ceramic vents typical of Roman bathhouses.

The archaeologists note that Roman-style baths were uncommon in rural settlements, so their presence at el-Araj indicates an urban site, making it a strong candidate for the city of Julias.

Geological research also suggests that the Sea of Galilee, the second lowest lake in the world, was at a lower level than previously thought during the Roman era. Experts had long thought the lake was 686 feet below sea level in Roman times, with the el-Araj site underwater until the Byzantine period centuries later. The Roman wall, however, was discovered at a depth of 692 feet below sea level.

Geologists studying el-Araj found that the site was covered with mud and clay, possibly from flooding of the nearby Jordan river, and abandoned sometime between 250 A.D and 350 A.D. "The Roman layer was buried at a certain period by these sediments derived from the nearby outlets of the Jordan River and Meshushim stream," explained Prof. Noam Greenbaum of Haifa University, who participated in the excavation. "We hope to deepen and extend our study in the future in order to clarify the full picture."

The site appears to have been resettled towards the end of the 4th century A.D. during the Byzantine period.

EXPERTS UNCOVER EVIDENCE OF ANCIENT JERUSALEM’S DESTRUCTION BY THE BABYLONIANS

The Byzantine structure at el-Araj also offers a fascinating glimpse into the site’s biblical past. Small gilded glass blocks called tesserae that form part of a mosaic were found, suggesting that the building was once an important church. Archaeologists note that Willibald, the bishop of Eichstatt in Germany, visited the Holy Land in 725 A.D., and describes visiting a church at Bethsaida built over the remains of the house of apostles Peter and Andrew. “It may well be that the current excavations have unearthed evidence for that church,” explained the archaeologists, in their statement.

Other archaeologists have been looking to prove that the nearby site of e-Tell is the location of Bethsaida-Julias.

Excavations at el-Araj will start again in June 2018. “We’re looking right now at trying to do another five seasons,” said Notley.