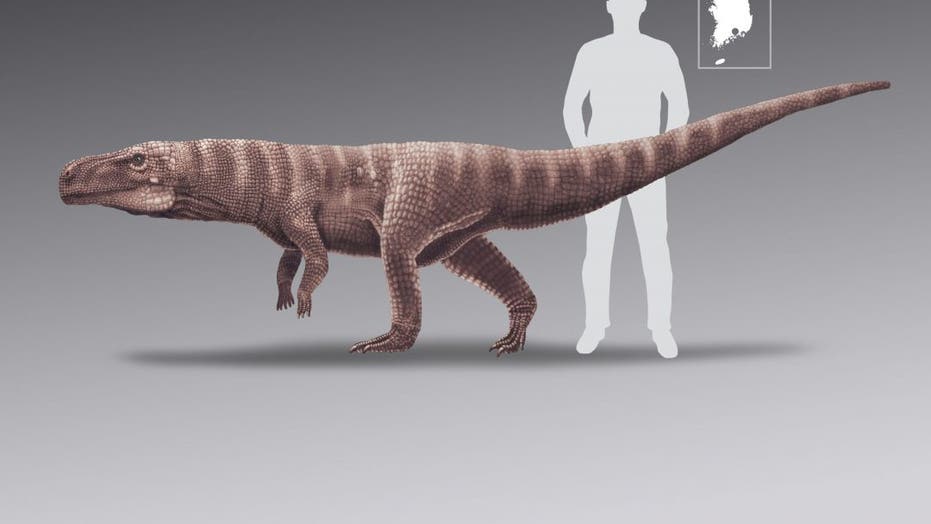 Footprints found in modern-day South Korea that were thought to have been made by pterosaurs are instead from a 13-foot crocodile that lived between 110 and 120 million years ago and walked on two legs, researchers say.

According to a new study, published in Scientific Reports, the crocodile weighed nearly 1,000 pounds, had razor-sharp teeth and measured approximately four meters (13.1 feet). Known as Batrachopus grandis, the ancient croc likely fed on anything it could go after, including dinosaurs, according to experts.

"Typical crocodiles walk in a squat stance and create trackways that are wide," Chinju National University of Education professor Kyung Soo Kim said in a statement.

"Oddly, our trackways are very narrow looking — more like a crocodile balancing on a tight-rope," Kim added. "When combined with the lack of any tail-drag marks, it became clear that these creatures were moving bipedally."

B. grandis was identified from nearly 100 10-inch footprints that were discovered in Sacheon City, South Korea.

"They were moving in the same way as many dinosaurs, but the footprints were not made by dinosaurs," Kim continued. "Dinosaurs and their bird descendants walk on their toes. Crocodiles walk on the flat of their feet leaving clear heel impressions, like humans do."

Researchers also discovered footprints of other animals, including dinosaurs, mammals and frogs, in addition to those of the ancient crocodile.

"Fossil crocodile tracks are quite rare in Asia, so finding an abundance of nearly one hundred footprints was extraordinary," University of Queensland paleontologist Dr. Anthony Romilio added in the statement.

The fact the footprints came from B. grandis also shed new light on pterosaurs. "They [the footprints] support the strong consensus that pterosaurs were obligate quadrupeds, not bipeds," the researchers wrote in the study's abstract.

"As an animal walks, the hind feet have the potential of stepping into the impression made by the hand and 'over-printing' it, but we find no evidence of this at these Korean sites," Romilio continued. "It isn't due to poor preservation either, because these fossils are spectacular, they even have the fine details of the toe-pads and scales on their soles preserved."

Researchers have learned a great deal about ancient crocodiles in recent months. In February, a "bonecrushing" 7-foot long crocodile –­ nicknamed the "T. Rex of its time" –­ that walked on all fours but but used its hind legs to run 230 million years ago, was discovered in Brazil.

In September 2019, fossils of a 30-foot crocodile-like creature that lived 210 million years ago and ate herbivore dinosaurs and mammals were discovered in southern Africa.

Separately in September 2019, the identity of a massive, 15-foot prehistoric crocodile that lived 180 million years ago was properly identified nearly 250 years after its fossils were first discovered.