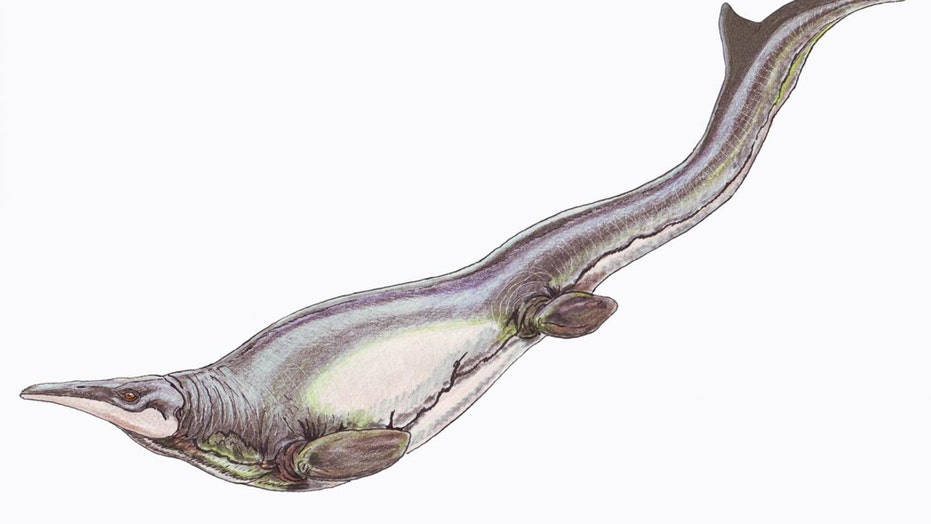 Mosasaurs may have been one of the most terrifying reptiles to live during the age of dinosaurs, given its enormous size and jaws. But a new study suggests the massive sea monster may have had another advantage — its unique ability to swim.

The apex predator, which lived between 145.5 million and 65.5 million years ago, had the ability to do a "muscular breast stroke" that added great bursts of speed when trying to catch prey. The research was presented at the annual 2019 Geological Society of America meeting.

"We know that mosasaurs most likely used their tails for locomotion," the study's lead author, University of Southern California doctoral student Kiersten Formoso, said in a statement. "Now we think that they also used their forelimbs, or their tail and forelimbs together."

Plotosaurus bennisoni is a mosasaur from the Upper Cretaceous (Maastrichtian) North America. (Credit: Restoration illustration from Wikimedia Commons, CC BY 3.0.)

Formoso added that the dual swimming method could make mosasaurs unique among four-limbed creatures, both alive and extinct.

To get an idea of how mosasaurs swam, the researchers looked at fossils of a Plotosaurus, an extinct genus of mosasaur. They also used measurements of mosasaurs' pectoral girdles from other studies to come up with their hypothesis.

They found that the pectoral girdle was asymmetric, which allowed it to push water away from its body as it swam, similar to the modern-day breaststroke. Using this, as well as its enormous tail, the mosasaur could either swim short distances at high speeds or long distances.

"Like anything that swims or flies, the laws of fluid dynamics mean that burst versus cruising is a tradeoff," the study's co-author, Mike Habib, added. "Not many animals are good at both."

While it's difficult to understand the biomechanics of an extinct creature, one which reached up to 50 feet in length according to LiveScience, Formoso said one thing is certain: "Mosasaurs swam unlike anything else."

The new study follows news of a fossil of an 85 million-year-old newborn mosasaur discovered in Kansas in October 2018.