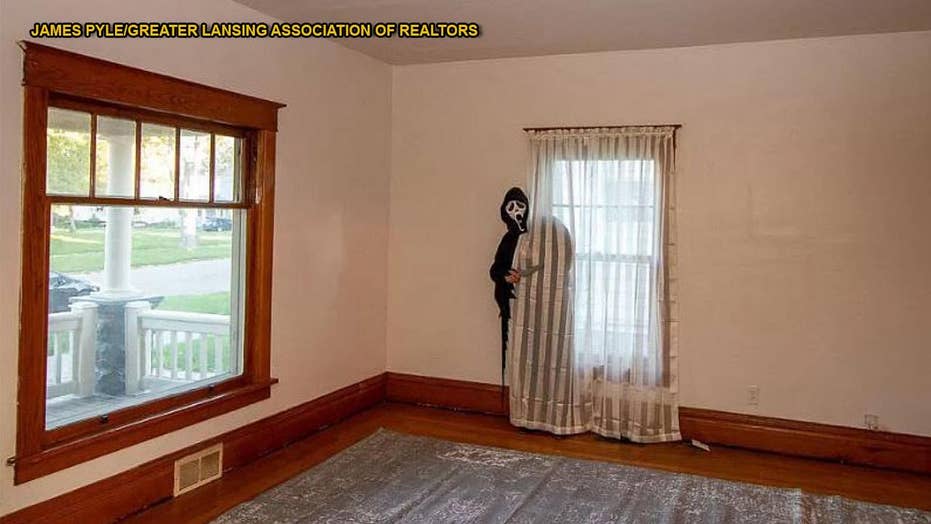 A Michigan realtor decided to generate attention for a property listing by including creepy photos of a man dressed as the killer from the 'Scream' franchise lurking around the house.

There’s something scream-inducing about this house.

A real-estate agent had a terrifyingly unique way to make a house in Lansing, Mich., stand out from the crowd — and now he's making headlines for the haunting approach.

While most listings feature images that show off the property’s various assets, this agent took things in a scarier direction: James Pyle, a realtor for Century 21, decided to generate attention for the listing by including — in each listing photo — creepy shots of a man dressed as the killer from the “Scream” franchise lurking around the house, the Lansing State Journal reports.

Thankfully, the masked-murderer isn’t a permanent feature of the four-bedroom house.

LEGALLY HAUNTED NEW YORK HOME BACK ON THE MARKET

The film icon, known as Ghostface, can be spotted carving a pumpkin in the kitchen, raking leaves in the backyard and playing with Legos in the living room. He’s also shown in more traditional (i.e. scary) poses, lurking around corners in the basement and bedrooms.

Pyle says that Halloween is one of his favorite holidays, the Lansing State Journal reports. Having worked as a real estate agent for 15 years, he claims that he’s wanted to promote a house using a horror movie character for a very long time.

According to Pyle, the backdrop of the house and timing of the listing came together to create the perfect opportunity for him to finally dress up as the slasher-flick villain.

"My goal was 1,000 views," Pyle told the Lansing State Journal. "I just wanted people to take a look at the listing and smile, laugh and have fun with it. The reaction has been a lot of fun."

The news outlet reports that the photos appeared to work in generating interest, as the listing has apparently been viewed over 20,000 times across various platforms.