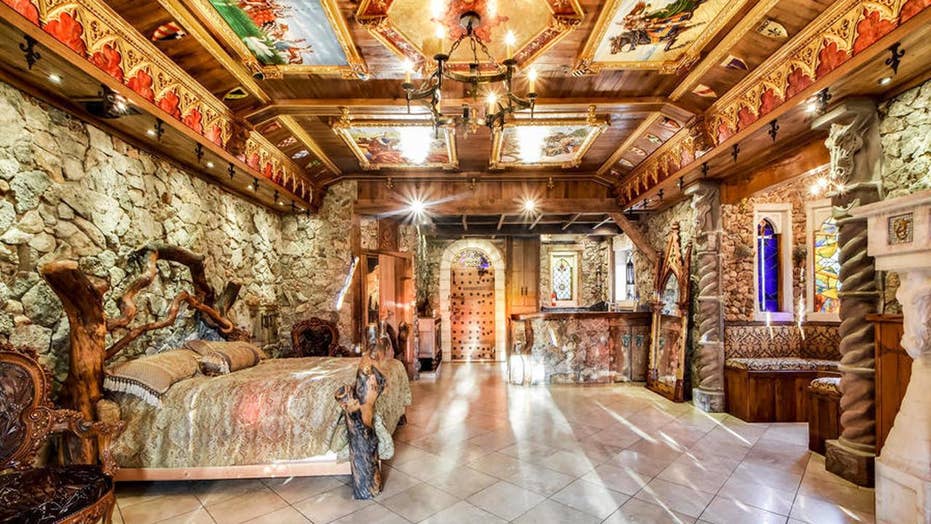 Live like a king in a 'Game of Thrones'-style mansion

Hot Houses: Inside a custom-built, mini Medieval castle in Texas, a Manhattan home filled with iconic pop art and the Versailles of Georgia

Each week Fox News picks its Top 3 over-the-top luxury listings from Mansion Global. This week we have the most expensive listing in all of Georgia, the Manhattan townhouse of Mitchell Lichtenstein and a gothic mansion in Texas straight out of Game of Thrones.

If you’re looking for a mansion with some serious bragging rights then look no further than this ornate Atlanta property nicknamed “the Versailles of Georgia.”

It just happens to be the most expensive home on the market in the state with an asking price of $48 million—nearly 50 times more expensive than the already pricey neighborhood median price of $1.08 million.

At 17,000 square feet, the brick and masonry home has seven bedrooms, eight full bathrooms and three half bathrooms.

Naturally the front door was imported from France. It’s worth taking a moment to gaze at its splendor before venturing into the foyer with its carved plaster ceiling inspired by the arched Braccio Nuovo hall in the Vatican. Yes, that Vatican. A 19th century French Neoclassical chandelier made from bronze and crystal hangs below the ornate coffered ceiling.

An ancient funerary stele dating back to the 5th to 3rd century B.C. decorates the stairwell alongside a French Baccarat crystal basket light fixture.

The round, saline swimming pool and pool house are set back from the main house while an narray of antique statuary, including a pair of 18th century Flemish limestone cherubs, decorate the lawn.

If you’re looking for something a little less ornate, but just as big a conversation starter look no further than Mitchell Lichtenstein’s historic row house in Manhattan.

Lichtenstein, the son of pop artist Roy Lichtenstein, has lovingly restored the 170-year-old home. Today the property’s 13 rooms blend ornate, period architectural elements with the whimsical art of Lichtenstein’s father—a leader of the 1960s pop art movement who is known for his parodies of comic strips, like the famous “Drowning Girl” that hangs prominently at the Museum of Modern Art on West 53rd Street.

This is the first time the 24-foot-wide Greek Revival townhouse has been listed in the public market. The asking price is $25 million.

Behind the brick exterior, the four-story home reflects the dynamic tastes of pre-Civil War New York, which includes a blend of Classical and Gothic Revival influences. Sometime in the late 1870s to early 1880s, owners built an addition onto three floors that included three formal entertaining rooms and a sunny breakfast room on the garden level.

The 24-foot-wide townhouse was built in 1847. The garden design dates back to the 1930s, when owners converted a basic yard into a “cloister garden.”  A sunny dining room was added in the late 1870s or early 1880s.

We’re still months away from the new season of the HBO hit Game of Thrones. If you just can’t wait any longer maybe this Austin home with a little Westeros flair is up your alley.

The 5,500-square-foot property in Austin, Texas, can help you realize all of your royal fantasies and is on the market for just $2.285 million.

The property comes complete with a 14th century cottage which has a dry stacked stone interior, crafted stained glass, ceiling paintings that tell a knight’s exemplary tale with a plethora of family crests and Gothic moldings atop a stained wood ceiling.

With a swimming pool surrounded by columns and exotic trees, the Renaissance style backyard is truly a marvel to behold. It actually won second place in a national backyard competition hosted by “Good Morning America” in 2012.