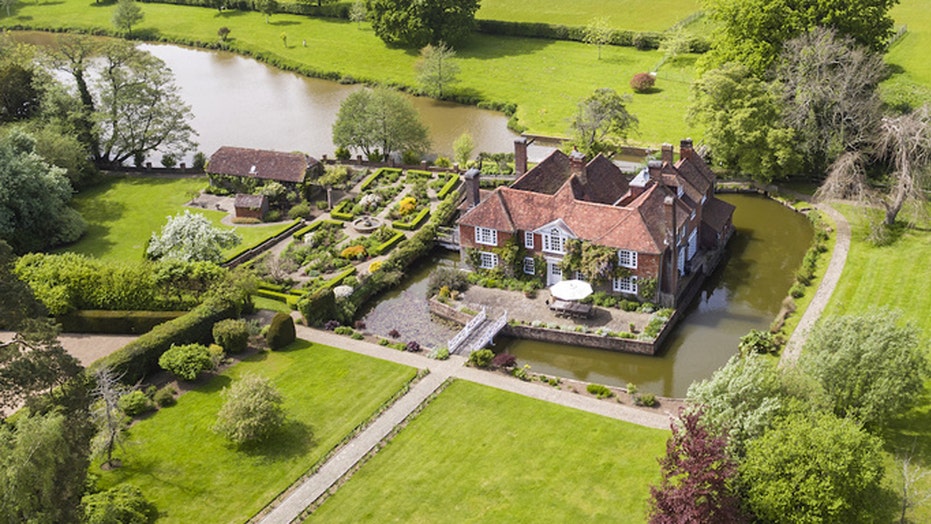 This English mansion has its own moat

Hot Houses: A country manor with its own moat, a private peninsula in tropical Turks and Caicos, and a Hamptons home featured on 'Seinfeld'

This week we have a miniature private island in England surrounded by a moat, an even more private peninsula in Turks & Caicos and a Hamptons mansion made famous on Seinfeld.

Not all private islands are in remote tropical destinations. Check out this little gem on England’s smallest “private island” in East Sussex.

What makes it an island you ask? Well, the moat of course.

Sitting on a total of 44 acres, the gorgeous country manor is completely encircled by the moat, dug out nearly half a century ago by the property’s former rector.

The 6,416-square-foot house has been updated with contemporary touches while maintaining its period character with Tudor, Elizabethan and Georgian elements. Spanning three stories, it has seven bedrooms, four reception rooms, a study, a drawing room, two kitchens and a dining hall.

Exposed timber, oak paneling and flooring and original fireplaces are featured throughout the house. The spacious sitting room has four pairs of French doors with Juliet balconies opening directly over the moat.

There are spectacular views from nearly every room moat to the formal gardens.

There is also a barn and a cottage on the premises, ideal for housing staff and guests. The barn, constructed in the 17th century, has four bedrooms, a game room with kitchenette and shower room and its own private terrace.

The sprawling grounds are accessible via three timber footbridges. There’s a pristine fence-enclosed tennis court, a Victorian-style greenhouse and a swimming pool.

Forget the private island. What about a private peninsula in the Caribbean instead?

This 15,000-square-foot home in Turks and Caicos makes for a wildly impressive vacation getaway.

The property is home to seven bedrooms and 12 bathrooms as well as a two-bedroom guest cottage.

Designed to maximize the 1,400 feet of water frontage, the rooms open to outdoor lounge areas, decking, and dining nooks, making it hard to tell inside from out.

The home, listed at $25 million, also features lush landscaping and gardens filled with both native and imported flora and fauna.

If you’re looking for something a little closer to home, this Hamptons mansion could be the perfect property for you.

There’s certainly plenty for guests to talk about. The property was used for the famous 1994 “Seinfeld” episode set out in Long Island. You know the one we’re talking about. It made the word “shrinkage” famous.

The 4,000-square-feet mansion is set on 1.4 acres and offers 228 feet of beachfront. There’s a pool, two-car garage, four bedrooms with en-suites and a powder room, two fireplaces, and a second story deck. The guest wing is separate from the master bedroom.