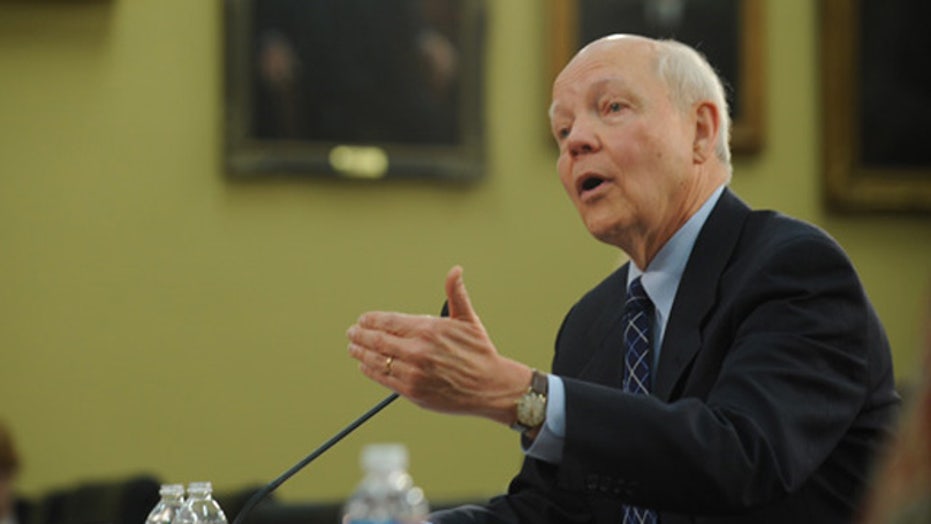 Embattled IRS Commissioner John Koskinen weathered another round of heated questioning at a Monday night hearing where lawmakers challenged his credibility over the discovery that years' worth of emails from ex-IRS official Lois Lerner have gone missing.

House Oversight Committee Chairman Darrell Issa, R-Calif., who has subpoenaed a former IRS lawyer to testify at another hearing on the emails Tuesday morning, publicly tangled with Koskinen on Monday night. In one fiery exchange, Issa told him: “We have a problem with you and you have a problem with credibility.”

Koskinen appeared at the rare evening hearing on Capitol Hill to answer questions about the missing emails from Lerner, a key figure in the committee’s probe into the agency’s targeting of conservative groups. The agency claims the emails were lost in a 2011 computer crash.

He earlier had faced frustrated lawmakers on Friday before the House Ways and Means Committee. The commissioner has shown little hesitation in sparring with Republicans, inside and outside the hearing room. After Monday's session, he told reporters he did not come out of retirement "to play games."

In a heated back-and-forth with Issa, Koskinen said he had fulfilled his promise to the committee to provide it with all of Lerner’s emails and that there was no way to recover ones the agency said were lost in 2011.

“If you have a magical way for me to do that, I’d be happy to hear about it,” Koskinen sarcastically told Issa.

“I’ve lost my patience with you,” Issa, R-Calif., shot back.

In his opening statement, Issa showed a long series of clips from mostly Republican members at a March hearing, where lawmakers repeatedly asked Koskinen for Lerner’s emails. Issa said Koskinen promised he would provide all of Lerner’s emails, and gave no indication he would not be able to do so.

Koskinen said he first learned there was a problem with Lerner's computer in February, but didn't learn that the emails had been lost until April. The IRS notified Congress about the lost emails on June 13.

“We are just questioning what your word is worth....do we have to grill you (for) days or weeks or months?” Issa asked.

Koskinen said that the Treasury Inspector General for Tax Administration, the watchdog that uncovered the IRS targeting scandal, has launched an investigation into the missing emails.

"It is not unusual for computers anywhere to fail, especially at the IRS in light of the aged equipment IRS employees often have to use in light of the continual cuts in its budget these past four years," Koskinen said. "Since Jan. 1 of this year, for example, over 2,000 employees have suffered hard drive crashes.

"So it should be clear that no one has been keeping this information from Congress," he added.

Lerner is the former head of the division that processes applications for tax-exempt status. The Oversight Committee is investigating the handling of applications from Tea Party and other political groups.

Since the IRS revealed that the cache of Lerner's emails was missing, Issa has suggested that Lerner had intentionally destroyed her emails with the help of the agency. The committee’s ranking member, Rep. Elijah Cummings, D-Md., said in his prepared opening remarks that it was clear Issa’s claims were inaccurate, and the situation simply a failure of electronic record-keeping at a federal agency.

“Republicans have been trying desperately—and unsuccessfully—for more than a year to link this scandal to the White House,” Cummings said. “Rather than continuing on this path, I sincerely hope we will turn to constructive legislation with concrete solutions to help federal agencies run more effectively and efficiently.”

Koskinen said there was no evidence that Lerner intentionally destroyed the emails. To the contrary, he claimed, the IRS went to great lengths trying to retrieve lost documents on Lerner's computer, even sending it to the agency's forensic lab.

Koskinen had a long record of government service before taking over as head of the IRS at the start of the year. He served in different positions under Presidents Bill Clinton and George W. Bush, and worked for the District of Columbia.

Lerner, who is now retired from the IRS, has refused to testify at two Oversight Committee hearings, invoking her constitutional right against self-incrimination.

Late Monday, the White House said that Jennifer O'Connor, a former IRS employee who is currently employed in the White House counsel's office, would appear before the committee Tuesday morning. O'Connor, who worked at the IRS from May to November 2013, helping the agency gather documents related to congressional investigations, had been subpoenaed earlier Monday evening by Issa, who said he wanted to ask her about the missing emails.