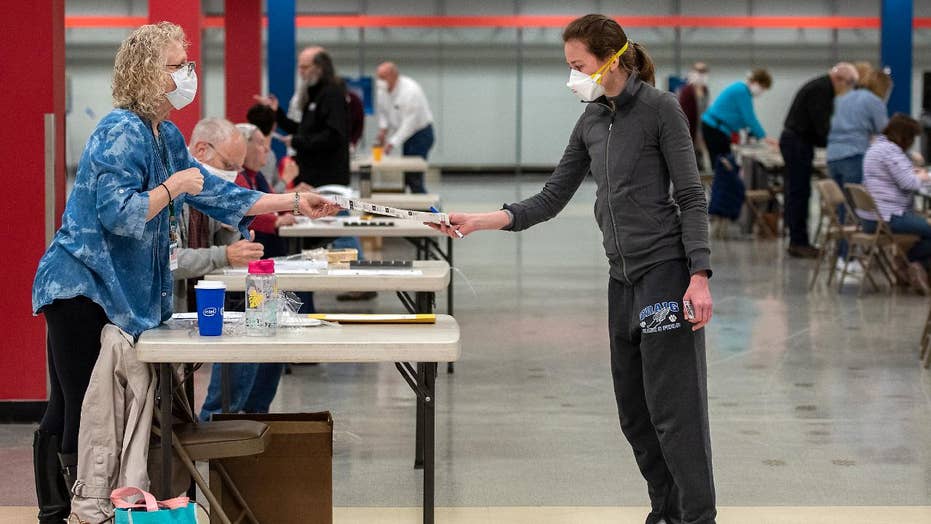 Democratic presidential candidates Joe Biden and Bernie Sanders are on the ballot as voters cast ballots in the Wisconsin primary; Peter Doocy reports.

The Wisconsin National Guard mobilized more than 2,400 citizen-soldiers and airmen to serve as poll workers during Tuesday's presidential primary, held amid the coronavirus outbreak.

While many other states have delayed their primaries, Wisconsin proceeded despite more than 2,500 confirmed cases of the virus in the state and 92 deaths.

The Guard personnel were dressed in civilian attire and served at polls in 71 of Wisconsin’s 72 counties in an effort to support the state's election committee and clerks "due to a critical shortage of poll workers resulting from the ongoing COVID-19 pandemic," Capt. Joe Trovato said.

"While serving as poll workers is a unique and unprecedented mission for the Wisconsin National Guard, serving the state in a time of need is a familiar concept for the state’s citizen-soldiers and airmen," he added.

Robert Forrestal, left, wears a full face chemical shield to protect against the spread of coronavirus, as he votes Tuesday, April 7, 2020, at the Janesville Mall in Janesville, Wis. (Associated Press)

They started mobilizing Sunday, less than 48 hours after receiving their mission, Trovato said.

On Monday, they reported to local clerks and received several hours of training, while assisting to set up polling sites before Tuesday -- staying ready to help despite uncertainty regarding the controversial election during the COVID-19 pandemic.

With courts deciding the election could proceed, voters -- including the elderly -- headed to the polls despite the state's stay-at-home order. They waited in long lines, some within the recommended six feet of social distancing. The Wisconsin National Guard supported many of the volunteers at the polls, who were also elderly.

“We’re making a positive impact because there a lot of people who volunteer who are elderly,” Sgt. Monica Miggins, a fueler from Madison who worked at one of the state's polling stations, said. “So this helps out with letting them avoid contact with people by letting younger soldiers take their duties.”

The unprecedented challenge created chaotic scenes across the state -- and a variety of health risks for voters and the elected officials who fought to keep polls open.

Guard personnel took on a variety of duties as poll workers throughout the day, including Maj. Marcia Garcia, who said she "did a little of everything."

“I assisted with the ballots and polling book, feeding ballots into the machine, cleaning the polling location and directing traffic,” she added. “The Guard members ensured Wauwatosa could provide full election staffing for all its districts.”

Brig. Gen. Robyn Blader, Wisconsin’s assistant adjutant general for readiness and training, was responsible for coordinating the Wisconsin National Guard’s response. She served as a liaison with the Wisconsin Elections Commission in the days and weeks leading up to the election.

"[Blader] helped orchestrate the Wisconsin National Guard’s logistical support to WEC by procuring and distributing supplies needed to ensure polling stations were as safe as possible such as hand sanitizer, wipes, spray bottles, and personal protective equipment before more than 2,400 troops mobilized to support the poll worker mission," Trovato said.

Many served alongside fellow civilians in communities throughout the state, with most of the National Guard members assisting counties they resided in accordance with state election laws.

“This mission has provided a unique opportunity to serve our communities like we’ve never done before,” Capt. Alicia Dorsett said. “For me, serving my community became quite literal when I was assigned to report to the polling place in my hometown of Poy Sippi, Wisconsin."

Efforts by the National Guard came as Wisconsin Assembly Speaker Robin Vos declared the election was "incredibly safe" -- even as he wore a face mask, safety glasses, gloves, and a full protective gown.

Vos was helping the National Guard in ensuring a polling station functioned smoothly.

Polls closed Tuesday night, but a court ruling appeared to prevent results from being made public earlier than next Monday to ensure absentee ballots are counted.