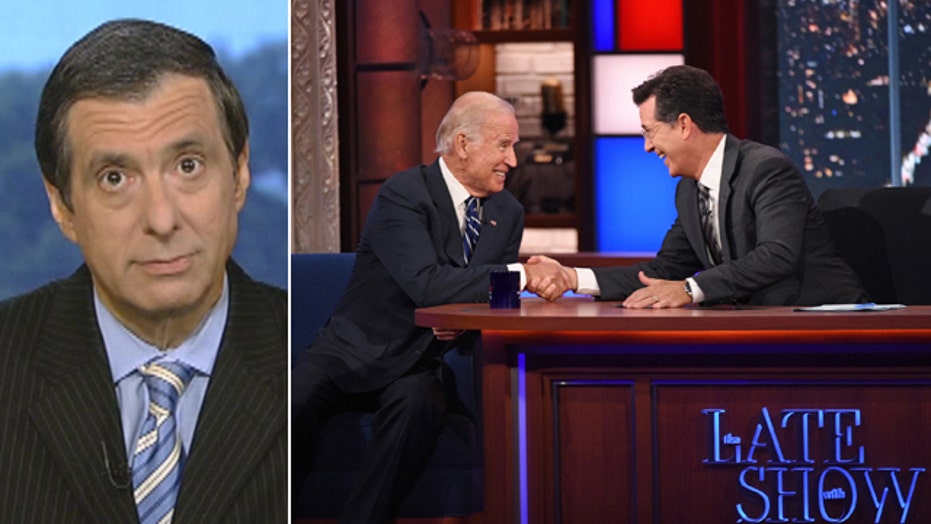 Kurtz: When TV is fueled by emotion

It was a remarkable moment for Joe Biden, for Stephen Colbert, and for late-night TV.

The most memorable television is often fueled by emotion, but you rarely see the real thing 11:30 at night. Colbert is a professional comedian, just like Jimmy Fallon and Jimmy Kimmel. The whole idea is to keep things light, keep things moving, mix a little substance into interviews with public figures but err on the side of charming anecdotes.

And emotion is not a quality to be underestimated in presidential politics. One of the most frequent complaints about Hillary Clinton, besides her botched handling of the email mess, is that she’s overly cautious and calculating. That’s why there was so much attention paid to her choked-up moment in that New Hampshire coffee shop in 2008, and to the moving way she talked about her late mother in last week’s ABC interview with David Muir. It helped melt her ice-queen image just a bit.

No one has ever accused Biden of failing to show emotion. He wears it on his sleeve.

Biden’s unabashed, backslapping, run-over-and-kiss-the-ladies style has its downsides, as we’ve seen with numerous gaffes. But people see the real human being.

Suddenly, in what might have been the twilight of his career, the vice president is hearing calls for him to jump into the Democratic race as Hillary Clinton falters, and seeing polls in which he’s climbed to 20 percent in Iowa as a non-candidate (which also means he’s not being attacked).

But this comes at a time when he is grieving over the death of his son Beau, the former Delaware attorney general. And this for a man who began his Senate career after a car accident that claimed the life of his first wife and one of his children.

So he sits down with Colbert, who, as it happens, lost his father and two brothers in a plane crash when he was 10. The new “Late Show” host quickly dropped the comic persona when Biden began talking about the searing pain of family loss, and shared some of his as well.

This was no longer about entertainment. It was more like public therapy.

Colbert would ask questions like how has your faith helped you through this, prompting Biden to say:

“First of all it's a little embarrassing to make this about me. There are so many people - even in the audience - who have had losses as severe, or worse than mine and didn't have the incredible support I had. I have an incredible family. And I feel so self-conscious. The loss is serious, it's consequential, but there's so many other people going through this.”

And when Colbert got around to asking the elephant-in-the-room question:

“I don't think any man or woman should run for president unless number 1, they know exactly why they would want to be president and number 2, they can look folks out there and say I promise you, you have my whole heart, my whole soul, my energy, and my passion to do this,” Biden said. “And I'd be lying if I said that I knew I was there.”

Colbert praised the veep at the end, practically endorsed him, which of course demonstrates his left-leaning politics. But he seemed on some level to be responding to Biden’s heartfelt answers.

“This is why I think people want you to run for president,” Colbert said. “And I know that’s an emotional decision. But it’s going to be emotional for a lot of people if you don’t run. And sir, I just want to say I think your experience and your example of suffering and service is something that would be sorely missed in the race.”

Of course, the pundits are still doing their political calculations. The next morning, Politico ran a piece headlined “Joe Biden insiders see a campaign taking shape”:

“In and around the vice president’s office, planning and outreach for the expected run is intensely underway, creating an energy that looks to those close to it like a campaign taking shape. They’re talking to donors, they’re connecting with old supporters, they’re starting to think about potential campaign staff hires, according to people familiar with the activity.”

Well, maybe. But you can’t have a campaign apparatus without a candidate. And Biden seems to be pleading with people to understand he’s not ready to run. "Many friends believe that he ultimately will not run,” says the New York Times.

Or maybe he’s feeling his way toward a candidacy in the media spotlight.

If he doesn’t take the plunge, the Colbert interview may soon be forgotten—except by those who saw a professional politician unafraid to act like a grieving father.