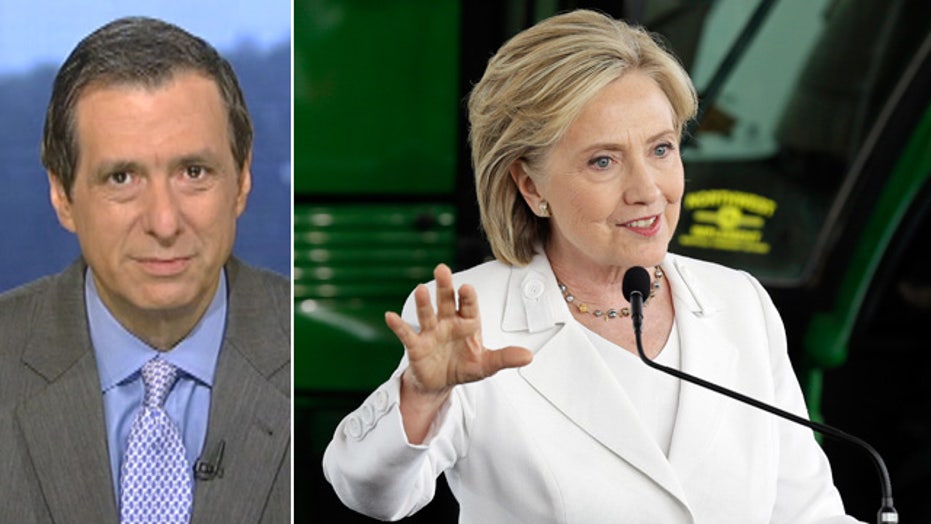 Kurtz: Why Hillary can't be sorry

That, apparently, is not in her DNA.

She’s fine saying she didn’t make “the best choice” in having a private email server, that she hadn’t thought much about it, but in her MSNBC sitdown with Andrea Mitchell, she would not apologize.

That would involve removing the armor she has been wearing against the media for a quarter century.

The only time Clinton dropped the S-word was when she said “I am sorry that it’s confusing”—which some people took to mean she’s sorry that many of you folks out there aren’t sophisticated enough to understand these issues.

To me, Hillary's approach goes beyond this particular interview on Friday, beyond the email mess, to an essential quality at the heart of her candidacy.

She has learned to calibrate her answers after being battered over controversies going back to Whitewater and the Rose Law Firm. She is deeply, instinctively wary of the press, but also of political enemies, congressional investigators, and the “vast right-wing conspiracy.” She doesn’t want to hand her detractors so much as a phrase that can be turned against her—and that may be behind her disastrous decision not to use government email at the State Department.

The result is that a woman who is warm in private comes across in public as guarded and legalistic, which erodes her connection with average folks. When asked how she feels about many voters regarding her as dishonest, she says not great and quickly pivots back to her talking points.

Whatever you may say about Donald Trump’s rhetorical excesses, you’re seeing his bombastic self on display.

In fact, Clinton contrasted her style with Trump’s when dismissing his attacks on her top aide Huma Abedin (who is married to Anthony Weiner, described by Trump as a “perv.”)

“Loose talk, threats, insults – they have consequences,” Hillary said. “The president of the United States needs to be careful about what he or she says.”

That is true. It’s also true that a candidate for president can be too careful.

Mitchell followed up on that point, asking about Joe Biden and Bernie Sanders and whether it hurts her campaign that many voters don’t view her in the same vein, as “authentic.”

Hillary could have paused and delivered an emotional answer. She didn’t.

“That is not my experience when campaigning,” she said in deflecting the question.

It was a contrast to the one moment in the 2008 campaign—at a New Hampshire coffee shop, briefly shown by MSNBC—when she choked up, generating enough positive press to win the primary.

Even her top strategists, realizing how wooden she comes across, leaked their new talking points to the New York Times. Today's piece has this remarkable headline: "Hillary Clinton to Show More Humor and Heart, Aides Say."

Hillary Clinton brings a wealth of government experience to the campaign. But she can’t change who she is. At a time when she is under FBI investigation, when a former staffer is pleading the Fifth (which Mitchell -- who was told she only had 15 minutes -- didn't have time to mention), she is reacting like a cautious politician -- this in a year when many voters are fed up with the establishment and politics as usual.

As for Andrea Mitchell, she displayed a knack for asking tough questions in a soft-spoken style, drilling down on the email controversy for more than 10 minutes, not letting her long relationship with the Democratic front-runner deter her from doing her job. In this interview, she was the real winner.