Rep. Jeff Van Drew is fighting to keep his seat in a tight contest against Democratic rival Amy Kennedy as the House race for New Jersey's second congressional district has gained national attention.

Van Drew is currently trailing behind his opponent by an average of about 3.5 percentage points, according to the latest polling from RealClearPolitics.

Here's what you should know about Rep. Jeff Van Drew before stepping into a voting booth:

WHO IS AMY KENNEDY? 5 THINGS TO KNOW ABOUT NEW JERSEY'S DEMOCRATIC CONGRESSIONAL CANDIDATE

1. He is a former dentist and small business owner

Van Drew started out as a small business owner in Atlantic County where he practiced dentistry for over 35 years. He earned his Bachelor of Science from Rutgers University and his Doctor of Dental Surgery from Fairleigh Dickinson University Dental School. In addition, Van Drew is a lifelong member of the Oceanview Fire Company.

2. He started in the Democratic Party

Van Drew got his start in politics as Cape May County Freeholder from 1994 to 1997. He was also mayor of Dennis Township from 1994-1995 and 1997-2003. In addition, he served in the New Jersey General Assembly from 2002 to 2008 and as the former Democratic Senator representing New Jersey's District 1 from 2008 to 2019. In 2018, Van Drew was elected as the Democratic Congressman representing New Jersey’s Second District.

He currently serves on the House Homeland Security and Education and Labor committees.

3. He joined the Republican party after voting against Trump's impeachment

A year into Van Drew's first term in Congress, he was one of only three Democrats to break with the party on impeaching President Trump. At the time, he described Trump’s conduct to USA Today as “unsavory” but not impeachable.

Following the no vote, Van Drew announced in December of 2019 that he would be switching to the Republican Party, offering a pledge of "undying support" to the president. The move earned him the nickname "Switcheroo Van Drew" by some of his former Democratic colleagues and his opponent Amy Kennedy.

4. He has been endorsed by President Trump

President Trump endorsed Van Drew in the House Race for New Jersey's 2nd Congressional District during the pair's meeting at the White House in December 2019.

Following the endorsement, Van Drew was one of the featured speakers at the final night of the 2020 Republican National Convention.

During his speech, he said President Trump "made me feel more welcome in the Oval Office than Nancy Pelosi ever made me feel in her caucus."

Van Drew said he reconsidered his party affiliation with the rise of the Squad of liberal House Democratic lawmakers. “The party had moved from liberal to radical,” he said. “This new Democrat Party wasn't just for higher taxes, now they were for open borders, against our police and against our God-given rights.”

In addition, he noted that Democratic leaders told him if he did not vote for impeachment, his life “would be made difficult” and he would not be able to run for office again.

“When the Democrats tried to order me around, I was ready, willing and able to say I've had enough with their radical, socialist agenda,” Van Drew said. “Do you really believe Joe Biden is ready, willing – and most of all – able to do the same?”

“Joe Biden is being told what to do by the radicals running my former party. The same radicals trying to install him as their puppet president,” he continued.

Van Drew added that “a lot” of Democrats support President Trump and “are disgusted for what their old party – what my old party – has become.”

“Here's my advice: Be true to who you are now, not who the Democrats used to be,” he concluded. 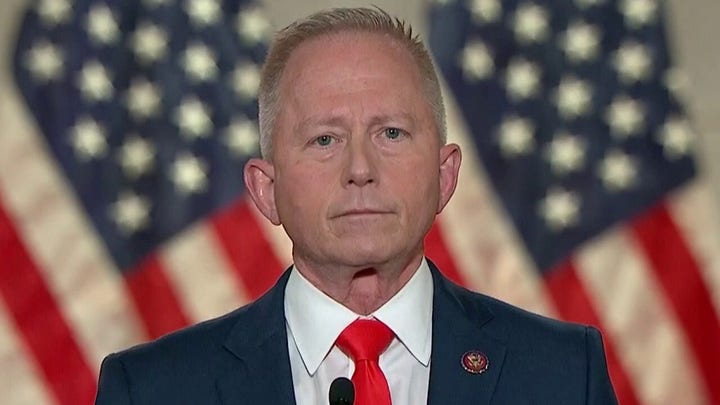 During a debate with his opponent, Amy Kennedy, last month, Van Drew pushed back against the movement to defund the police, arguing that it means officers "won’t get the equipment, the safety equipment, the vests, whatever else they need to make sure that they stay alive as they take bullets for you.”

However, Van Drew also agreed with his opponent that global warming should be taken seriously, that beach replenishment is not an optimum option but needs to continue, and that flood insurance for shore residents must be maintained while at the same time making houses more flood resistant.

He also said during the debate that while abortion services should not be eliminated, he could not support late term abortions. He also agreed with Kennedy that the federal government should stop classifying marijuana as a controlled drug, and allow it to help with medical research.

“We need to punish the people who are creating and actually committing the crimes,” he said. “Not legal gun owners.”

As for the coronavirus, Van Drew does not support a national mask mandate.

"Each state is different," Van Drew said. "So, what Wyoming needs to do and North Dakota needs to do may be very different than what the city of Washington or the city of New York has to do. That’s – you know, there’s a little bit of ‘states’ rights’ here.

"I would support that we all should be careful and we should be doing what’s medically correct," he added. "But there are good doctors and good leaders in those areas that can make those decisions."

In terms of the economy, he has expressed support for a second round of coronavirus stimulus, including continued funding for the Payroll Protection Program (PPP), enhanced protections and funding for first responders and healthcare workers, and opening the stimulus check availability to college-age dependents.

However, he's also stressed the importance of reopening and getting Americans back to work. He introduced the Health Smart Air Travel Act in October, which if enacted would seek to develop new technologies that mitigate virus transmission in airports and passenger aircrafts.

While Van Drew doesn't believe the Affordable Care Act isn't as good as it should be, he argues that he needs to see a better replacement before voting to repeal it.

"I would say there are some pieces of [a replacement]," he said, "but for an entirely appropriate plan, I would need to see more of it."

5. He won the 2020 Republican primary by a wide margin

Despite some Democratic voters feeling betrayed by Van Drew's party switch, Republican voters in the Garden State accepted the congressman into the party with open arms.

However, a victory against his Democratic challenger Amy Kennedy is likely to be more of an uphill battle, in part because of his party switch.

According to a Monmouth University Poll last month, nearly half of voters in the district are bothered by Van Drew being elected as a Democrat but now running for reelection as a Republican, with 35 percent saying it bothers them a lot and 12 percent a little, while 51 percent say it does not bother them.

Nearly 9-in-10 Democrats (87%) and half of independents (46%) are bothered by the incumbent’s change of party affiliation, compared with 15% of Republicans who feel that way. About 12 percent of Drew’s constituents say they were not aware of his party change.

However, a recent Stockton University poll of 676 likely voters reveals the race will likely be closer, with Kennedy leading Van Drew by just 1 percentage point, 46 percent to 45 percent — well within the poll’s margin of error.

The race between Van Drew and Kennedy is currently ranked as a toss up by Cook Political Report.