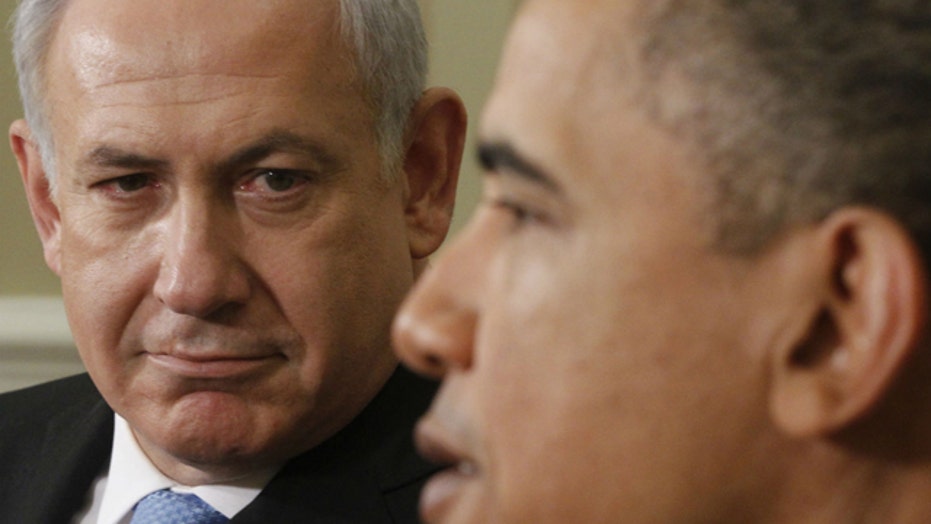 Greta: Obama has explaining to do to Jews, Netanyahu, Israel

'Off the Record,' 2/18/15: The president can't find time to meet with our ally, the Israeli prime minister, snubbed France by no-showing at anti-terror rally, yet had time to interview with YouTube celebs and Buzzfeed and golf all weekend

WASHINGTON – In what is becoming an increasingly nasty grudge match, the White House is mulling ways to undercut Israeli Prime Minister Benjamin Netanyahu's upcoming trip to Washington and blunt his message that a potential nuclear deal with Iran is bad for Israel and the world.

There are limits. Administration officials have discarded the idea of President Obama himself giving an Iran-related address to rebut the two speeches Netanyahu is to deliver during his early March visit. But other options remain on the table.

Among them: a presidential interview with a prominent journalist known for coverage of the rift between Obama and Netanyahu, multiple Sunday show television appearances by senior national security aides and a pointed snub of America's leading pro-Israel lobby, which is holding its annual meeting while Netanyahu is in Washington, according to the officials.

The administration has already ruled out meetings between Netanyahu and Obama, saying it would be inappropriate for the two to meet so close to Israel's March 17 elections. But the White House is now doubling down on a cold-shoulder strategy, including dispatching Cabinet members out of the country and sending a lower-ranking official than normal to represent the administration at the annual policy conference of the American Israel Public Affairs Committee, the officials said.

Vice President Joe Biden will be away, his absence behind Netanyahu conspicuous in coverage of the speech to Congress. Other options were described by officials, who spoke only on condition of anonymity because they were not authorized to discuss internal deliberations.

Netanyahu's plan for a March 3 address to a joint meeting of Congress has further strained already tense ties between the U.S. and Israel. Congressional Republicans orchestrated Netanyahu's visit without consulting the White House or State Department, a move the Obama administration blasted as a break in diplomatic protocol. Some Democratic lawmakers say they will boycott the speech.

U.S. officials believe Netanyahu's trip to Washington is aimed primarily at derailing a nuclear deal with Iran, Obama's signature foreign policy objective. While Netanyahu has long been skeptical of the negotiations, his opposition has increased over what he sees as Obama's willingness to make concessions that would leave Iran on the brink of being able to build a nuclear weapon. His opposition has intensified as negotiations go into overdrive with an end-of-March deadline for a framework deal.

"I think this is a bad agreement that is dangerous for the state of Israel, and not just for it," Netanyahu said Thursday.

The difference of opinion over the deal has become unusually rancorous.

The White House and State Department have both publicly accused Israeli officials of leaking "cherry-picked" details of the negotiations to try to discredit the administration. And, in extraordinary admissions this week, the administration acknowledged that the U.S. is withholding sensitive details of the talks from Israel, its main Middle East ally, to prevent such leaks.

The rebukes have only emboldened the leader of Israel, whose country Iran has threatened to annihilate. He has a double-barrel attack on the Iran talks ready for when he arrives in Washington. Not only will he address Congress, he will also deliver similar remarks at the AIPAC conference, an event to which administrations past and present have traditionally sent top foreign policy officials.

But maybe not this year.

An AIPAC official said Friday that the group has not yet received any reply to its invitation for senior administration figures to attend the meeting that starts March 1. The official stressed that last-minute RSVPs are not unusual, but the White House has been signaling for some time that a Cabinet-level guest may not coming.

Instead, the administration is toying with the idea of sending newly installed Deputy Secretary of State Antony Blinken to speak to the conference, according to officials familiar with internal discussions on the matter. But it's possible Treasury Secretary Jack Lew could attend.

Biden and Secretary of State John Kerry, who have both previously addressed AIPAC, will be out of the country on foreign travel that appears to have been arranged to make them unavailable to speak. Biden will be visiting Uruguay and Guatemala on a trip that was announced after Netanyahu's speech was scheduled, while the State Department announced abruptly this week that Kerry will be traveling to as-yet-determined destinations for the duration of the AIPAC conference.