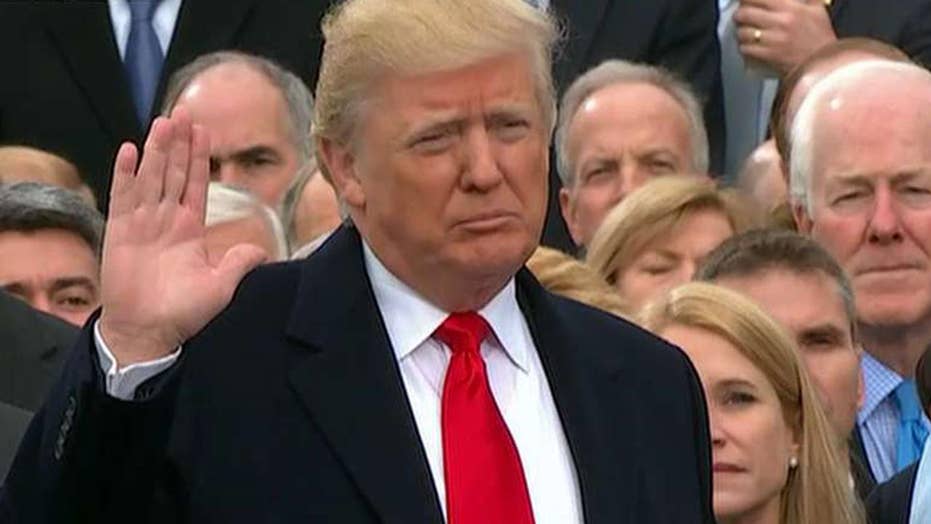 The Wall Street Journal reports that federal prosecutors are looking into whether President Trump's inaugural committee misspent any of the $107 million raised in donations; Doug McKelway reports.

The Trump administration and the president's inaugural committee said Thursday they had no knowledge of a reported investigation by federal prosecutors into whether the committee misspent some of the money it raised to stage Trump's swearing-in last year.

The Wall Street Journal reported that the U.S. attorney's office in Manhattan was in the early stages of the probe exploring whether big-money donors gave money to the committee in the hope of access to -- or influence within -- the administration or policy concessions.

According to the paper, the investigation arose in part out of materials seized as part of the federal investigation into Michael Cohen, Trump's onetime personal attorney. Those materials included a conversation between Cohen and a onetime adviser to Melania Trump who raised concerns about how the inaugural committee was spending money.

In a statement, the inaugural committee said it was "not aware of any pending investigations and has not been contacted by any prosecutors. We simply have no evidence the investigation exists."

The committee said its finances "were fully audited internally and independently and are fully accounted. Moreover, the inauguration's accounting was provided both to the Federal Election Commission and the IRS in compliance with all laws and regulations. These were funds raised from private individuals and were then spent in accordance with the law and the expectations of the donors."

White House Press Secretary Sarah Sanders told Fox News' "The Story with Martha MacCallum" Thursday that the matter "didn't have anything to do with the president" or the first lady.

"The president was focused on the transition and building out a new government and preparing to take office. The role that the president had in the inauguration was to raise his hand and take the oath," said Sanders, who accused Democrats of "going to plan – I would say Plan B, but this is more like Plan D or E or F to take this president down."

TRUMP REVEALS CHIEF OF STAFF SEARCH DOWN TO 5 CANDIDATES

On Wednesday, Cohen was sentenced to three years in federal prison after pleading guilty to campaign finance violations, tax evasion and lying to Congress about Trump’s past business dealings in Russia.

President Trump says he did not his former personal attorney to break the law; reaction and analysis from the 'Special Report' All-Stars.

The Journal reported that prosecutors enlisted Rick Gates, Trump's onetime deputy campaign manager and deputy chairman of the inaugural committee, to provide information about the inaugural fund's spending and donors. Earlier this year, Gates pleaded guilty to one count of conspiracy against the U.S. and one count of making false statements to FBI agents. Last month, Special Counsel Robert Mueller told a federal judge in a court filing that Gates was cooperating with "several ongoing investigations" and could not yet be sentenced.

MAXINE WATERS CALLS FOR TRUMP IMPEACHMENT: 'HE IS DANGEROUS'

In all, the Trump inaugural committee raised $107 million, more than double the previous record of $53 million raised for Barack Obama's first inauguration in 2009.