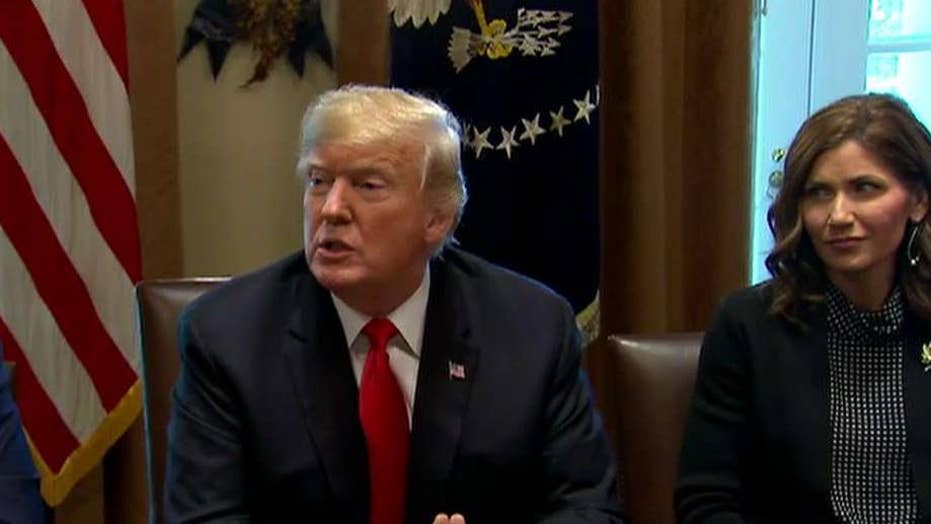 Speaking at a meeting with the nation's governors-elect at the White House on Thursday, President Trump revealed that he's down to five candidates to replace departing Chief of Staff John Kelly.

“We are interviewing people now for chief of staff,” Trump said. He said the shortlist of "five people" was consisted of “mostly well-known” contenders who were all “terrific people" and "really good ones."

Speaking to Reuters earlier in the week, Trump remarked that there were "at least 10, 12 — 12 people that want it badly" and that "everybody wants it. Who doesn't want to be one of the top few people in Washington, D.C.?"

In an exclusive interview with Fox News' Harris Faulkner on "Outnumbered Overtime," Trump offered a clue about what he wants for  Kelly's replacement.

Trump's son-in-law and senior adviser Jared Kushner similarly told Fox News' "Hannity" exclusively on Monday that the president has been weighing his options carefully for a good personality fit.

"The president will make the right choice for chief of staff when he is ready," Kushner said. "And, hopefully he’ll choose someone he’s got great chemistry with, a great relationship with, who will help him navigate the next couple of years, with all the good opportunities that will emerge, to keep pushing forward."

No clear frontrunner to replace John Kelly at White House

Counselor to the President Kellyanne Conway told Fox News on Tuesday that Kelly, a retired Marine Corps general, might stay on briefly into the new year while the president finds a replacement. Trump initially had said Kelly would be gone by year's end.

Vice President Pence's Chief of Staff Nick Ayers announced Sunday he will leave the White House at the end of the year, leaving unclear who will replace Kelly, as Ayers was the favorite for that role.

While speculation has grown over whom Trump ultimately will pick, one candidate -- House Freedom Caucus chair Rep. Mark Meadows, R-N.C., was taken out of contention on Wednesday.

“Congressman Mark Meadows is a great friend to President Trump and is doing an incredible job in Congress,” White House Press Secretary Sarah Sanders said in a statement released Wednesday. “The president told him we need him in Congress, so he can continue the great work he is doing there.”

“I’ve had the best job in the world, representing the people of western North Carolina and working alongside President Trump these last two years to give the forgotten men and women of America a voice in their government,” Meadows said in his own statement. “I know the president has a long list of tremendous candidates for his next chief of staff, and whomever it is will have my total support moving forward.”

Some unlikely contenders also have thrown their hat into the ring. Former Major League Baseball slugger Jose Canseco tweeted this week to Trump that “u need a bash brother for Chief if [sic] Staff.” Canseco told his “little buddy” he has “a secret reorg plan already.”

"Also worried about you looking more like a Twinkie everyday," Canseco wrote. "I will buff you up daily workouts."