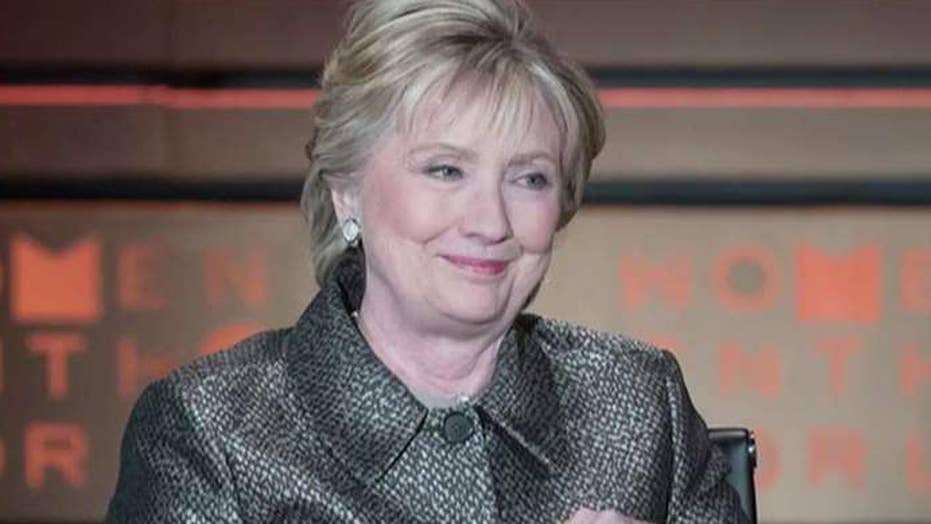 Where's the probe on Clinton-Russia collusion?

Hillary Clinton campaign chief John Podesta has a tangled money trail links him to a green-energy company that received $35 million from the Russian government. Where's the outrage? Where's the investigation? #Tucker

The White House went on offense Wednesday amid the firestorm over Donald Trump Jr.’s campaign-season meeting with a Russian lawyer, trying to turn the tables by alleging the Democratic National Committee and the Clintons are the ones caught up in “collusion."

The White House has been grappling all week with revelations of a meeting the president’s eldest son held last year with Russian attorney Natalia Veselnitskaya, who was said to have dirt on Hillary Clinton as part of a Russian government effort to help the Trump campaign.

“If we’re looking at Russia relationships with anybody, it would be directly with the Clintons,” she said, citing examples of a speech former President Bill Clinton gave in Russia for which he reportedly earned over $500,000 and reports of then-Secretary of State Hillary Clinton selling what Sanders described as “a third of the world’s uranium” to Russia.

Putting more distance between himself and Russia, even on the heels of a meeting with Vladimir Putin, President Trump also said in an interview with the Christian Broadcasting Network set to air Thursday that he believes there are “many reasons” Putin would prefer Hillary Clinton in office over him.

“We are the most powerful country in the world and we are getting more and more powerful because I’m a big military person. As an example, if Hillary had won, our military would be decimated. Our energy would be much more expensive. That’s what Putin doesn’t like about me. And that’s why I say why would he want me?” Trump said.

Meanwhile, Sanders drew attention Wednesday to other alleged examples of Democratic coordination with a foreign government.

“If there’s been any evidence of collusion in 2016 actually happening, it would have been between the DNC and the Ukrainian government,” Sanders said.

Sanders was referring to a Politico report published in January. The report cited a meeting between Ukrainian government officials who allegedly tried to help Clinton undermine Trump by publicly questioning his fitness for office and shared research and damaging information on Trump and his advisers with Clinton allies.

The Politico investigation exposed that a Ukrainian-American DNC operative –Alexandra Chalupa, who worked in the Clinton White House—met with officials in the Ukrainian Embassy in Washington in an effort to expose ties between Trump’s then-top campaign official Paul Manafort and Russia. Manafort later resigned.

In Wednesday’s briefing, Sanders was effectively picking up where Trump left off on Twitter.

On Wednesday morning, Trump took to Twitter to rip Clinton over what he described as a double standard for their respective associates’ alleged cooperation with foreign governments in the 2016 campaign.

Trump first drew attention to a Washington Times article claiming Democrats had used false information from Russia to attack him and his campaign.

He added, “Why aren’t the same standards placed on the Democrats. Look what Hillary Clinton may have gotten away with. Disgraceful!”

The news report refers back to the questionable dossier—written by former British intelligence agent Christopher Steele and allegedly distributed by Fusion GPS—which contained unverified allegations against the Trump team. Fusion GPS, the Democrat-funded opposition research firm, allegedly paid Steele with money from a Clinton backer. The dossier eventually fell into the hands of the FBI.

As Sanders referenced such reports at Wednesday’s briefing, she said: “This is the only collusion I’ve seen, and it’s certainly been proven.”

Even as the White House sought to shift the focus to Democrats, the Trump team is facing mounting bipartisan scrutiny over both the Trump Jr. meeting and the administration’s handling of the latest revelations.

Sanders told reporters on Wednesday that she was “not aware of” any additional meetings with Trump officials and Russian nationals.

“Our goal is to be as transparent as humanly possible and put every bit of information at the forefront,” Sanders said. “We are willing to cooperate with anybody looking into this matter.”

Sanders was asked to respond to criticism from House Oversight Committee Chairman Rep. Trey Gowdy, R-S.C., who told Fox News Tuesday night that the “drip, drip, drip is undermining the credibility of this administration.”

“I think it’s actually undermining the credibility of the media because they drip, drip, drip, without having much to do about anything,” Sanders said.

“The White House created a four day drip, drip, drip, drop instead of getting it all out of the way on the first day,” Fleischer told Fox News, but said the White House should “make the case” questioning where the coverage was of the Ukrainian meeting between officials and an ex-Clinton staffer. “Donald Trump Jr.’s meeting was bad judgment. This is not excusing what he did—but it’s disproportionate. It’s part of why Donald Trump feels the press is unfair to him, and with some justification.”