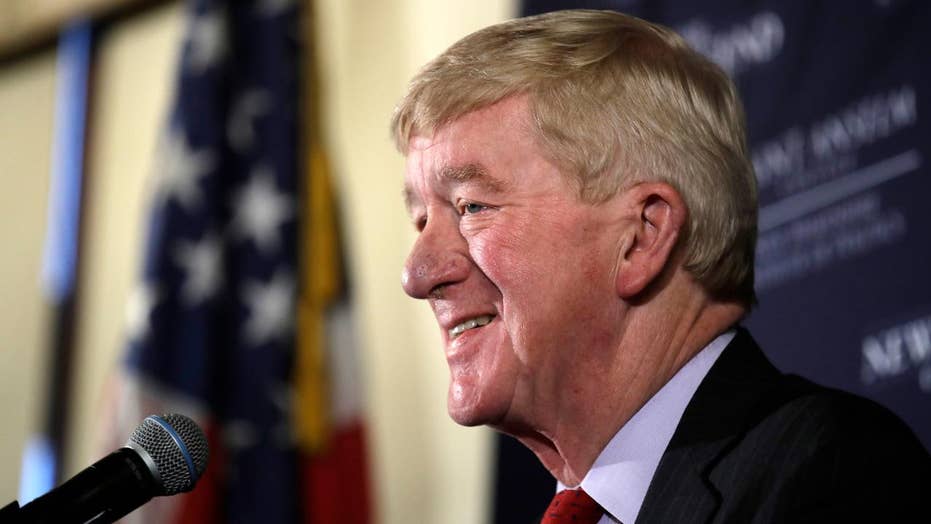 Bill Weld: I'm in second place in the Republican primary

As the Democratic White House hopefuls kick off their first round of presidential primary debates, the sole Republican who’s launched a long-shot primary challenge against GOP President Trump remains optimistic he may eventually face Trump on the debate stage.

“I should be in debates with Mr. Trump and I figure either I get a debate or I get an empty chair for me to talk to with 80 million people watching. Either one of those is good,” former Massachusetts Gov. Bill Weld said in an interview.

“I assure you next year, in a two-man race, I’m going to be well over 15 percent, so by the book I should be in debates with Mr. Trump,” Weld argued.

The 15 percent Weld was referring to was one of the thresholds set by the Commission on Presidential Debates for candidates to qualify for the general election debates in the 2016 cycle. Weld, who at the time was the Libertarian Party’s vice presidential nominee, and his running mate former GOP Gov. Gary Johnson of New Mexico failed to reach 15 percent in four qualifying polls and didn’t make the debate stage.

The Republican National Committee told Fox News that it doesn’t have any rule that would allow Weld to debate the incumbent president in the primaries if he reached 15 percent in the polls.

Weld was interviewed Tuesday, as he campaigned in the first-in-the-nation primary state of New Hampshire. The former governor’s been a near-weekly visitor to New Hampshire since launching an exploratory committee in February. Weld formally launched his GOP primary challenge against Trump in April.

Weld, who’s the only high-profile challenger to Trump at this point, is facing an extreme uphill climb. Just 12 percent of likely GOP primary voters in New Hampshire questioned in a Monmouth University poll conducted last month said they would consider supporting Weld, with 72 percent saying they’d firmly back the president in the primary.

The RNC has emphasized that it “and the Republican Party are firmly behind the president. Any effort to challenge the president's nomination is bound to go absolutely nowhere.”

And Trump re-election campaign spokeswoman Kayleigh McEnany discounted the likelihood that Weld would reach the debate stage against the president.

“We’re focused on the Democrats,” she said in April.

Weld acknowledges the heavy lift he faces in landing a debate with Trump.

“He’s going to hang tight and not give any ground whatsoever, so I think my gambit has to be to challenge Alec Baldwin to a debate and he can come out with his red Trump wig and we’ll see who wins that,” the former governor said, repeating a line he used earlier this month when discussing debates.