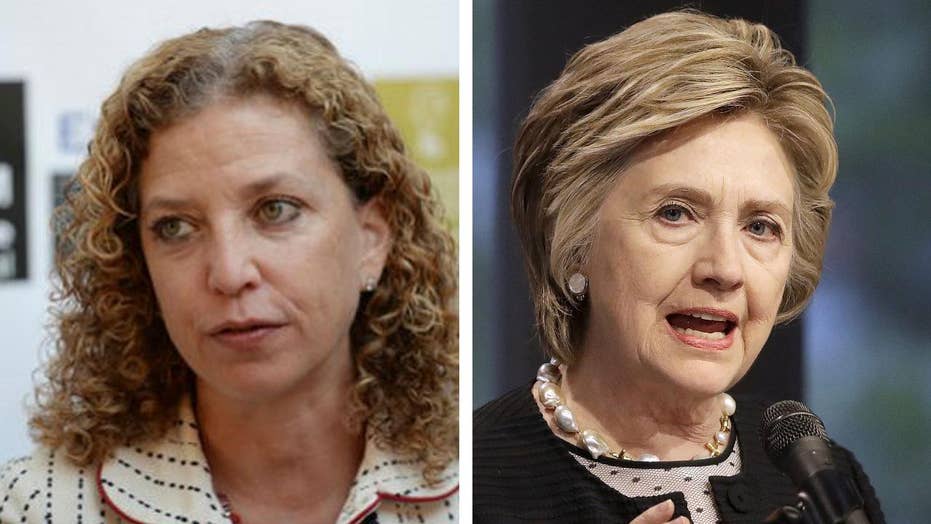 What if former Clinton campaign manager John Podesta, former DNC chair Debbie Wasserman Schultz and other leaders are lying about their knowledge of Fusion GPS and the DNC and Clinton campaigns funding the Trump dossier? #Tucker

The confusion surrounding who pulled the strings on the Democrat-funded research resulting in the controversial Trump dossier has only emboldened Republicans looking to cut through the fog, amid signs the connections between the project and its overseers were murky by design.

The head of the Democratic Party suggested as much during a forum at the University of Chicago earlier this week.

While defending the Fusion GPS dossier as standard opposition research, Democratic National Committee Chairman Tom Perez maintained he only learned about the dossier “a few days ago” – before explaining how his predecessors at the DNC could have set up such a project.

“You hire a lawyer – and we hire lawyers all the time who hire third-party vendors to do their work – and so we knew that we were paying for opposition research at the DNC, but we didn’t ask questions about who they’re hiring in the context of doing their research,” Perez told The Washington Post’s Karen Tumulty, when asked to explained how he could have been in the dark.

Perez, who was not at the DNC at the time, went on to defend the party’s efforts, saying “we had very strong reason to believe that Donald Trump and the Donald Trump campaign and the Russians were potentially conspiring to affect the election.”

DNC Chairman Tom Perez was not in charge when the Trump dossier was commissioned, but is defending it as standard opposition research. (AP)

The controversial dossier contained unverified and lurid allegations about dirt the Russians had on then-candidate Donald Trump and his campaign’s possible connections to Moscow.

The Washington Post reported this earlier week — and Fox News confirmed — that the political consulting firm Fusion GPS was retained last year by Marc E. Elias, an attorney representing the DNC and the Clinton campaign. The firm then hired former British intelligence officer Christopher Steele to write the now-infamous dossier.

According to the report, the Clinton campaign and DNC paid more than $9 million to Elias’ firm Perkins Coie that, in turn, retained the political consultants who commissioned the research. Before that, the research was backed by an unknown Republican client.

But it’s unclear how much of that $9 million went toward the dossier. And it’s unclear who exactly at the Clinton campaign and DNC might have known how it was being spent.

Perez and then-DNC leader Debbie Wasserman Schultz have denied knowledge. So have Hillary Clinton's former campaign chairman John Podesta and spokesman Brian Fallon. And while Clinton herself has not spoken publicly on the matter, sources have sought to distance her from the dossier in news reports.

Rep. Darrell Issa, R-Calif., told Fox News’ “Outnumbered Overtime” that the careful distance between the research and the political entities that helped fund it only underscores the need to “connect the dots.”

“There were so many in-between groups used to sort of shield direct control that it’s very clear that people on the one end, Russia, and on the other end, the Democratic National Committee and Hillary Clinton’s campaign – they obviously wanted to create the inability to connect the dots. And when somebody goes through so many efforts through so many surrogates to keep that from happening, you have a special reason to want to connect the dots,” he said Thursday.

To what extent Russia might have been involved is unclear.

But more details could emerge soon, as Fusion GPS fights in court to keep its bank records on lockdown.

Wall Street Journal editorial board member Kimberley Strassel wrote that the disclosure of the DNC-Clinton connection suggests “there's something Fusion cares about keeping secret even more” in those records.

“If the House wins, don't be surprised if those records include money connected to Russians. In the past Fusion has worked with Russians, including lawyer Natalia Veselnitskaya, who happened to show up last year in Donald Trump Jr.'s office,” Strassel wrote.

President Trump has reveled in the recent revelations – including renewed scrutiny of a 2010 Obama-era uranium deal involving a Russian firm – using them to fuel his claims that the investigations into Russian collusion with his campaign are baseless.

“It is now commonly agreed, after many months of COSTLY looking, that there was NO collusion between Russia and Trump. Was collusion with HC!” Trump tweeted Friday.

Republican National Committee Chairwoman Ronna McDaniel said on “Fox & Friends” that she doesn’t know which GOP candidate started backing Fusion but said Steele only got involved after the Democrats stepped in.

“Democrats have not been transparent or honest about how this started,” she said Friday.

In another twist, CNN reported that former Clinton campaign chairman Podesta privately denied any knowledge of the payment arrangement in recent interviews with congressional investigators. According to the report, sitting next to Podesta during that September interview was his attorney Marc Elias – who retained Fusion.