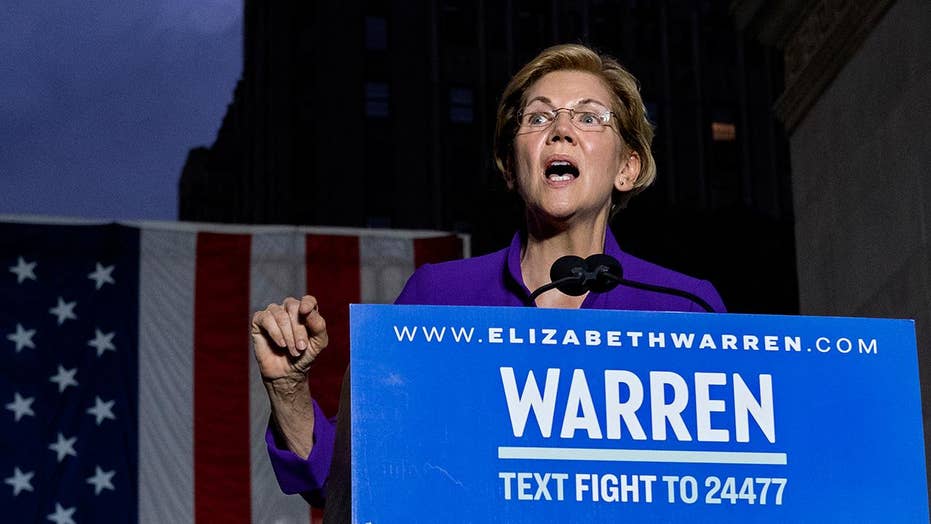 WARREN LOOKS TO GENDER POLITICS FOR AN EDGE
WaPo: “Sen. Elizabeth Warren hailed the political power of female-led organizing in a speech Monday night that invoked the deadly 1911 Triangle Shirtwaist Factory fire to argue that outrage can spark positive change — and to make the case for her own presidential ambitions. Warren has long faced doubts from some Democratic leaders and voters who wonder if she would be able to defeat President Trump, because of her outspoken liberal message and voters’ possible reluctance to embrace a woman as president. Monday’s speech, and the big crowd it attracted, was in part an attempt to rebut such doubts by arguing that liberal women have won big change before. …  ‘In fact, we’re not here because of men at all — we’re here because of some hard-working women.’ The comments were a more direct nod to gender than most of her public remarks to date, which typically focus on the ways in which powerful interests have tilted the country’s government toward elites.”

Swing-district Dems fret over Warren, Sanders - McClatchy: “When the top Democratic presidential candidates gathered in Houston last week, they debated a radical health care overhaul and mandatory gun confiscation while striking an uncompromising tone toward President Donald Trump and the Republican Party. About 15 miles away, the message from a lesser-known but still-important Democrat was decidedly different. ‘I see that over and over again, where people treat folks on the other side of the aisle not like Tip O’Neill and Ronald Reagan, where they could sit down and talk about things, but as you’re an enemy of my country and an enemy of me,’ Sri Preston Kulkarni… [Kulkarni] is pushing for the need for compromise while running in Texas’ 22nd district, which is expected to be among the top House battlegrounds in 2020. …  It’s a disconnect some Democratic operatives worry will harm the party’s chances as they seek to maintain their House majority and take control of the Senate.”

TRUMP VOWS TO FLIP NEW MEXICO
Albuquerque Journal: “In his first visit to New Mexico since winning the White House, President Donald Trump Monday night pledged to ‘campaign for every vote’ and defy political pundits by adding the state to his win column in 2020. During a rally at the Santa Ana Star Center attended by an estimated 9,000 people, Trump touted an oil drilling boom in southeast New Mexico that has driven state revenue levels to an all-time high and cited a spike in business applications statewide before asking the crowd to ‘give me a little bit more time.’ ‘The Democrats want to completely annihilate New Mexico’s economy,’ he said. ‘But … New Mexico will never give them the chance.’ Last year, Democrats swept all statewide offices on the ballot in New Mexico and the state currently has all-Democratic congressional delegation."

Trump woos deep-pocketed California donors in secret - San Jose Mercury News: “Less than 24 hours before President Trump is arriving in the Bay Area for his first visit to the region as president, not even the Republican donors who’ve paid thousands of dollars to dine with him know where his fundraiser is going to be held. Attendees who RSVP’d for the luncheon — where tickets are going for up to $100,000 — were told to arrive at a Palo Alto drop-off point Tuesday morning before being transported to the secret fundraiser location, according to an email forwarded to the Bay Area News Group by an attendee. It’s a level of secrecy that seems designed in part to thwart anti-Trump protesters from the heavily Democratic area who are hoping to send the president a message.”

THE RULEBOOK: MARK IT DOWN
“If we resort for a criterion to the different principles on which different forms of government are established, we may define a republic to be, or at least may bestow that name on, a government which derives all its powers directly or indirectly from the great body of the people, and is administered by persons holding their offices during pleasure, for a limited period, or during good behavior.” – James Madison, Federalist No. 39

TIME OUT: COKIE ROBERTS, R.I.P.
NPR: “Veteran journalist Cokie Roberts, who joined an upstart NPR in 1978 and left an indelible imprint on the growing network with her coverage of Washington politics before later going to ABC News, has died. She was 75. Roberts died Tuesday due to complications from breast cancer, according to a family statement. A bestselling author and Emmy Award winner, Roberts was one of NPR's most recognizable voices and is considered one of a handful of pioneering female journalists — along with Nina Totenberg, Linda Wertheimer and Susan Stamberg — who helped shape the public broadcaster's sound and culture at a time when few women held prominent roles in journalism. … Roberts won numerous awards during her long career in journalism, including three Emmys and the Edward R. Murrow award. She was inducted into the Broadcasting and Cable Hall of Fame. She was recognized by the American Women in Radio and Television as one of the 50 greatest women in the history of broadcasting.”

IMPEACHMENT PROBE HEARINGS UNDERWAY
AP: “As they investigate President Donald Trump, Democrats on the House Judiciary Committee will hold their first official hearing in what they are calling an impeachment investigation. Corey Lewandowski, Trump’s outspoken former campaign manager, is scheduled to appear Tuesday to discuss the report by former special counsel Robert Mueller. But it’s unlikely that Democrats will get much new information. A devoted friend and supporter of the Republican president, Lewandowski isn’t expected to elaborate much beyond what he told Mueller’s investigators last year. Mueller himself testified this summer, with no bombshells. Two other witnesses who were subpoenaed alongside Lewandowski — former White House aides Rick Dearborn and Rob Porter — won’t show up at all, on orders from the White House.”

Local prosecutors may break Trump’s tax return blockade - NYT: “State prosecutors in Manhattan have subpoenaed President Trump’s accounting firm to demand eight years of his personal and corporate tax returns, according to several people with knowledge of the matter. The subpoena opens a new front in a wide-ranging effort to obtain copies of the president’s tax returns, which Mr. Trump initially said he would make public during the 2016 campaign but has since refused to disclose. The subpoena was issued by the Manhattan district attorney’s office late last month, soon after it opened a criminal investigation into the role that the president and his family business played in hush-money payments made in the run-up to the election.”

DEM LEADERS TRY TO NIX KAVANAUGH IMPEACHMENT PUSH
Politico: “Senior Democrats are moving quickly to snuff out calls to impeach Brett Kavanaugh, arguing those tactics are unrealistic and politically harmful. Democrats are already wrestling with whether to try to oust President Donald Trump, and leadership sees little room for the party to take on a second divisive impeachment saga barely a year before the presidential election. So the demands by 2020 presidential contenders to remove the Supreme Court justice, on the heels of new reporting about allegations of sexual misconduct, are getting panned. ‘Get real,’ as Senate Minority Whip Dick Durbin (D-Ill.) put it Monday afternoon. ‘We’ve got to get beyond this ‘impeachment is the answer to every problem.’ It’s not realistic,’ Durbin said. … Rep. Ayanna Pressley (D-Mass.) said she will file an impeachment resolution on Tuesday… The two-page resolution calls on the House Judiciary Committee to investigate whether Kavanaugh should be impeached, according to a draft obtained by POLITICO.”

Ocasio-Cortez backs first 2020 challenger to an incumbent - NYT: “Representative Alexandria Ocasio-Cortez plans on Tuesday to announce her endorsement of Marie Newman, a progressive candidate seeking to oust Representative Daniel Lipinski, a conservative-leaning Illinois Democrat, marking her first move of the 2020 campaign cycle to back a primary challenger to an incumbent. Ms. Ocasio-Cortez’s high-profile support amounts to a powerful seal of approval, telegraphed to her legions of ardent liberal fans, on behalf of Ms. Newman, and a reflection of the zeal of the party’s progressive left to leverage its nascent power to continue targeting sitting Democrats. Ms. Newman is backed by Justice Democrats, the group that propelled Ms. Ocasio-Cortez’s insurgent campaign and upset victory last year over a veteran Democratic congressman who she argued was out of step with his constituents.”

GOPERS SHARPEN ATTACKS IN LOUISIANA GOVERNOR RACE
AP: “Louisiana gubernatorial candidate Eddie Rispone is launching a TV attack ad against his fellow GOP contender, U.S. Rep. Ralph Abraham, ending Republican Party leaders’ efforts to keep their two main candidates from a slugfest ahead of the Oct. 12 election. Rispone’s 30-second spot, which his campaign said will start airing Tuesday, pans Abraham for reneging on a promise to donate his congressional salary to charity and for missing congressional votes. It says he voted with Democratic House Speaker Nancy Pelosi hundreds of times. The ad also hits Abraham, a third-term congressman from northeast Louisiana, for a 2016 statement suggesting Donald Trump should consider stepping aside from the GOP presidential nomination after a recording emerged in which Trump boasted about groping women. … Rispone campaign spokesman Anthony Ramirez said the ad is being paired with a second spot that criticizes Democratic incumbent John Bel Edwards. … Abraham’s campaign didn’t immediately comment about the TV attack.”

AUDIBLE: GO TELL ‘EM IN TUSCALOOSA
“At the end of the day, the people of Alabama, they trust football coaches a heck of a lot more than they trust politicians.” – Republican candidate for Senate Tommy Tuberville, a former Auburn head coach, said on Fox Business Network.

NEGATIVE CAMPAIGNING HAS GOTTEN OUT OF HAND
WBBM: “Talk about dumb luck during a Morning Insiders interview – near a very busy Chicago Transit Authority stop nicknamed the ‘pigeon poop station.’ … CBS 2’s Lauren Victory was talking with a lawmaker who was fighting to fix the problem, and he fell victim to it right when the cameras were rolling. That’s right, a pigeon relieved itself on state Rep. Jaime Andrade (D-Chicago) right on cue as he spoke. Andrade had just been badmouthing the pigeons. ‘I’ll just have to go clean up,’ he said. ‘That’s what happens to my constituents. They get s**t on all [the] time.’ Birds are a chronic problem around the Irving Park Blue Line station. Their waste and feathers constantly coat the path commuters take – including suburbanites and tourists who use the nearby Metra stop. … Andrade said he is going back to the drawing board. But first, he needs to hit the shower after being pooped on.”