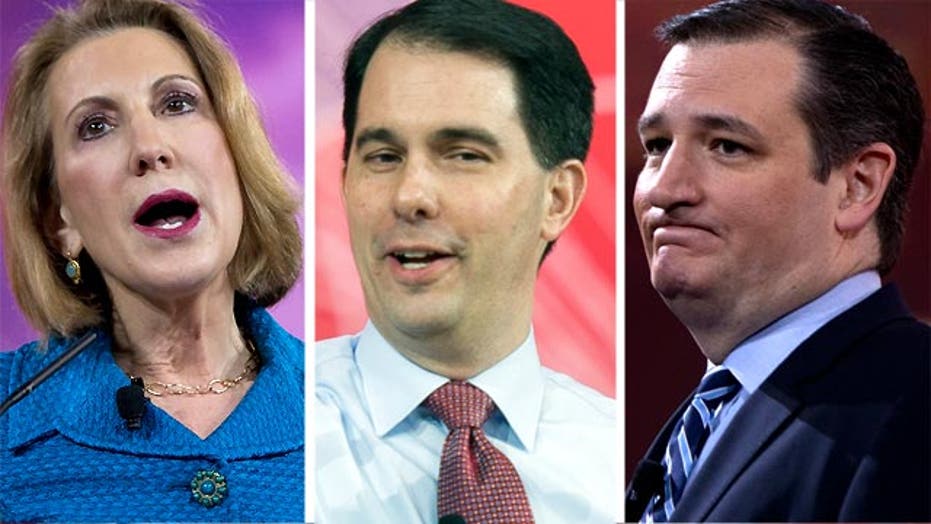 OXON HILL, Md. – Wisconsin GOP Gov. Scott Walker rolled up his sleeves Thursday and picked up where he left off last month in Iowa -- trying to win over his party’s conservative base on the way to a potential 2016 White House run.

Walker made his impassioned case this time at the Conservative Political Action Conference, the annual gathering of many of the country’s most conservative voters, telling them “if we can do it in Wisconsin, there’s no doubt we can do it across America.”

As he did in January at the Iowa Freedom Summit, Walker relied again on his four-year record as governor -- touting a drop in unemployment, lower taxes and improved student test scores since ending union-backed teacher tenure.

“Because of reform, our state is a better than the one that (I) grew up in,” he said in a roughly 13-minute speech that drew several standing ovations.

Walker at one point raised eyebrows, after being asked about how he'd respond to threats like ISIS.

"If I can take on 100,000 protesters, I can do the same across the world," he said, while also discussing more severe security threats he's confronted in the Midwest.

Walker spokeswoman Kirsten Kukowski later clarified that the governor was "in no way comparing any American citizen to ISIS." She said: "What the governor was saying was when faced with adversity he chooses strength and leadership. Those are the qualities we need to fix the leadership void this White House has created."

Walker arrived at the three-day event in suburban Maryland, just outside of Washington, riding a wave of popularity that ignited in Iowa and that has put him near or atop most polls, with Election Day roughly 21 months away and all of the major candidates yet to officially declare a candidacy.

He will compete this weekend for the conservative vote with essentially every other major potential GOP candidate -- all scheduled to give a speech and participate in a question-and-answer session at the event.

He pointedly criticized Obama for declaring U.S. diplomatic efforts in Yemen, still a haven for terror networks, “a success,” and the Islamic State a “JV” team.

“We need a leader who stands up and says radical Islamic terrorism is a threat to the whole world,” he said. “We need to take the fight to them, not wait until they show up on American soil.”

Meanwhile, Cruz called the president a “lawless leader” in his own blistering broadside, the kind of red meat conservatism that's made him a Tea Party stalwart and top-tier potential presidential candidate.

Cruz said he bears the "battle scars" of the conservative fight and urged the audience to beware of candidates who just talk and don’t act.

"You have to stand and fight," Cruz said to an overflow auditorium and loud applause. "Actions speak louder than words."

"When candidates say they oppose Common Core, fantastic," he continued. "But when have you stood up and fought against it?"

As for Obama, Cruz railed against the president's policies.

"Repeal every bit of ObamaCare," said Cruz, who angered some in the Republican establishment in 2013 over his efforts to target the health law, which fueled the partial government shutdown.

Perhaps gearing up for the 2016 battle, he also called Hillary Rodham Clinton, the presumptive Democratic frontrunner in the race, "the embodiment of the corruption of Washington."

Christie, amid some skepticism over his standing among national Republican voters, sought Thursday to convince the party faithful he has the bona fides -- and temperament -- to be presidential material in 2016.

He touted his pro-life stance, arguing that he was elected in 2009 on a pro-life platform and that he vetoed Planned Parenthood funding from the state budget five times. And he dismissed speculation that his drop in early polls and the fundraising potential of now-presumptive GOP front-runner Jeb Bush is too much to overcome to win the 2016 nomination.

"I'm not worried about what the polls say 21 months out," Christie said. "I will run a hard campaign. ... I like my chances."

Carson, a neurosurgeon who has emerged as a widely popular conservative voice, earlier kicked off the conference with a call to "change course."

"We need to move in a very different direction," said Carson, considered a likely 2016 candidate.

Carson, who is black, on Thursday accused liberals of "making people dependent" on an American welfare system.

"We need to reach out to people who think that maybe being dependent is reasonable as long as they feel safe. And it isn't," he said. "The great societies of the sixties figured that if we just threw money at the problem we could fix it. ... Everything these programs tried to fix have gotten worse."

The conference, considered the first big test of which candidates can connect to the party’s conservative base on a national stage, ends on Saturday with the straw poll.