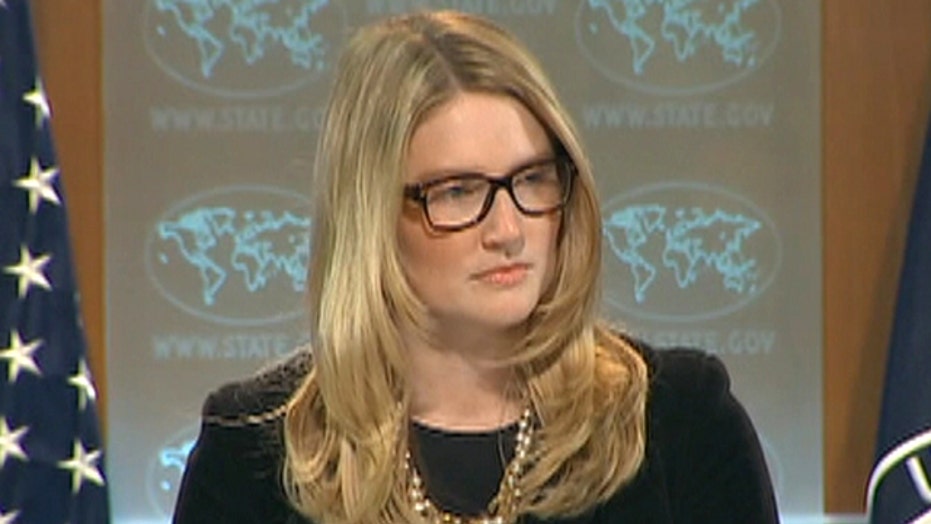 The State Department made clear Wednesday that the Obama administration plans to bypass the United Nations Security Council as it prepares for a possible strike on Syria, after having failed to win support from Russia.

In blunt terms, department spokeswoman Marie Harf said last-ditch efforts to win support for an anti-Assad resolution at the U.N. were unsuccessful, and the U.S. would proceed anyway.

"We see no avenue forward given continued Russian opposition to any meaningful council action on Syria," she said. "Therefore, the United States will continue its consultations and will take appropriate actions to respond in the days ahead."

Earlier in the day, the U.S. and its allies tried to advance a resolution from Great Britain condemning the alleged chemical attack last week in Syria, and authorizing "necessary measures to protect civilians." The Russian delegation, traditional supporters of the Assad government, immediately complained about the resolution during the discussions at U.N. headquarters in New York.

Harf said the U.N. Security Council would not be proceeding with a vote.

Launching a military strike without U.N. authorization would not be without precedent -- the U.S. acted unilaterally during the 1983 invasion of Grenada, the 1989 invasion of Panama, and missile strikes on Sudan and Afghanistan in 1998.

But in this case, the U.N.'s special envoy to Syria, Lakhdar Brahimi, is urging the U.S. to seek and obtain Security Council approval.

Harf and other U.S. officials have argued that the U.S. is obligated to respond, given the Assad regime's alleged breach of international standards on chemical weapons, in a grisly attack that reportedly killed hundreds. The images from that attack, coupled with other evidence, led Secretary of State John Kerry to declare earlier this week that the use of the weapons was "undeniable."

"It's clear Syria violated international law here," Harf said. She rejected the suggestion that the U.S. was bypassing the international community, noting that top U.S. officials have been consulting all week with leaders of other nations about the situation in Syria.

By the end of the week, the U.S. intelligence community is expected to release evidence making the case that the Assad regime used chemical weapons. British Prime Minister David Cameron is seeking a vote in Parliament on Thursday in support of responding in Syria.

Additionally, the Obama administration announced Wednesday it will meet with key House and Senate members and top Congressional leaders Thursday to brief them on intelligence and plans for possible strikes against Syria.

Some members of Congress have demanded Obama seek their approval as well -- or at least greater consultation -- before proceeding.

Sources tell Fox News lawmakers are expressing significant concern about efforts by the administration to act in Syria, and are worried about the possible outcome of a bombing attack.

Lawmakers want to know what the endgame is with Syria, why the U.S. is acting now and what it is expecting as an outcome.

House Speaker Boehner sent a letter to Obama Wednesday asking him to personally explain to the nation and Congress how U.S. military action against Syria will secure American national security.

"It is essential you address on what basis any use of force would be legally justified and how the justification comports with the exclusive authority of Congressional authorization under Article I of the Constitution," Boehner writes.

Additionally, Rep. Tom McClintock, R-Calif., issued a blistering statement about the possibility that Obama would proceed with a strike without congressional authorization.

"The President's authority as Commander-in-Chief to order a military attack on a foreign government is implicitly limited by the Constitution to repelling an attack," he said.

Further, he noted that the 1973 War Powers Resolution, which has been repeatedly ignored by U.S. presidents, dictates that the president cannot send forces into hostilities for a non-retaliatory strike without a declaration of war or approval from Congress.