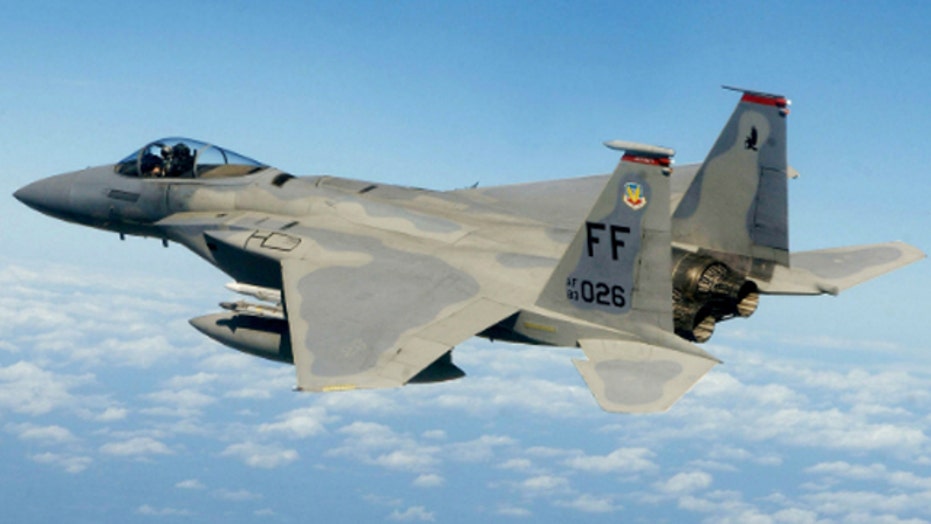 Discontent among US pilots carrying out air war against ISIS

Claim excessive rules of engagement hindering them from striking targets

U.S. military pilots carrying out the air war against the Islamic State in Iraq and Syria are voicing growing discontent over what they say are heavy-handed rules of engagement hindering them from striking targets.

They blame a bureaucracy that does not allow for quick decision-making. One Navy F-18 pilot who has flown missions against ISIS voiced his frustration to Fox News, saying: "There were times I had groups of ISIS fighters in my sights, but couldn't get clearance to engage.”

He added, “They probably killed innocent people and spread evil because of my inability to kill them. It was frustrating."

Sources close to the air war against ISIS told Fox News that strike missions take, on average, just under an hour, from a pilot requesting permission to strike an ISIS target to a weapon leaving the wing.

A spokesman for the U.S. Air Force’s Central Command pushed back: “We refute the idea that close air support strikes take 'an hour on average'. Depending on the how complex the target environment is, a strike could take place in less than 10 minutes or it could take much longer.

"As our leaders have said, this is a long-term fight, and we will not alienate civilians, the Iraqi government or our coalition partners by striking targets indiscriminately."

A former U.S. Air Force general who led air campaigns over Iraq and Afghanistan also said today's pilots are being "micromanaged," and the process for ordering strikes is slow -- squandering valuable minutes and making it possible for the enemy to escape.

“You're talking about hours in some cases, which by that time the particular tactical target left the area and or the aircraft has run out of fuel. These are excessive procedures that are handing our adversary an advantage,” said retired Lt. Gen. David Deptula, a former director of the Combined Air Operations Center in Afghanistan in 2001.

The U.S.-led airstrikes over Iraq during the first Gulf War averaged 953 strike sorties per day, according to the Air Force -- which said "only about 5 percent of the ... weapons released in those strikes were precision guided," meaning targets likely "required multiple strikes to meet the desired level of destruction."

According to the U.S.-led coalition to defeat ISIS, U.S. military aircraft carry out 80 percent of the strikes against ISIS and average 14 per day.

Deptula blames the White House for the bottleneck.

“The ultimate guidance rests in 1600 Pennsylvania Avenue,” he said. “We have been applying air power like a rain shower or a drizzle -- for it to be effective, it needs to be applied like a thunderstorm.”

Sen. John McCain, R-Ariz., recently complained that 75 percent of pilots are returning without dropping any ordnance, due to delays in decision-making up the chain of command.

A senior defense official at the Pentagon pushed back on the comparisons between the air war against ISIS and past air campaigns.

“The Gulf War and Kosovo are not reasonable comparisons. In those instances, we were fighting conventional forces. Today, we are supporting a fight against terrorists who blend into the civilian population,” he said. “Our threshold for civilian casualties and collateral damage is low. We don’t want to own this fight. We have reliable partners on the ground.”

McCain, speaking on CBS’ “Face the Nation” on Sunday, also called for “forward air controllers,” as well as special forces and “more of those kind of raids that were so successful into Syria.”

Another former U.S. Air Force general agreed. “We need to get somebody to find the targets and [U.S.] airpower will blow them up ... period,” said retired Gen. Charles F. Wald, former deputy commander of United States European Command

In a letter to Secretary of Defense Ash Carter Wednesday, Rep. Duncan Hunter asked the secretary to consider arming the Sunnis tribes in Anbar directly in order to defeat ISIS. Like McCain, Hunter also wants to “immediately embed special operators and ground-air controllers to support ground operations against IS[IS].”

But a defense official pushed back on Hunter’s plan to bypass Baghdad and arm the Sunni tribes directly,  telling Fox News,  “[the plan] doesn’t take into account the presence of Iran inside Iraq right now… there could be unintended consequences and restore a sectarian war.”