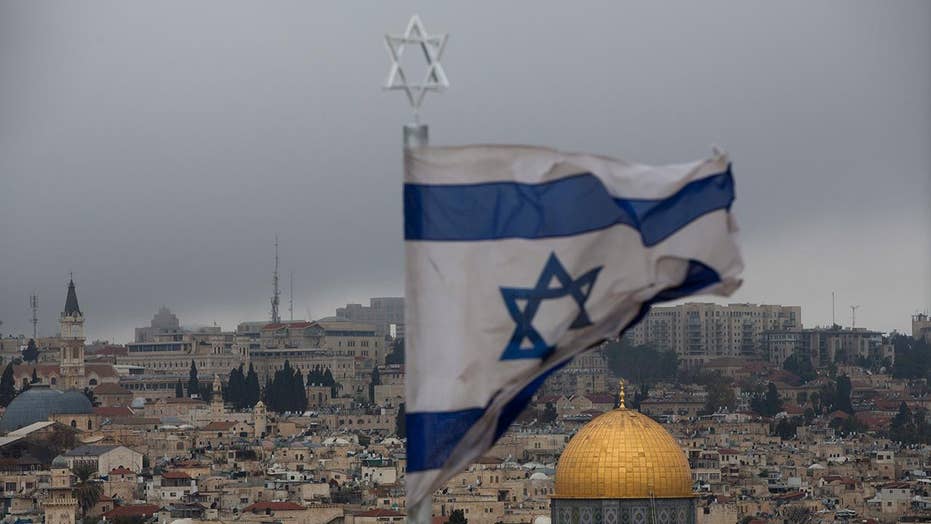 Trump begins process of moving US embassy to Jerusalem

The president insisted he is still firmly committed to helping find peace between Israel and the Palestinians; John Roberts has the roundup for 'Special Report.'

The U.S. Embassy in Jerusalem will open in May to coincide with the 70th anniversary of Israel declaring its independence, Trump administration officials said Friday.

“We are excited about taking this historic step, and look forward with anticipation to the May opening,” State Department spokeswoman Heather Nauert said in a statement on Friday.

Officials told Fox News the embassy would initially be located in the neighborhood of Arnona on a compound that currently houses the consular operations of the U.S. Consulate General Jerusalem. Initially, the embassy will consist of the Ambassador and a small team.

Nauert said that the Consulate General would "continue to operate as an independent mission with an unchanged mandate" from its Agron Road location.

An official also told Fox News that the hope is for the U.S. to develop only a “footprint” there in May, with a target of a fuller complement and facility by the end of 2019.

“By the end of next year, we intend to open a new Embassy Jerusalem annex on the Arnona compound that will provide the Ambassador and his team with expanded interim office space,” Nauert said, noting that the State Department has “started the search” for a permanent embassy site, and said that planning and construction would be a “longer-term undertaking.”

Administration officials said that Congress would be notified of the May move on Friday.

A ribbon-cutting for the new embassy is slated for mid-May. Israel’s anniversary of its independence is May 14, 1948.

President Trump formally recognized Jerusalem as Israel’s capital in December 2017 by directing the State Department to begin the move of the U.S. Embassy from Tel Aviv to Jerusalem.

“This is nothing more or less than a recognition of reality,” Trump said upon his announcement. “It is also the right thing to do. It is something that has to be done.”

The president stressed, however, that the decision was “not intended in any way to reflect a departure from our strong commitment to facilitate a lasting peace agreement” between Israel and Palestine.

Israeli Prime Minister Benjamin Netanyahu thanked Trump for the “courageous and just” decision, while Palestinian President Mahmood Abbas warned of the “gravity of consequences” for the “peace process and security and stability in the region and the world.”

The U.S. is the first country to move its embassy to Jerusalem – a territory that is claimed by both Israelis and Palestinians. Other countries with diplomatic relations with Israel maintain their embassies in Tel Aviv.

There are currently about 1,000 personnel in the embassy in Tel Aviv, and officials have said it will take time to address security, design and cost concern.

The decision to move the embassy has been controversial, dating back decades. A law passed in 1995 under the Clinton administration considers Jerusalem the capital, and even mandates the move of the embassy there.

DEMS BLAST TRUMP FOR JERUSALEM DECISION, DESPITE PAST SUPPORT

But the law allows for a loophole, used by former Presidents Bill Clinton, George W. Bush, and Barack Obama: an option to issue waivers every six months to delay the move from Tel Aviv.

Trump also initially took advantage of that loophole, which Republicans have long called to be closed. His first waiver was signed in June 2017.

Administration officials said in December that Trump would sign a waiver that would prevent jeopardizing State Department funding while the relocation process began.

The May opening of the new embassy is ahead of schedule, as Vice President Pence said that it would open by the end of 2019, and Tillerson initially suggested it could take years.

The first “footprint” of the embassy will consist of just a few offices inside an existing U.S. facility in Jerusalem.