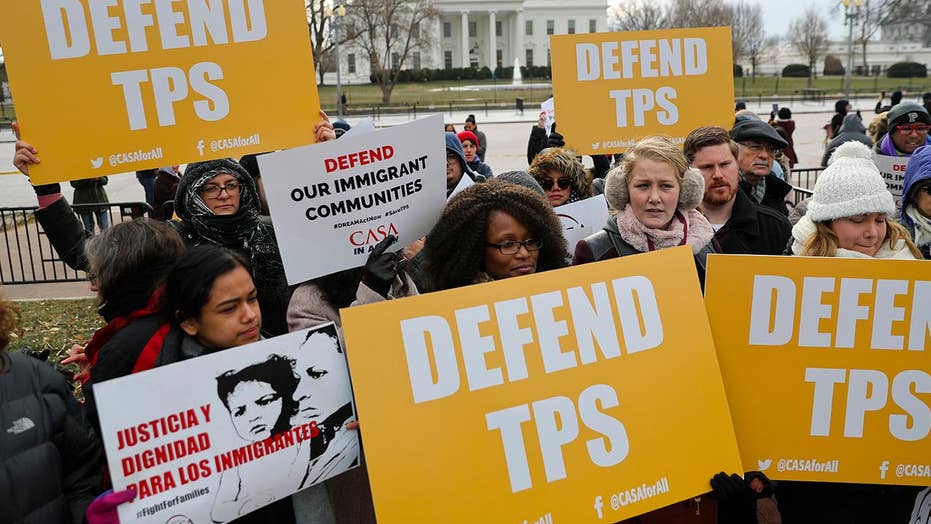 Trump pulls the plug on immigrants from El Salvador

Signs are emerging that the Trump administration’s decision to end special status for Salvadoran immigrants could be used as a bargaining chip for the president as he works to strike a deal with Congress on immigration.

Kicking off those talks, President Trump met Tuesday with a bipartisan gathering of congressional lawmakers at the White House.

“I hope we’re going to come up with an answer for DACA,” Trump told the group, which included Illinois Democratic Sen. Dick Durbin and Arkansas Republican Sen. Tom Cotton.

Trump meeting with lawmakers to hash out immigration policy

John Roberts reports on the bipartisan group of senators heading to the White House.

Democrats' central demand is legislation to preserve the Obama-era DACA program, which was ended by Trump last year and shields illegal immigrants brought to the United States as children from deportation.

The president has long insisted that the deal includes funding for a wall along the border with Mexico, something Democrats have rejected.

But a new component materialized this week after the Trump administration announced Monday that as many as 200,000 Salvadoran immigrants living in the United States will no longer be allowed to stay because they have decided to end their protected status.

The move prompted a backlash from Democrats and immigrant advocates.

Demonstrators protest the Trump administration's decision to strip TPS for Salvadorans in the U.S. (AP)

The Washington Post, though, cited an aide on Capitol Hill familiar with the negotiations to say Democrats could insist on extending the status for these immigrants as part of a deal with the president on border security and cuts to legal immigration.

These Central Americans had been permitted to stay following a devastating earthquake in 2001, under Temporary Protected Status, or TPS.  The new move from the Trump administration could force those who had been protected under TPS to leave the U.S. by September 2019 or face deportation.

New Homeland Security Secretary Kirstjen Nielsen determined Monday that the "substantial disruption of living conditions caused by the earthquake no longer exist," according to the Department of Homeland Security.

Democrats reacted by accusing the administration of tearing “families apart.”

“The Trump administration’s announcement that they will tear families apart and no longer allow America to be a refuge for hundreds of thousands whose lives are at risk in El Salvador is not just shortsighted; it’s heartbreaking and it flies in the face of the values that built this great nation,” Illinois Democratic Sen. Tammy Duckworth said in a statement.

Trump hasn't publicly said whether he'd be willing to back off the TPS decision. But he has several items on his wish list.

While meeting with lawmakers Tuesday, the president said any bill on DACA needs to fund the border wall and security, end chain migration and cancel the visa lottery program.

“I really do believe Democrat and Republican, the people sitting in this room, really want to get something done,” Trump said.

Trump also hinted at a potential two-phase process, telling the lawmakers that he would eventually like to tackle a more comprehensive immigration reform bill after dealing with DACA and border security first.

“I think comprehensive will be phase two. … I think we get the one thing done and go into comprehensive the following day,” Trump said.

Trump told reporters that Virginia Rep. Bob Goodlatte, the chairman of the House Judiciary Committee, will be introducing a bill related to DACA and border security this week.

Speaking Tuesday on the Senate floor, Democratic Minority Leader Chuck Schumer said they are open to a deal on DACA but reiterated Democrats’ opposition to funding a wall.

“The problem thus far has been President Trump’s insistence on a completely ineffective and absurdly expensive border wall as a part of any deal on DACA,” Schumer said.

Fox News’ John Roberts and Serafin Gomez and The Associated Press contributed to this report.