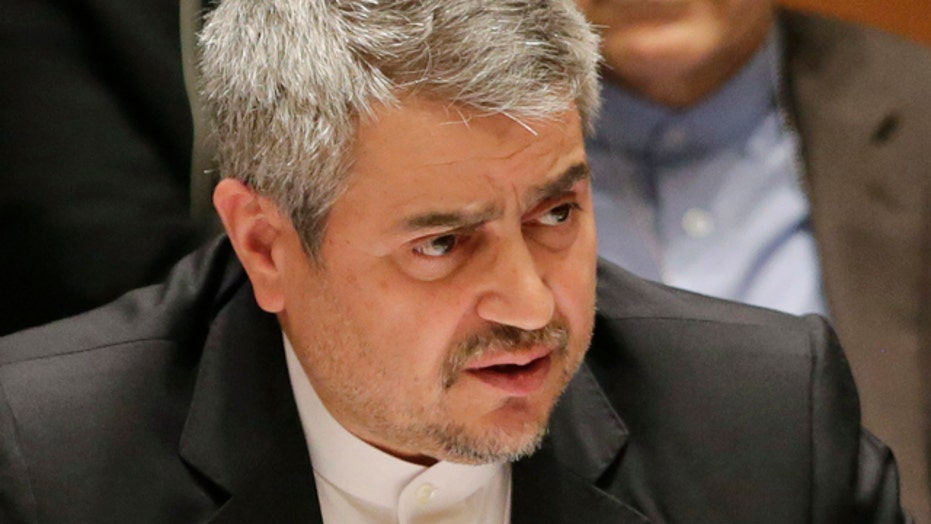 The U.N. Security Council on Monday unanimously endorsed the Iran nuclear deal, though the show of support was interrupted shortly afterward by a war of words between the American and Iranian ambassadors.

Iran's ambassador lashed out at the U.S. mere moments after the vote, in retaliation for U.S. Ambassador Samantha Power bringing up Tehran's human rights record.

Power, during the session, had raised concerns about Iran's support for terror proxies and reiterated a U.S. demand that Iran release all unjustly held American prisoners. Iran's ambassador fired back, blaming the U.S. for instability in the region and calling Power's criticism "ironic."

"The country that invaded two countries in our region and created favorable grounds for the growth of terrorism and extremism is not well placed to raise such accusations against my country," Iranian U.N. Ambassador Gholamali Khoshroo said, calling past U.S. actions in the region "feckless" and "reckless."

The exchange, which came as Israel's representative continued to assail the deal itself, hung over what was nevertheless the first formal step at the international body toward implementing the deal and rolling back U.N. sanctions.

The movement at the U.N. still faces resistance in Washington, where lawmakers had wanted the Security Council to wait until Congress formally reviews the landmark agreement. The White House says the Security Council's actions won't take effect for another 90 days, but congressional lawmakers had urged President Obama to halt Monday's vote -- and allow Congress to vote first.

Sen. John Barrasso, R-Wyo., on Monday called it an "end-run around Congress."

Cardin and Barrasso were joined by several top-ranking lawmakers on both sides of the aisle in urging a pause at the U.N.

Congress has 60 days to review the deal -- and then vote for or against it, or take no action. "I think they should have gone to the United Nations after the 60-day review," Cardin said. "They don't gain anything by doing it earlier."

But the Obama administration argued that they were still showing deference to Congress, and that the U.N. shouldn't be hamstrung during that review period.

"They have a right to [vote on the deal], honestly. It's presumptuous of some people to suspect that France, Russia, China, Germany, Britain ought to do what the Congress tells them to do," Secretary of State John Kerry told ABC's "This Week." "They have a right to have a vote.  But we prevailed on them to delay the implementation of that vote out of respect for our Congress so we wouldn't be jamming them."

The vote Monday authorizes a series of measures leading to the end of U.N. sanctions that have hurt Iran's economy. But the measure also provides a mechanism for U.N. sanctions to "snap back" in place if Iran fails to meet its obligations.

The resolution had been agreed to by the five veto-wielding council members, who along with Germany negotiated the nuclear deal with Iran. It was co-sponsored, and approved, by all 15 members of the Security Council.

The document specifies that seven resolutions related to U.N. sanctions will be terminated when Iran has completed a series of major steps to curb its nuclear program and the International Atomic Energy Agency has concluded that "all nuclear material in Iran remains in peaceful activities."

All provisions of the U.N. resolution will terminate in 10 years, including the snap back provision.

But last week the six major powers -- the U.S., Russia, China, Britain, France and Germany -- and the European Union sent a letter, seen by The Associated Press, informing U.N. Secretary-General Ban Ki-moon that they have agreed to extend the snap back mechanism for an additional five years. They asked Ban to send the letter to the Security Council.

Following the endorsement, Israel's ambassador to the U.N. Ron Prosor blasted the move.

"If the international community refuses to see this as a tragedy, that is a grave strategic error. But if it is aware of the tragedy, and it still chooses to pursue this dangerous path, that is a catastrophe," he said.

U.S. Ambassador Power, in remarks that drew the rebuke from Iran's representative, said the nuclear deal doesn't change the United States' "profound concern about human rights violations committed by the Iranian government or about the instability Iran fuels beyond its nuclear program, from its support for terrorist proxies to repeated threats against Israel to its other destabilizing activities in the region."

She urged Iran to release three "unjustly imprisoned" Americans and to determine the whereabouts of Robert Levinson, a former FBI agent who vanished in 2007.

"But denying Iran a nuclear weapon is important not in spite of these other destabilizing actions but rather because of them," Power said.

Under the nuclear agreement, Iran's nuclear program will be curbed for a decade in exchange for potentially hundreds of billions of dollars' worth of relief from international sanctions. Many key penalties on the Iranian economy, such as those related to the energy and financial sectors, could be lifted by the end of the year.