Trump is due to arrive in the U.K. for a working visit on July 13, where he plans to meet with May. But opposition MPs who have long tried to head off a Trump visit seized on the immigration debate to suggest May rescind her invitation.

The Scottish National Party’s Ian Blackford, citing the practice, asked May in Parliament: “Is the Prime Minister still intending to roll out the red carpet for Donald Trump?”

“On the very important issue that he’s raised, of what we have seen in the United States, the pictures of children being held in what appear to be cages are deeply disturbing,” May responded. "This is wrong. This is not something we agree with. This is not the United Kingdom’s approach.”

But she also defended the U.S.-U.K. visit while being heckled by opposition MPs who yelled “shame.”

The discord in London marks the latest political and diplomatic fallout from a policy that Trump and congressional Republicans are scrambling to address. 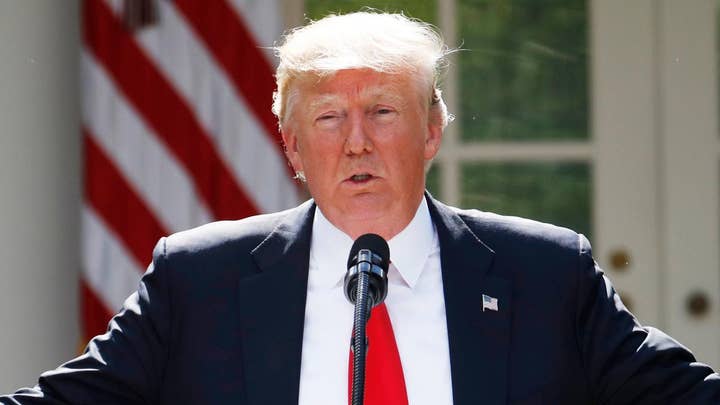 At issue is the practice of separating children from parents caught crossing the border illegally. It stems from the implementation of a “zero tolerance” policy calling for prosecutions across the board. Families are in turn being separated, because of a policy that predates this administration barring children from being held in those facilities for an extended period.

Trump on Wednesday signed an executive action keeping families together, while congressional Republicans work on legislation.

In London, the raucous scene was similar to the protests in Washington and other U.S. cities.

Blackford called May's answer “disappointing,” sparking groans from Tory MPs, and then went on to criticize the U.K.’s policy of indefinite detention of some illegal immigrants awaiting deportation.

The topic of child separation in the U.S. and Trump's visit came up again later in the session.

“President Trump has locked up 2,000 little children in cages and is refusing to release them unless he is allowed to build a wall. He has quit the U.N. Human Rights Council, praised Kim Jong Un’s treatment of his own people, turned away Muslims,” Labour Party MP Gavin Shuker said. “What does this man have to do to have the invitation she has extended revoked?”

May reiterated that she considers the U.S. stance wrong but reminded the chamber on the importance of the special relationship.

“When we disagree with the United States, we tell them so,” she said. “But we also have some key shared interests with the United States, in the security and defense field and in other areas as well, and it is right that we are able to sit down and discuss those with the president of a country with which we have had a longstanding ... special relationship.”

Left-wing Labour Party leader Jeremy Corbyn did not call for May to cancel the visit, but on Tuesday called the situation "immoral."

Not all voices in the U.K. were critical. Former U.K. Independence Party leader Nigel Farage urged Trump to stick to a tough line on the issue.

"Trump has got to stay tough on this and ignore all the screams coming from the liberal media," Farage said on "Fox & Friends."

Sky News reported on Wednesday that Trump is expected to meet with Queen Elizabeth II at Windsor Castle while on the visit.

“Yes, yes, I mean he has to see the head of state. Putting his foot on British soil, it's job one, it's very important, very symbolic,” U.S. Ambassador to the U.K. Robert Wood Johnson told Sky.