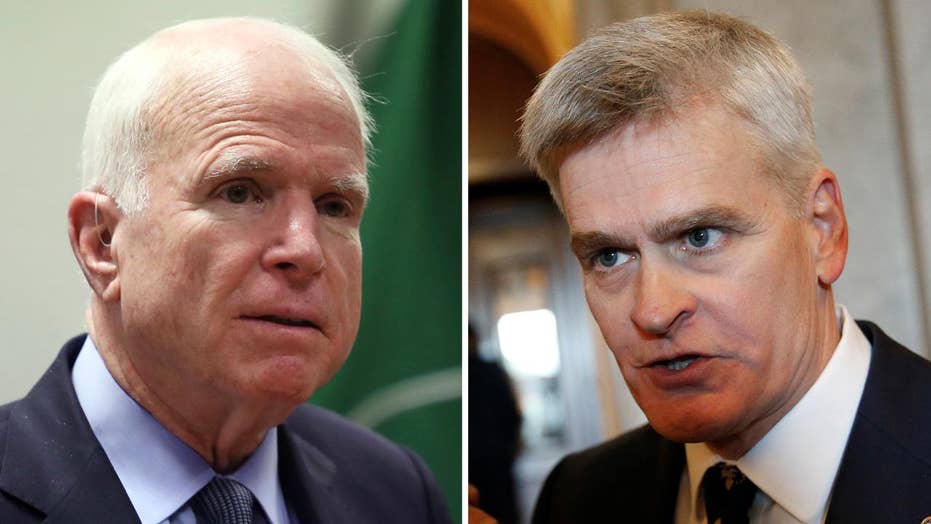 Two Republican lawmakers admitted Sunday the initial GOP bill to repeal and replace the nation’s health law is probably “dead” and President Trump’s proposal to solely repeal it appears to be a “non-starter.”

FILE - In this March 28, 2012 file photo, Sen. John McCain, R-Ariz. listens during a news conference on Capitol Hill in Washington. The Republican National Committee has announced that McCain will be one of the speakers at the 2012 GOP Convention in Tampa. (AP Photo/Jacquelyn Martin, File) (AP)

Sen. John McCain, R-Ariz., said in a televised interview on CBS it may now be time for Republicans to come up with a new proposal with support from Democrats.

"I think my view is it's probably going to be dead," McCain said of the GOP bill. If Democrats are included, he said, it doesn't mean "they control it. It means they can have amendments considered. And even when they lose, then they're part of the process. That's what democracy is supposed to be all about."

Sen. Chuck Grassley, R-Iowa, signaled pessimism as well. He wrote on Twitter late Saturday that Republicans will lose their Senate majority if they don’t pass health care legislation. Grassley added the party should be "ashamed" that it hasn't been able to repeal and replace the Affordable Care Act, or Obamacare.

Trump used Twitter Sunday afternoon to urge Republicans to follow through on their pledge to get rid of the health care law pushed by his predecessor.

"For years, even as a "civilian," I listened as Republicans pushed the Repeal and Replace of ObamaCare. Now they finally have their chance!," Trump said in a tweet.

At least 10 GOP senators have expressed opposition to the initial bill drafted by Senate Majority Leader Mitch McConnell, R-Ky. Republicans hold a 52-48 majority and Democrats stand united against the bill, meaning that just three GOP defections will doom it. The weeklong July 4 recess only raised more doubts among senators as many heard from constituents angry about the GOP bill and the prospect of rising premiums.

McConnell last week said he would introduce a fresh bill in about a week scuttling and replacing much of former President Barack Obama's health care law. But McConnell also acknowledged that if the broader effort fails, he may turn to a smaller bill with quick help for insurers and consumers and negotiate with Democrats.

U.S. Sen. Ted Cruz, R-Texas, pauses as he delivers a speech to 2014 Red State Gathering attendees, Friday, Aug. 8, 2014, in Fort Worth, Texas. Possible presidential candidate Cruz predicts Republicans will retake the Senate this year and that "2016 will be even better." (AP Photo/Tony Gutierrez) (AP)

Sen. Ted Cruz’s plan, which aims to lower premiums for healthy people, has drawn support from the White House and some conservatives in the House, which would have to approve any modified bill passed by the Senate. But his proposal has limited appeal to Republican moderates such as Grassley, who told Iowa Public Radio that it may be "subterfuge to get around pre-existing conditions."

Cruz on Sunday sought to dismiss Grassley's criticism as a "hoax" being pushed by Senate Democratic Leader Chuck Schumer, insisting that people will be able to get the coverage they need at an affordable price. Cruz cast his plan as a compromise to unify the party on a GOP health bill.

"When it comes to repealing Obamacare, what I think is critical is that Republicans, we've got to honor the promise we made to the voters that millions of Americans are hurting under Obamacare," Cruz said.

"In my view failure is not an option," he said.