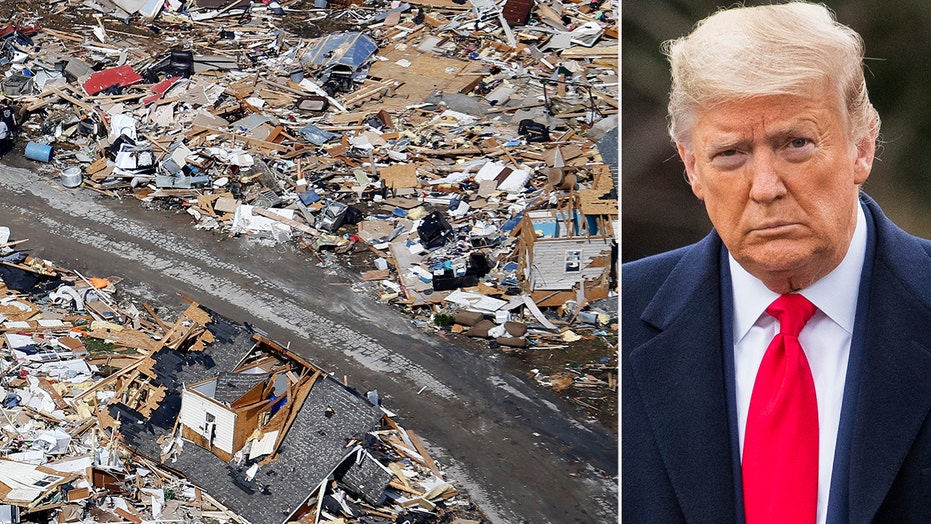 President Trump on Friday visited Tennessee after the state was hit by tornadoes earlier this week, leaving dozens dead and many more injured.

It is one of a number of visits he has taken to natural disaster sites as president. Here's a look at previous visits:

Trump visited Texas in September 2017 after the state was hit by Hurricane Harvey and left dozens dead. He started in Houston, which had been devastated by flooding.

The president, along with first lady Melania Trump and other officials, then traveled to Lake Charles, La., which was also hit by the storm. His visits included NRG Stadium, the home of the Houston Texans, which served as a recovery center for hurricane victims.

Before leaving Texas, the president stopped in a Houston neighborhood where debris were piled outside ranch-style homes.

"These are people that have done a fantastic job holding it together," he said.

Trump visited Florida the same month after Hurricane Irma hit the state in 2017. He surveyed the damage by helicopter and served lunch to victims recovering from the storm.

The president and vice president served lunch at Naples Estates, a mobile home park that was hit hard by the hurricane.

Trump visited Puerto Rico in October 2017 after it was hit by Hurricane Maria.

Trump viewed the damage from a helicopter, participated in several briefings with officials, met storm victims and toured the USS Kearsarge. He also met with senior military personnel and government officials, including Gov. Rosselló and Kenneth Mapp, the governor of the U.S. Virgin Islands, which was also severely damaged by the storm.

Maria was the most powerful hurricane to hit the island in nearly a century. It unleashed floods and mudslides that knocked out the island's entire electrical grid and telecommunications, along with many roads.

Trump traveled to both states after they were hit by Hurricane Florence in September 2018.

He served meals in North Carolina at a Baptist Church and thanked volunteers, while also posing for photographs with volunteers.

He later visited a South Carolina neighborhood and greeted people as he walked along the flooded streets.

He told people things are "going to be OK," and others thanked him for coming.

Trump visited Georgia and Florida in October 2018 after they were hit by Hurricane Michael. He visited farmers whose crops were wiped out. He spoke to one farmer who lost 100 percent of his cotton crop.

Trump flew to Georgia from Florida, where he surveyed hurricane damage in several Panhandle communities by air, land and foot.

During his helicopter tour of the storm-battered region, Trump saw uprooted trees and houses with blue tarps covering damaged roofs after his helicopter lifted from Eglin Air Force Base near Valparaiso. The severity of the damage worsened significantly as Trump approached Mexico Beach, a town of about 1,000 people that was nearly wiped off the map in a direct hit from the hurricane and its 155 mph winds.

Trump visited Alabama in 2019 after it was hit by tornadoes that killed 23 people.

The president touched down near where winds moved as quickly as 170 mph. Trump had signed a major disaster declaration for the county, freeing federal assistance to the region.

The president viewed the damage caused by the storm aboard Marine One. He also met victims in Opelika, Alabama, and received a briefing from the Lee County Emergency Management Agency.

As his motorcade wound through the county, Trump passed through entire neighborhoods that were destroyed, passing by empty lots with broken pieces of metal, wood and what appeared to be scattered clothing.