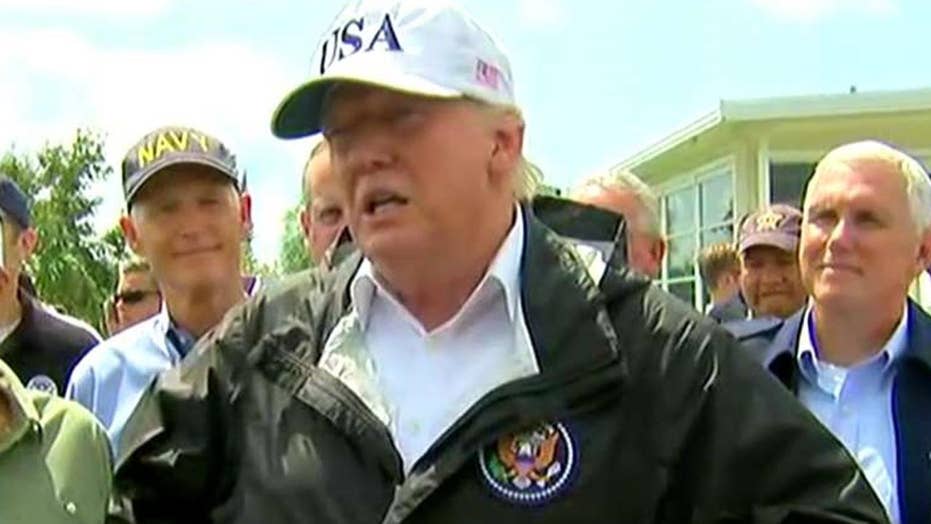 President Trump: We are there for you

Trump surveys hurricane damage and meets with victims of Irma

President Trump surveyed the damage from Hurricane Irma by helicopter, praised the work of first responders and served lunch to victims recovering from the storm during a trip to Florida on Thursday.

“We’ve seen the devastation,” Trump told reporters after arriving in Fort Myers. “We’re going to see some more of it now, unfortunately.”

The president expressed his appreciation for first responders and state officials grappling with the destruction from the hurricane.

“I just want to thank everybody,” Trump said.

Thursday’s trip was the president’s third visit in less than three weeks to survey storm damage and recovery efforts in the United States, following Hurricane Harvey in Texas.

For Trump and Pence, the visit Thursday to Naples and Fort Myers on Florida's southwestern coast offered the chance to see how people were coping and how the Federal Emergency Management Agency has responded.

Marine One flew so low during the 15-minute trip from Fort Myers to Naples that Trump was able get a good view of the flood damage.

The president and vice president served lunch at Naples Estates, a mobile home park that was hit hard by the hurricane.

“As the president said, we are with you today, will be with you tomorrow and we're going to be with you until Florida rebuilds bigger and better than ever before,” Pence said in Fort Myers.

The president monitored Irma over this past weekend from Camp David, the presidential retreat in Maryland.

Nearly half of Florida was engulfed by Irma, which left flooded streets, damaged homes and displaced residents in its wake.

Florida's southwestern coast is a haven for retirees seeking warm weather and beautiful sunsets across the Gulf of Mexico. Many communities are still cleaning up or without power or air conditioning.

In Lee County, which includes Cape Coral and Fort Myers, the Florida Emergency Management Agency said 66 percent of the area's 290,000 electrical customers were still without power Wednesday. Widespread outages led to long lines outside of the relatively few stores, gas stations and restaurants that had reopened.

The situation was even worse to the south in Collier County, home to Naples. Days after Irma passed, almost 80 percent of homes and businesses were still without electricity, and floodwaters still covered some communities entirely.

As of Thursday morning, the number of homes and businesses without electricity in Florida was 2.69 million, according to the agency. That's 25.6 percent of all customers in the state.

"We are working hard to get power back on. Our utilities have restored over 4-million homes already,” Scott said during Trump's visit.