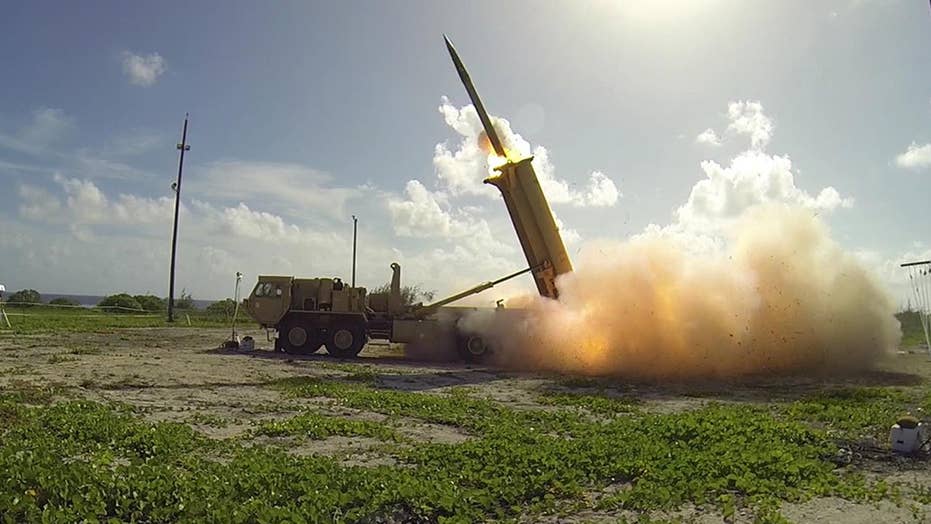 The Trump administration is close to finalizing a $100 billion arms deal with Saudi Arabia. Here’s what we know

Even an arms deal with one of our oldest and most reliable allies in the war on terror is eliciting cries of foul from critics of the Trump Administration.

The White House is putting the finishing touches on an up to $300 billion arms sale with Saudi Arabia that will include the advanced Terminal High Altitude Area Defense (THAAD) anti-ballistic missile system, littoral combat ships designed to fight in shallow water close to shore and precision guided munitions designed to limit civilian casualties.

The deal will initially be $100 billion but could reach $300 billion over a decade.

The exact terms of the deal are expected to be released when President Trump is in Saudi Arabia on Friday.

Much of the arms sale was actually structured during the Obama Administration, before being shelved last October after Saudi jets bombed a Yemeni funeral hall, killing more than 100 people.

But the Obama administration itself was divided over the Saudi deal.

“I think it was a mistake not to go forward with the sale, and I think it makes sense for the Trump administration to reverse that decision and go forward with it,” said Gerald Feierstein, President Obama’s ambassador to Yemen. “I think it’s the right move.”

A current U.S. official briefed on the plan told Fox News that the deal gives Saudis the capability to conduct precision strike in order to minimize civilian casualties in Yemen.

“I think you will see additional precision capabilities for the Saudis,” the official said, “including a training program to improve their precision targeting and on the law of armed conflict.”

Critics argue that any escalation of the Yemeni conflict could ultimately backfire on efforts to restore stability to the region.

"If the expected announcement contains plans to sell the Saudis offensive arms, like precision-guided munitions, I will strongly oppose it until we can certify that they are targeting terrorist organizations instead of civilians,” Murphy told Fox News.

But Feierstein and others say upgrading Saudi military capabilities is an effective option in dealing with the Houthi rebels in Yemen, whom Riyadh and Washington say are backed and led by Iran.

“We need to be more sympathetic than we have been to the Saudi concerns about the Iranian threat to security and stability and the danger that a pro-Iranian government would pose in Yemen on their southern border,” Feierstein said. “In my view, the arms deal increases the military pressure on the Houthis that there is not a solution through violence and armed conflict. That’s not where we are now.”

SAUDI ARABIA COUNTING DOWN THE SECONDS UNTIL TRUMP ARRIVES

The U.S. official who spoke to Fox News confirms the Saudi arms deal is focused “on Gulf security, particularly with an eye to Iran, given concerns about Iran following the JCPA,” or Iran nuclear deal, “to the letter.” Indeed, Iran reportedly continues to develop ballistic missiles capable of carrying nuclear weapons, despite United Nations prohibitions.

While the Patriot anti-missile systems developed by U.S.-based Raytheon have intercepted Scuds launched by the Houthis against Saudi Arabia, the new ballistic missile capabilities reportedly being developed by Iran call for an upgrade to THAAD.

THAAD is designed by Lockheed Martin, and a deal this size is expected to have a massive impact on the U.S. defense sector, experts say.

Just as important is what the deal does not include, the U.S. official told Fox News. No cluster munitions, no F-35’s and no ManPads.

Cluster munitions release many smaller bomblets on a target, and, if used improperly, can cause horrific numbers of civilian casualties.

ManPads, or Man-Portable Air-Defense Systems, are generally shoulder-fired anti-aircraft missiles that Saudi Arabia has, in the past, expressed a desire to send to Syrian rebels. That raised concerns that these sophisticated systems would fall into the wrong hands.

“One of the things we have to keep our minds on is Israel’s qualitative military edge,” said the U.S. official, who said the U.S. doesn’t believe the arms deal upsets Israel’s lead in the balance of power in the region.

The Trump administration is still developing its overall strategy for the Middle East.

“President Trump understands that ‘America First’ does not mean America alone,” National Security Adviser H.R. McMaster told reporters last week, “To the contrary, prioritizing America’s interests means strengthening alliances. He will encourage our Arab and Muslim partners to take bold, new steps to promote peace and to confront those, from ISIS to al Qaeda to Iran to the Assad regime, who perpetuate chaos and violence that has inflicted so much suffering throughout the Muslim world and beyond.”

Some military analysts are worried that means too much of a hands-off approach.

“What the deal does not make clear is whether the United States will take a more active role in Yemen, Syria, and other hot spots, or will back off and let the Saudis take care of regional problems,” said Mark Moyar, director of the Center for Military and Diplomatic History, “If the United States takes a hands-off approach to Yemen, there seems to be little likelihood of a diplomatic resolution.”

Moyar said he would like to see American boots on the ground in Yemen in the form of combat advisors who can direct airstrikes. Training a new generation of Saudi air combat controllers “takes time,” he said.

“The best results,” he said, “are generational.”