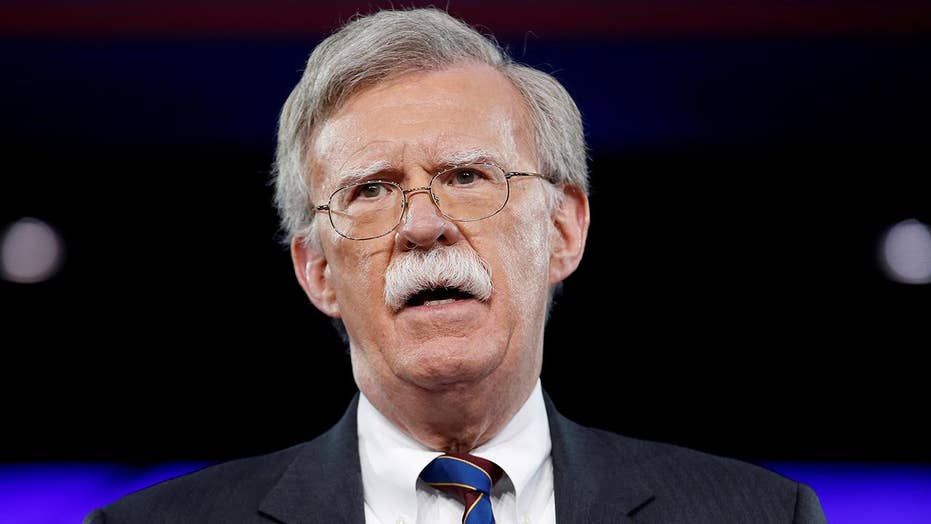 Trump announced late Thursday that Bolton would replace H.R. McMaster in the post, and while the Bush-era hawk's staunch defense of the war in Iraq may conflict with Trump’s more skeptical approach, his stand on other issues -- along with his penchant for getting in the face of his opponents -- makes him a natural fit for the Trump White House.

"I think what you said is offensive and inappropriate -- you are a munchkin in the media,” Bolton said to a Sky News host in January who asked if Trump was a “slippery fish.”

While he served at the U.N., he was no fan of the place, saying in 1994 that if the headquarters in New York City lost 10 stories, “it wouldn’t make a bit of difference.”

So controversial was Bolton, who served under the Reagan and both Bush administrations and who is a former Fox News contributor, that he was unable to gain enough votes to be confirmed by the Senate as U.N. ambassador and was instead appointed by recess. He has also mulled presidential runs in 2012 and 2016.

But while Trump has been hesitant on the value of military action in far-away theaters, Bolton’s hawkishness and bullishness do align somewhat with Trump.

Particularly they both share a strong skepticism of the 2015 Iran nuclear deal, which Trump has repeatedly promised to tear up if it cannot be satisfactorily re-negotiated. Bolton has gone even further. In 2015, Bolton wrote an article for The New York Times, titled: “To Stop Iran’s Bomb, Bomb Iran.”

“In 1837 Britain unleashed pre-emptive ‘fire and fury’ against a wooden steamboat,” he wrote. “It is perfectly legitimate for the United States to respond to the current “necessity” posed by North Korea’s nuclear weapons by striking first.”

It is not clear if he will support Trump’s move to meet with North Korean leader Kim Jong-un. He has also expressed significantly more skepticism about Russia and has called for a “strong response” from NATO to the poisoning of a former spy in the U.K.

But Axios reported that Bolton has a reputation not only for having hawkish tendencies, but also for getting things done.

“My problem with you, over the years, has been, you’re too competent,” then-Sen. Joe Biden told Bolton during his 2001 confirmation hearing for undersecretary of State for arms control and international security affairs.

Bolton said as much himself in an interview on Fox News’ "The Story" Thursday night.

“I’ve been in a lots of bureaucracies, and I’ve seen the way that bureaucracies that don’t like decisions, sit on them,” he said. “So I know my way around the corridors in Washington and I think that role will also be important.”

Sen. Chuck Schumer, D-NY, said in a statement Thursday night that he hoped Bolton would “temper” his military-first instincts.

“Mr. Bolton’s tendency to try to solve every geopolitical problem with the American military first is a troubling one,” Schumer said. “I hope he will temper his instinct to commit the men and women of our armed forces to conflicts around the globe, when we need to be focused on building the middle class here at home.”

Sen. Graham: Bolton is a leading from the front kind of guy

Sen. Chris Coons, D-Del., a member of the Senate Foreign Relations Committee, said he was “deeply concerned” by Bolton's positions and he hoped Bolton would “moderate his positions and work closely with our military, diplomatic, intelligence, and development professionals before rushing into armed conflict.”

But Republican hawks welcomed the appointment.

“He believes in a strong military, going after terrorists, taking the gloves off,” Sen. Lindsey Graham, R-S.C. said on "Fox and Friends."

“He is a diplomat. But he understands that if you're going to deal with thugs like in Iran, you have to be taken seriously.

Bolton is likely to encourage Trump’s more bullish tendencies when it comes to foreign policy, and some lawmakers are expecting a significant pivot in terms of foreign policy remarks from the White House.