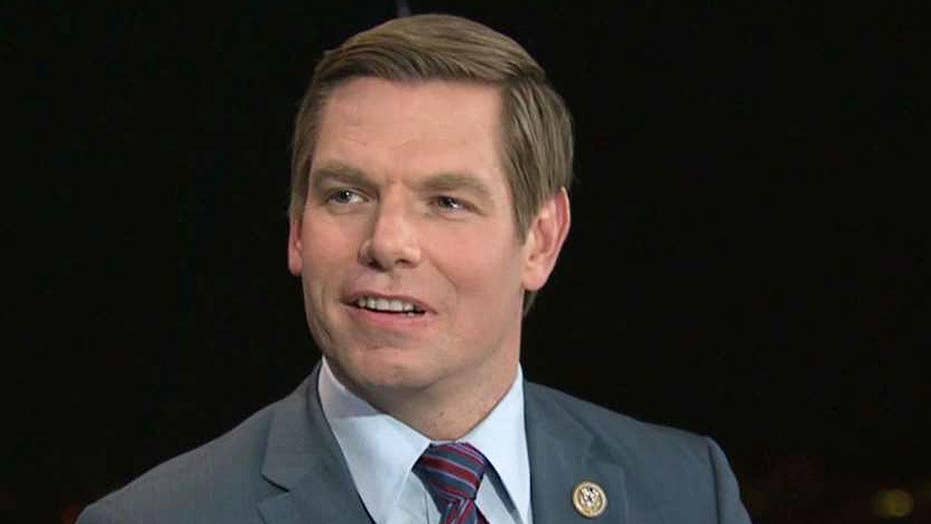 Big questions on how to pay for Trump's budget

Democrats have lots of questions after President Trump says plans to seek 'historic' $54 billion increase in defense spending, while pursuing cuts elsewhere in the federal government, in his budget outline #Tucker

The result is that Trump's initial budget wouldn't dent budget deficits projected to run about $500 billion.

White House budget officials outlined the information during a telephone call with reporters given on condition of anonymity. The budget officials on the call ignored requests to put the briefing on the record, even though Trump on Friday decried the use of anonymous sources by the media.

“The president will propose and the Congress will dispose,” Rep. Charlie Dent, R-Pa., told Politico. “We’ll look at his budget, but at the end of the day we in Congress write the appropriations bills, and I am not one who thinks you can pay for an increase in (military) spending on the backs of domestic discretionary programs, which constitute 13 or 14 percent of all federal spending.”

Trump's defense budget and spending levels for domestic agency operating budgets will be revealed in a partial submission to Congress next month, with proposals on taxes and other programs coming later.

The big, approximately 10 percent increase for the Pentagon would fulfill a Trump campaign promise to build up the military. The senior budget office official said there will be a large reduction in foreign aid and that most domestic agencies will have to absorb cuts. He did not offer details, but the administration is likely to go after longtime Republican targets like the Environmental Protection Agency.

Tentative proposals for the 2018 budget year that begins Oct. 1 are being sent to agencies, which will have a chance to propose changes to the cuts as part of a longstanding tradition at the budget office.

Trump's budget, once finalized and sent to Congress in mid-March, is sure to set off a huge Washington battle. Democrats and some Republicans are certain to resist the cuts to domestic agencies, and any legislation to implement them would have to overcome a filibuster threat by Senate Democrats. A government shutdown is a real possibility.

Capitol Hill aides confirmed details of the upcoming blueprint on the condition of anonymity to discuss information that's not yet been made public.

Trump's first major fiscal marker will land in the agencies one day before his first address to a joint session of Congress. For Trump, the primetime speech is an opportunity to refocus his young presidency on the core economic issues that were a centerpiece of his White House run.

The upcoming submission covers the budget year starting on Oct. 1. But first there's an April 28 deadline to finish up the unfinished spending bills for the ongoing 2017 budget year, which is almost half over, and any stumble or protracted battle could risk a government shutdown then as well.

The March release is also expected to include an immediate infusion of 2017 cash for the Pentagon that's expected to register about $20 billion or so and contain the first wave of funding for Trump's promised border wall and other initiatives like hiring immigration agents.

The president previewed a boost in military spending during a speech Friday to conservative activists, pledging "one of the greatest build-ups in American history."