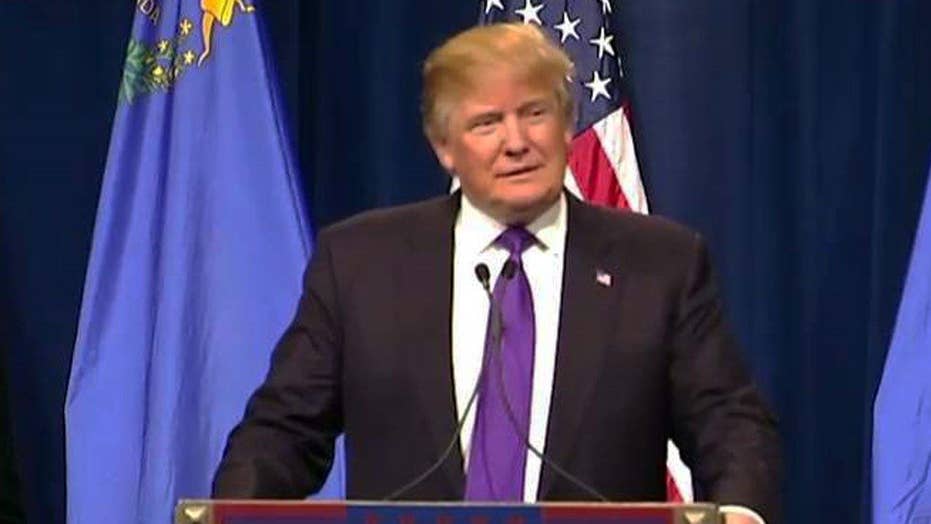 Trump: You're going to be proud of your president

Donald Trump scored a convincing victory Tuesday night in the Nevada Republican Caucus — a third straight win that builds upon his momentum heading into next week's Super Tuesday and delivers a sharp warning to his rivals and the party establishment that time may be running out to slow his march to the nomination.

With 96 percent of precincts reporting, Trump led with 46 percent, followed by Rubio at 24 percent and Cruz at 21 percent.

Far behind were retired neurosurgeon Ben Carson and Ohio Gov. John Kasich, who earned 5 percent and 4 percent of votes, respectively.

Before a cheering crowd of supporters in Las Vegas, Trump teased those who predicted he wouldn’t do well in this contest and others.

This is the third win in a row for Trump, who earlier this month won South Carolina and New Hampshire after placing second in Iowa. His winning streak gives him significant momentum as he heads into next week's Super Tuesday contests, the biggest prize of the campaign so far.

More than a dozen states hold primaries or caucuses that day, awarding nearly 600 delegates – or more than four times the number that have been awarded in the first four states combined.

Entrance polls in Nevada showed Trump was buoyed by support from a range of groups, including Hispanics and evangelicals. And he dominated among caucus-goers who said they prefered an outsider.

While Trump builds his base, Rubio and Cruz are still fighting to cut into his lead, with diminishing opportunities to do so.

Rubio has enjoyed some momentum after his second-place finish Saturday in the South Carolina primary. But even as he wins over endorsements from "establishment" figures, the Florida senator has yet to notch his first election victory, raising continuing doubts over whether he could be a successful Trump alternative.

He did get one high-powered vote on Tuesday, though -- a spokeswoman said Nevada Gov. Brian Sandoval cast his ballot for Rubio.

Cruz, meanwhile, is trying to shake doubts about his campaign and recover after a tough stretch during which his campaign repeatedly was accused of "dirty tricks" -- leading him to fire his top spokesman over one incident.

At Cruz's watch party in Vegas, he maintained he’s still the best candidate to go up against Trump – and the Democratic nominee. In a knock at Rubio, he noted only two candidates, him and Trump, have won one of the first three contests and said voters will have a “clear choice” next Tuesday.

“One week from today will be the most important night of this campaign,” Cruz said.

Cruz won the Iowa caucuses, but has struggled to follow that up since. He finished third in South Carolina, despite an electorate full of the kind of evangelical voters who thus far have carried his campaign.

Trump charged into Nevada with unrelenting attacks on Cruz’s character.

"There's something wrong with this guy," Trump said at a Las Vegas rally Monday night. On Tuesday, he called Cruz a "soft, weak, little baby" who lies.

Polls had shown Trump leading in Nevada, but polling in The Silver State is sparse and the contest is often unpredictable. Mitt Romney won the last two GOP caucuses in 2008 and 2012.

Nevada’s voting took place in schools, community centers and places of worship across the state. There were reports of long lines and even caucus volunteers wearing campaign attire – specifically pro-Trump.

But state Republican officials said it was “not against the rules for volunteers to wear candidate gear.” One GOP official told reporters looking at complaints on Twitter to “take a deep breath,” saying the state was looking at high turnout and enthusiasm.

Early Wednesday, the Nevada Republican Party announced that over 75,000 voters had cast ballots, a new turnout record for the caucus.

The caucus marked the first Republican election in the West, and the fourth of the campaign.

Trump's rivals concede they are running out of time to take him on. The election calendar suggests that if the New York billionaire's rivals don't slow him by mid-March, they may not ever. Trump swept all of South Carolina's 50 delegates, giving him a total of 67 compared to Cruz and Rubio who had 11 and 10, respectively, heading into Nevada.

An Associated Press tally early Wednesday showed Trump with 12 of Nevada's 30 delegates, while Cruz and Rubio each received five with another eight delegates yet to be allocated.

Rubio and Cruz have been laying into each other viciously in recent days, an indication they know Trump can be slowed only if one of them is eliminated.

Rubio -- who finished third in Iowa and fifth in New Hampshire -- had already left Nevada, preferring to campaign in Minnesota and Michigan. In recent days, he has also picked up support from such Republican establishment heavyweights as Arkansas Gov. Asa Hutchinson, North Carolina Sen. Thom Tillis and Utah Sen. Orrin Hatch.

"We have incredible room to grow," Rubio told reporters during a Monday night news conference on his campaign plane.