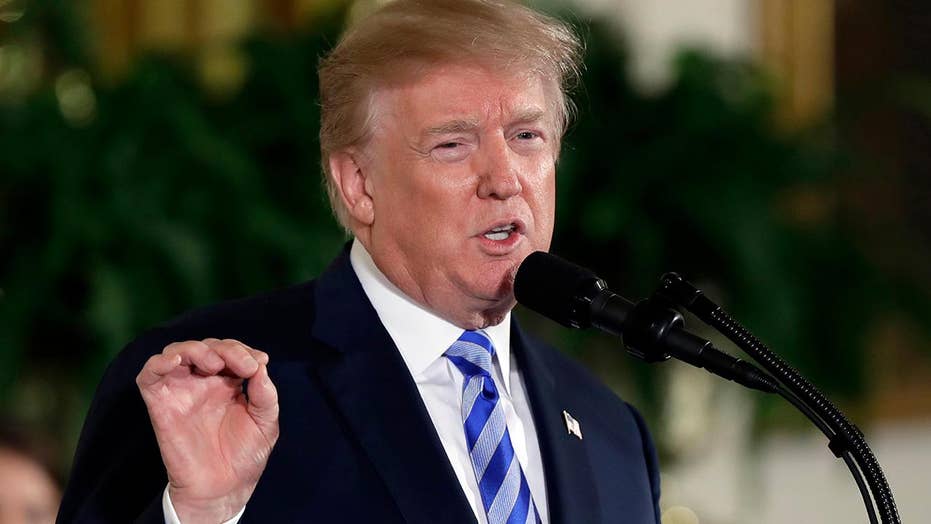 During an event at the White House, the president announced he signed a memo ordering the regulations on “bump stocks” and told Sessions he wants new federal guidelines finalized “very soon.

He also signaled support for additional changes to gun legislation, tweeting Tuesday evening, “Whether we are Republican or Democrat, we must now focus on strengthening Background Checks!”

The memo, released by the White House on Tuesday, directs the DOJ to propose a rule “banning all devices that turn legal weapons into machineguns.”

Trump wrote in the memo, “Although the Obama administration repeatedly concluded that particular bump stock type devices were lawful to purchase and possess, I sought further clarification of the law restricting fully automatic machineguns.”

A spokesman for the DOJ said it is acting "quickly" on the president's order.

“The department understands this is a priority for the president and has acted quickly to move through the rulemaking process," spokesman Sarah Isgur Flores said. "We look forward to the results of that process as soon as it is duly completed.”

“I can tell you the president supports not having the use of bump stocks and that we expect further action on that in the coming days,” White House Press Secretary Sarah Sanders said Tuesday.

Sanders added that the president had ordered the Justice Department and the Bureau of Alcohol, Tobacco, Firearms and Explosives to review the regulation of bump stocks after a gunman opened fire on concert-goers on the Las Vegas strip in October, killing more than 50 people.

“My understanding is that review has been completed and movement will take place on that shortly,” Sanders said.

In the wake of last week’s school shooting in Parkland, Fla., that killed 17 people, Sanders said Trump plans to host parents, teachers and students on Wednesday to discuss “efforts to ensure safety at our schools.” Among those attending will be members of the Parkland community and those affected by the Sandy Hook and Columbine school shootings, the White House added.

Liberals have renewed calls for new gun control measures after last week’s shooting. Trump, who was backed by the NRA during the 2016 election, has expressed support for the Second Amendment and has said he’s against reflexive gun control measures that wouldn’t make a difference.

Sanders said the White House hasn’t “closed the door on any front.”

She also said, “The president has expressed his support for efforts to improve the federal background system and in the coming days we will continue to explore ways to ensure the safety and security of our schools.”

Meanwhile, the state House in Florida, days after the Parkland shooting, on Tuesday voted down a motion to take up a bill that would ban so-called assault rifles, effectively killing the measure for this session. The motion failed by a 36-71 vote.