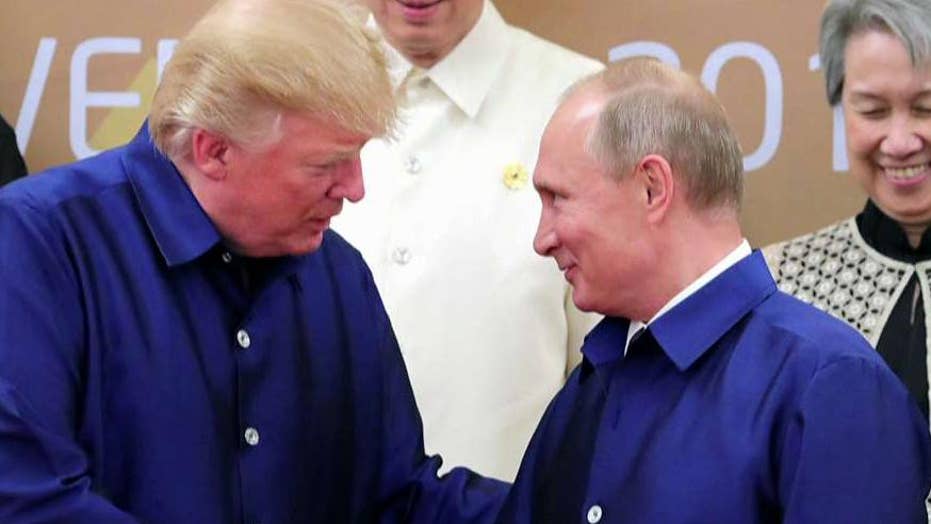 Trump: We could use Russia's help with NKorea

On the homestretch of his whirlwind trip to Asia, President Donald Trump tweeted a defense of his efforts to establish a rapport with Russian President Vladimir Putin, saying that the Kremlin "can greatly help" Washington with global trouble spots.

"When will all the haters and fools out there realize that having a good relationship with Russia is a good thing, not a bad thing[?]" asked Trump before accusing critics of "always playing politics -- bad for our country."

"Why would Kim Jong-un insult me by calling me 'old,' when I would NEVER call him 'short and fat?'" the president wrote. "Oh well, I try so hard to be his friend - and maybe someday that will happen!"

The tweets came a day after Trump said he believed Putin was sincere when the Russian leader denied that Moscow had interfered in last year's presidential campaign.

"Every time he sees me, he said: 'I didn't do that.' And I believe — I really believe — that when he tells me that, he means it," said Trump, who also dismissed former top U.S. intelligence officials as "political hacks."

Multiple U.S. intelligence agencies have concluded that Moscow meddled in the 2016 election to try to help Trump win. But the president argued there's plenty of reason to be suspicious of their findings.

"I think that [Putin] is very, very strong in the fact that he didn't do it," Trump told reporters on board Air Force One Saturday as he traveled to Hanoi, Vietnam. " ... And then you hear it's 17 [intelligence] agencies [who say Russia interfered]. Well, it's three. And one is [former CIA Director] John Brennan and one is whatever. I mean, give me a break. They're political hacks.

Trump and Putin did not have a formal meeting while they were in Vietnam for the Asia-Pacific Economic Cooperation summit, but the two spoke informally several times and reached an agreement on a number of principles for the future of war-torn Syria.

Trump made clear that the issue of Russian meddling in the election hovers over the leaders' relationship and said it jeopardized their ability to work together on issues including North Korea's escalating nuclear program and the deadly conflict in Syria.

"Well, look, I can't stand there and argue with him," Trump said. "I'd rather have him get out of Syria, to be honest with you. I'd rather have him, you know, work with him on the Ukraine than standing and arguing about whether or not — 'cause that whole thing was set up by the Democrats."

Earlier Saturday, the Kremlin issued a statement saying the leaders had reached agreement on a number of principles for the future of civil war-torn Syria now that the Islamic State group has largely been pushed out. Among the agreements' key points, according to the Russians, were an affirmation of de-escalation zones, a system to prevent dangerous incidents between American and Russian forces, and a commitment to a peaceful solution governed by a Geneva peace process.

The Kremlin quickly promoted the agreement as the White House stayed silent. Trump told reporters that the deal was reached "very quickly" and that it would save "tremendous numbers of lives." And he praised his relationship with Putin, saying the two "seem to have a very good feeling for each other and a good relationship, considering we don't know each other well."

Video from the summit in the seaside city of Danang, Vietnam, showed Trump and Putin shaking hands and chatting, including during the world leaders' traditional group photo. The two walked together down a path to the photo site, conversing amiably, with Trump punctuating his thoughts with hand gestures and Putin smiling.