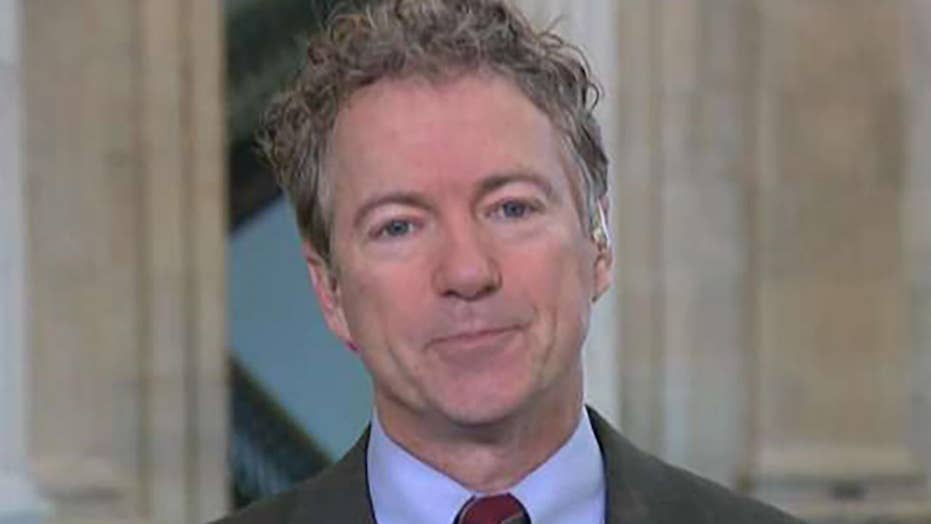 Republican senator explains on 'America's Newsroom' how the money being spent on the war in Syria should be used to take care of America first.

U.S. Sen. Rand Paul reiterated his support for President Trump's decision last week to remove 2,000 American troops from Syria, appearing on Sunday talk shows to assert that the president had made the right move and was doing "exactly what he promised" voters when he campaigned in 2016.

“We’ve been there 17 years. We think now we’re going to take one more village and we’ll get a better-negotiated deal?” Paul said during an appearance in CBS's "Face the Nation." "The North Vietnamese and Vietcong "waited us out and the Taliban are going to wait us out. They know we will eventually leave and leave we must.”

He added: “The president’s right and I think the people agree with him. Let’s rebuild America. Let’s spend that money here at home.”

Trump acknowledged Rand's support for an Afghanistan withdrawal in a Twitter message late Sunday night, in which the president simply quoted Rand's comments.

The president did the same earlier Sunday with a quote from Rand's appearance on CNN's "State of the Union," adding a simple "Thanks @RandPaul."

"This is exactly what he promised," Rand had said of the president's Syria announcement, "and I think the people agree with him. We’ve been at war too long and in too many places ... spent several trillion dollars on these wars everywhere. He’s different ... that’s why he got elected."

Former U.S. Sen. Rick Santorum, R-Pa., cautioned that Trump’s base may not support his decision to withdraw troops from Syria “without a plan.”

“There are good weeks and bad weeks when you’re an executive in government," Christie said on ABC’s "This Week." "And this wasn’t one of the best weeks that he’s had."

On Wednesday, Trump had declared victory over the Islamic State group (ISIS) and announced plans to withdraw some 2,000 American troops from Syria.

The U.S. began airstrikes in Syria in 2014, and ground troops moved in the following year to battle ISIS and train Syrian rebels in a country torn apart by civil war. Trump declared their mission accomplished in a tweet.

Trump later acknowledged that he had spoken with President Recep Tayyip Erdogan, and said the Turkish leader had affirmed his country’s ability to maintain order in the region.

'IT'S ONE OF THE REASONS HE WON': RAND PAUL BACKS TRUMP'S DECISION TO WITHDRAW TROOPS FROM SYRIA

ISIS is significantly diminished but remains a deadly force, military advisers say. U.S. partners warn that a premature American withdrawal will allow them to storm back.

ISIS militants still hold a string of villages and towns along the Euphrates River in eastern Syria, where they have resisted weeks of attacks by the U.S.-supported Syrian Democratic Forces to drive them out.

The pocket is home to about 15,000 people, among them 2,000 ISIS fighters, according to U.S. military estimates.