Trump, son push back on NYT report on Russia collusion

President Donald Trump and son Donald Trump Jr. pushed back Sunday on a New York Times story that states the younger Trump and other members of the president's campaign met in June 2016 with a Russian lawyer with the expectation of getting “damaging information” on Democratic candidate Hillary Clinton.

Trump Jr. said he was asked by an acquaintance to meet with the lawyer, Natalia Veselnitskaya, who was described to him as somebody who “might have information helpful to the campaign.”

The president's eldest son also said that Veselnitskaya claimed to know about "individuals connected to Russia [who] were funding the Democratic National Committee and supporting Ms. Clinton."

Trump Jr. said he ended the meeting after about 25 minutes, upon concluding that Veselnitskaya's statements were "vague, ambiguous and made no sense."

"It quickly became clear that she had no meaningful information," he said. 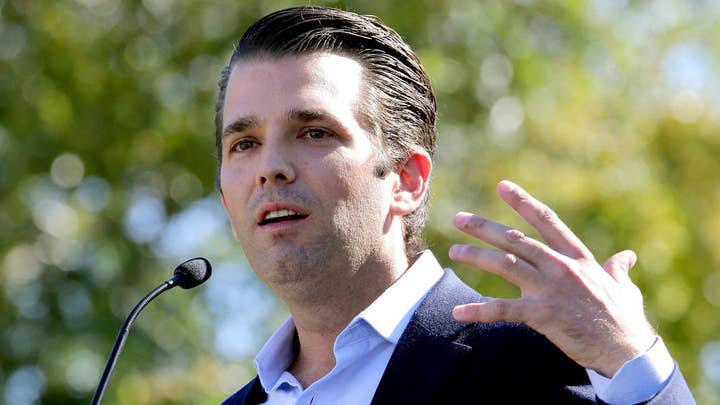 The Times story is a follow-up to an initial report about the meeting that was posted online Saturday. The report states the meeting “points to the central question in federal investigations” about whether the Kremlin meddled in the 2016 presidential election and whether the Trump campaign colluded with Russian officials.

“The accounts of the meeting represent the first public indication that at least some in the campaign were willing to accept Russian help,” Sunday's report states.

The Times reported that Trump Jr. was initally asked about the Veselnitskaya meeting on Saturday and said only that it was primarily about allowing Americans to adopt Russian children and “mentioned nothing about Mrs. Clinton.”

On Sunday, Trump Jr. said that Veselnitskaya's claims of having potentially helpful information were a "pretext" for the meeting's “true agenda” -- the adoption issue.

Mark Corallo, a spokesman for President Trump’s outside legal team, said, “The president was not aware of and did not attend the meeting."

Several investigations into allegations of Russian meddling and possible collusion with the Trump campaign -- include an FBI probe and at least two congressional investigations -- have yet to produce clear evidence that the president or anybody on his campaign team colluded with Russia to defeat Clinton.

The meeting with Veselnitskaya was also attended by Paul J. Manafort, Trump’s campaign chairman at the time, and Trump’s son-in-law, Jared Kushner, according to The Times.

The Trump and Trump Jr. statements were included in The Times story Sunday.

Manafort and Kushner have disclosed the meeting in amended government documents. Kushner responded to the Saturday story, but neither has so far publicly commented on the Sunday report.