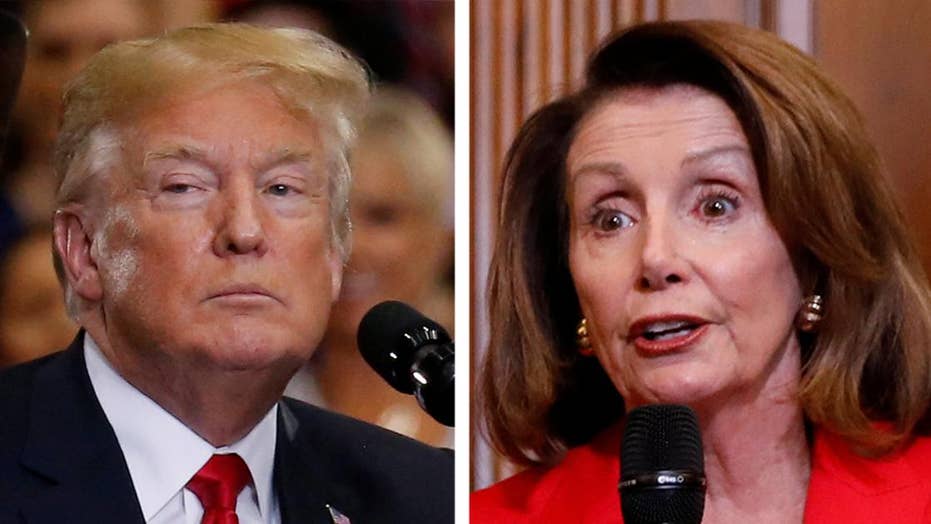 President Trump blasts the House minority leader as he fires up supporters at the Make America Great Again Rally in Nashville, Tennessee.

Trump, who defended labeling members of the MS-13 gang as “animals,” hit the House minority leader for taking exception with the classification. “We are all God’s children,” Pelosi argued in response last week.

The president’s fiery comments, in front of a large crowd Tuesday at the Municipal Auditorium in Nashville, were made to boost GOP Senate hopeful Marsha Blackburn.

Trump did not mention the earlier cancellation of Roseanne Barr's television show.

Blackburn, a Republican congresswoman, is vying for her party’s nomination to replace retiring Corker, a Republican. Blackburn and Bredesen are expected to face off in a general election that is considered a toss-up by Fox News.

“They’re more interested in taking care of criminals than they are in taking care of you,” Trump said of Democrats as the crowd booed. The president said Bredesen, whom he claimed he had never even heard of, “donated a lot of money to the campaigns of Barack Obama and Hillary Clinton.”

"Democrats have opposed every common sense measure to stop this horrendous scurge of crime, to dismantle MS-13 and to end illegal immigration," he continued.

“You have to get out,” to vote, Trump said. “We need Marsha Blackburn to win. And it’s going to be a very special time. Together we are taking back our country. We are returning the power back to our great American patriots.”

"Tennessee needs a senator that’s going to support President Donald Trump and I am going to be there to stand with President Trump to take your Tennessee values to Washington, D.C. to fight with him to get the job done," Blackburn said.

The campaign in Tennessee is among several races crucial to Trump’s plans to maintain control of the Senate, where Republicans have a two-seat majority.

Trump won Tennessee with more than 60 percent of the vote in the 2016 presidential election.

“This November, this is the state were America’s comeback will continue full speed ahead,” the president said.

Primaries are scheduled for Aug. 2.

Earlier in the evening Trump resurrected talk of the construction of a southern border wall, reiterating a campaign promise that Mexico would pay for it.

That claim was met with a swift tweet from Mexican President Enrique Pena Nieto.

"President @realDonaldTrump: NO. Mexico will NEVER pay for a wall," he wrote. "Not now, not ever. Sincerely, Mexico (all of us)."

He did not discuss any additional details on the plan.