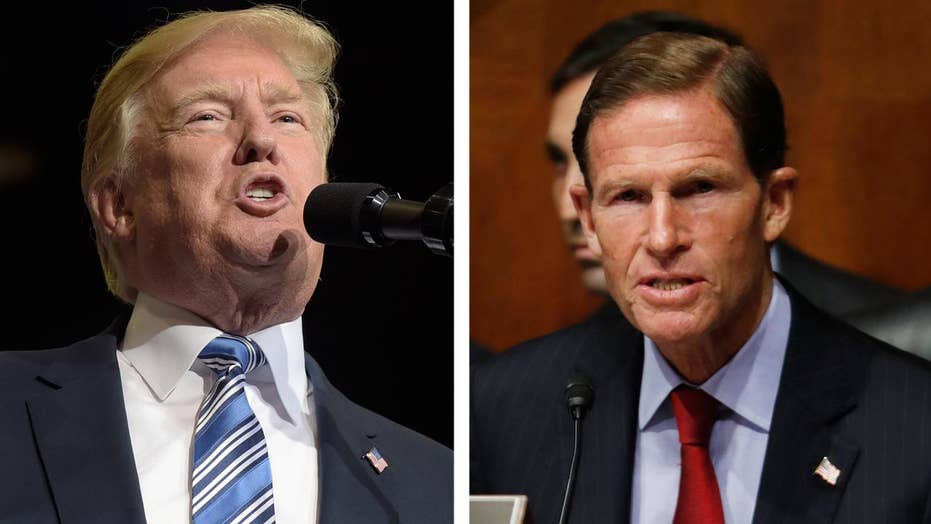 President Trump lashed out at Sen. Richard Blumenthal in a tweetstorm early Monday, slamming him as a “phony Vietnam con artist,” after comments the Connecticut Democrat made against the Trump administration on a morning news program.

“Interesting to watch Senator Richard Blumenthal of Connecticut talking about hoax Russian collusion when he was a phony Vietnam con artist!” Trump tweeted Monday morning. “Never in U.S. history has anyone lied or defrauded voters like Senator Richard Blumenthal. He told stories about his Vietnam battles and conquests, how brave he was, and it was all a lie. He cried like a baby and begged for forgiveness like a child. Now he judges collusion?"

The president was referring to a controversy that arose during Blumenthal’s 2010 campaign, when he claimed that he served in the Vietnam War.

“I served during the Vietnam era,” Blumenthal said in 2008. “I remember the taunts, the insults, sometimes even physical abuse.

He told a gathering of families who were expressing support for returning American troops in 2003 that, “when we returned, we saw nothing like this.”

But according to The New York Times, Blumenthal, 71, got five military deferments that let him avoid deployment. Blumenthal addressed the controversy in a press conference during his 2010 Senate campaign, and clarified that he served “during” the war as a reservist, and not “in” the war overseas.

Trump’s tweets lashing out at Blumenthal came after the Connecticut senator's Monday appearance on CNN’s “New Day,” where he criticized the Trump Justice Department for its new leak policy, questioning the “personal and political” motives from Attorney General Jeff Sessions and the White House.

“I’m concerned that the Justice Department is weaponizing these laws for its personal and political ends, and specifically, for the White House’s purposes,” Blumenthal said, questioning Attorney General Jeff Sessions’ announcement last week of a new counterintelligence unit to prioritize cases involving unauthorized disclosures, in an effort to crackdown on administration leaks.

In a tweet of his own, Blumenthal responded to Trump by saying: "Your bullying hasn't worked before and it won't work now. No one is above the law.