President Trump declared America “open for business” in a speech Friday to global elites in Davos, Switzerland, while taking a hard line on trade and vowing to make commerce with other countries “fair and reciprocal.”

"There has never been a better time to hire, to build, to invest and to grow in the United States," he said. "America is open for business and we are competitive once again."

Trump spent much of his speech outlining the economic highlights of his presidency and selling its strengths to the gathered business and finance leaders.

“After years of stagnation, the United States is once again experiencing strong economic growth. The stock market is smashing one record after another and has added more than $7 trillion in new wealth since my election,” he said. “Consumer, business and manufacturing confidence are the highest they’ve been in many decades.”

Trump slammed regulation (which he called “stealth taxation”) and touted his administration’s deregulation and tax cuts to make America more hospitable to business.

“Now is the perfect time to bring your business, your jobs, your investments back to the United States,” he said.

However, while citing the strength of free market deregulation and tax cuts, he also warned that he wanted international trade not just to be free, but fair.

“We will enforce our trade laws and restore integrity to the trading system,” he said. “Only by insisting on fair and reciprocal trade can we create a system that works not just for the United States but for all nations.”

He promised that the U.S. would “no longer turn a blind eye” to unfair trade practices from other countries, such as intellectual property theft and other predatory  behaviors that he said distort the markets and hurt workers in America.

"As president of the United States, I will always put America first just like the leaders of other countries should put their country first also," he said. "But 'America First' does not mean America alone."

While the speech had a heavy emphasis on economics and finance, that "America First" message was similar to the message he delivered to the United Nations General Assembly in September, where he told gathered world leaders that they too should put their own country’s first in the way he had promised to do with the United States.

The speech occasionally dipped away from trade, with Trump hailing the defeat of ISIS in the Middle East while also promising to reform America's immigration laws to move away from so-called "chain migration" to a merit-based system.

In a question and answer session after the speech, Trump also couldn't resist taking a jab at the press, telling founder Klaus Schwab: "It wasn't until I became a politician that I realized how nasty, how mean, how vicious, and how fake the press can be." 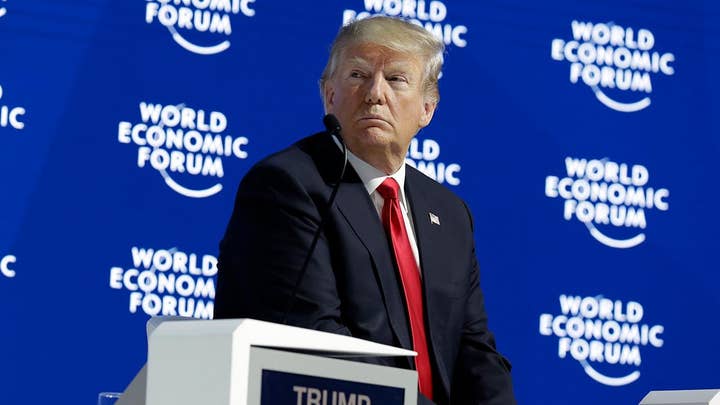 In his speech he did not mention specific trade deals, but in an interview Thursday evening, he indicated he was possibly open to the U.S. entering the Trans-Pacific Partnership, but only if it was a “substantially better deal.”

In the same interview, he said he may or may not pull the U.S. out of the North American Free Trade Agreement -- an agreement he has repeatedly called to be renegotiated.

"NAFTA's a horrible deal, we're renegotiating it," he said. "I may terminate NAFTA, I may not — we'll see what happens.

Earlier this week, the Trump administration announced a new tax on imported solar panels and washing machines as part of his promise to protect American jobs from foreign competition.