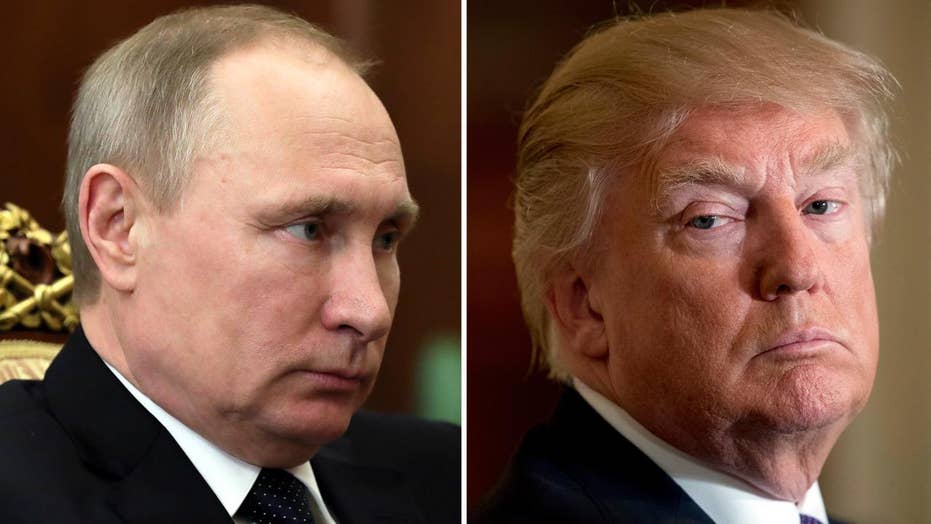 Expert: I'm more worried than ever about US-Russia war

Stephen Cohen, professor of Russian studies and politics at NYU and Princeton: Notion of Pres. Trump is puppet of Putin is product of the 'American War Party' and I'm worried Russia will overreact. Russia thinks Washington politics is crazy right now

President Trump declared Wednesday that U.S.-Russia relations “may be at an all-time low,” as he praised his top diplomat Rex Tillerson for working to address those tensions in Moscow – and left open whether ties between the two countries can be mended.

“Right now, we’re not getting along with Russia at all, we may be at an all-time low,” Trump said, during a White House press conference with Jens Stoltenberg, NATO's secretary-general.

Tillerson gave a similar assessment during a press conference with Russian counterpart Sergey Lavrov, after meeting at the Kremlin with Vladimir Putin for nearly two hours Wednesday.

Tensions between the U.S. and Russia have flared since last week’s U.S. missile strikes against Syria’s Assad regime, Russia’s ally, in response to a chemical weapons attack. Trump stood by the decision on Wednesday, calling Bashar Assad a “butcher” and saying: “I have absolutely no doubt we did the right thing.”

Asked whether it's possible Syria could have launched the attack without Russia's knowledge, Trump gave a mixed answer, saying it's "possible" but "probably unlikely."

“I would like to think that they didn’t know, but certainly they could have, they were there,” he said.

The president said it would be “fantastic” if the U.S. and Russia eventually get along but could not say whether that would happen.

Trump, meanwhile, dialed back his pre-inauguration criticism that NATO is “obsolete,” citing more involvement in fighting terrorism. “I said it was obsolete. It’s no longer obsolete,” he said.

Stoltenberg agreed that “NATO can and must do more in the global fight against terrorism.”

Trump also touched on his efforts to address the threat from North Korea and said broadly, “Right now the world is a mess. ... By the time I’m finished, it’s going to be a lot better place to live in, because right now it’s nasty.”

Addressing ties with another global power, Trump said he and Chinese President Xi Jinping had “very good chemistry” during their meeting last week and voiced hope that the country can help with North Korea. He said he told Xi that helping with Pyongyang could pave the way for a good trade deal, but the U.S. would “go it alone” if necessary.

“I think he wants to help. We’ll see whether or not he does,” Trump said. He praised China for, just minutes earlier, abstaining from a United Nations Security Council resolution that would have condemned the use of chemical weapons in Syria. Russia vetoed the resolution calling for a speedy investigation into the attack.

While Tillerson was working to ease tensions Wednesday with Russia, those tensions could help assure European allies who feared the administration would go easy on Russia. During his 2016 campaign, Trump said he would decide whether to honor the commitment to protect the Baltic republics against Russian aggression, based on whether those countries "have fulfilled their obligations to us."

He has since made his support of NATO allies clear, but has reiterated his stance that European members need to meet their end of the bargain if they are to continue benefiting from the military alliance.

The Trump administration says it is spending a disproportionate share on defense compared with its 27 partners, and that it expects action by the time Trump meets with other alliance leaders on May 25.

NATO leaders pledged in 2014 to halt defense spending cuts and move toward a guideline target of 2 percent of gross domestic product within a decade. Only four other nations currently meet the target: Britain, Estonia, Greece and Poland. White House officials said in advance of Wednesday’s meeting that the administration still wants other nations to spend more on defense.

Stoltenberg backed Trump’s goal on Wednesday, saying, “We know that we all need to contribute our fair share,” and suggesting Trump’s focus on the issue has been helpful.

Trump reiterated Wednesday that NATO members must “meet their financial obligations” and “many have not been doing that.”

The North Atlantic Treaty Organization is a military alliance of European and North American democracies created after World War II to strengthen international cooperation as a counter the rise of the Soviet Union.

The United States, NATO's most powerful member, spends more on defense than all the others combined — 3.61 percent of GDP in 2016, according to NATO estimates. U.S. spending, too, has tapered off in recent years.

Trump on Tuesday also signed off on Montenegro's upcoming accession into NATO. Russia strongly opposes the move in a region it considers part of its strategic sphere of interest.