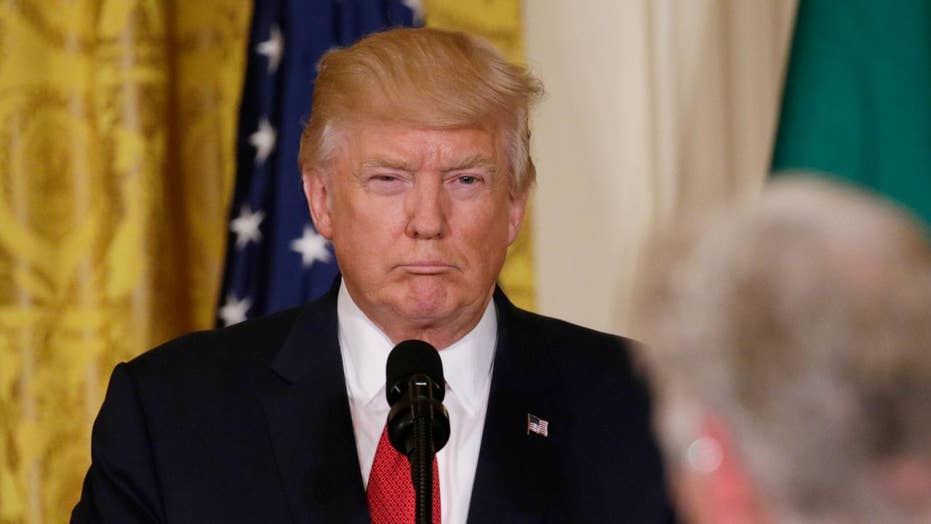 Trump: Iran not living up to the spirit of the agreement

President Trump responds to questions about Iran and North Korea

President Trump said Thursday that Iran is “not living up to the spirit” of the nuclear deal struck under the Obama administration, warning that his team is analyzing it “very, very carefully.”

The president made the comments during a White House press conference, a day after Secretary of State Rex Tillerson announced a “comprehensive review” of the nuclear deal. Even as the administration this week formally certified that Iran is complying with the deal’s terms, Trump said Thursday that Tehran is not doing enough.

“They are doing a tremendous disservice to an agreement that was signed,” Trump said. “They are not living up to the spirit of the agreement.”

The president did not go into specifics, and left open the door to whether the administration might scrap, uphold or try to revise the Obama-era agreement.

“We will see what happens,” Trump said.

The administration has made clear it is looking closely at the agreement, which Trump has long criticized, without signaling what the end-goal might be. Earlier Thursday, Iranian Foreign Minister Javad Zarif  -- a key player in international negotiations for the deal that had Iran curb its nuclear program in exchange for sanctions relief – tweeted, “Worn-out US accusations can't mask its admission of Iran's compliance w/ JCPOA, obligating US to change course & fulfill its own commitments.”

The visit comes as the Trump administration is tackling multiple foreign challenges including the Syrian civil war, Iran’s nuclear ambitions and most immediately the tensions on the Korean Peninsula. Moments before their press conference, a police officer reportedly was killed and two were wounded in a shooting on the Champs-Elysees in Paris.

“It looks like another terrorist attack,” Trump said, offering his “condolences” to the French people. “What can you say, it just never ends.”

On North Korea, Trump said he hopes to address the problem, with China’s help. He said he has told Chinese President Xi Jinping they could get a much better trade deal if they “get rid of this menace” or otherwise help ease the situation in North Korea.

Tillerson said Wednesday the U.S. was exploring ways to pressure North Korea to the negotiating table over its nuclear program. North Korean state media later threatened to launch a "super-mighty pre-emptive strike" that would reduce South Korea and the United states "to ashes."

Italy could be more closely involved in dealing with Syria, in its capacity as a member of the G-7.

The G-7 nations have urged Russia to pressure the Syrian government to end the six-year civil war, and blame Bashar Assad's military for a recent chemical attack that killed more than 80 people.

Trump will travel to Europe next month for the first time since taking office for a NATO meeting in Brussels, followed by a G-7 meeting in Italy.

Italy is also a member of NATO, the military alliance to which Trump says the U.S. contributes more than it receives.