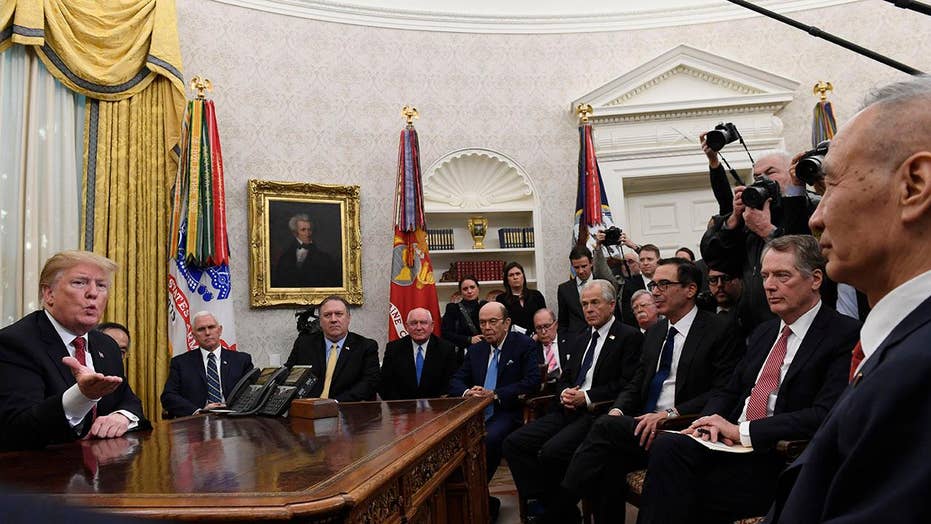 Trump on US-China trade negotiations: We want to make a deal we can be proud of for many years

Fox Business correspondent Charlie Gasparino, contributor Deneen Borelli and Democratic strategist Scott Levenson weigh in on the future of trade negotiations between the U.S. and China.

The White House said in a statement that the two sides had made progress but that "much work remains to be done." In the meantime, the administration said it would keep a "hard deadline" of March 2, at which point it would escalate import taxes on $200 billion in Chinese good if there was no deal.

"Based on many months of negotiations, we had two very intense and very long days of discussions," said U.S. Trade Representative Robert Lighthizer.

Lighthizer added: "We have much work to do if we're going to have an agreement. But we made substantial progress."

The U.S.-China trade hostilities have weakened both economies, shaken financial markets and clouded the outlook for global trade. Analysts have held out little hope the two countries can reach a comprehensive deal over the next month.

At the heart of the conflict is the U.S. demand that Beijing stop taking predatory actions -- from intellectual theft to the forced handover of technology by U.S. companies -- in a drive to become a global power in such fields as robotics and electric cars. The Trump administration also complains that Beijing unfairly subsidizes its own tech companies.

China has denied that it deploys any such tactics.

Lighthizer, who has taken a hard line on Chinese trade practices, led the U.S. delegation. Vice Premier Liu He headed the Chinese side.

After the talks ended Thursday, Trump spoke glowingly of a Chinese commitment to buy more U.S. soybeans. But he acknowledged that he and Xi would have to reach a final agreement on the far more contentious technology issues. And Trump said that might require more than one meeting with Xi.

"There are some points we don't agree to, but we will agree," the president told reporters. "I think when Xi and I meet, every point will be agreed to."