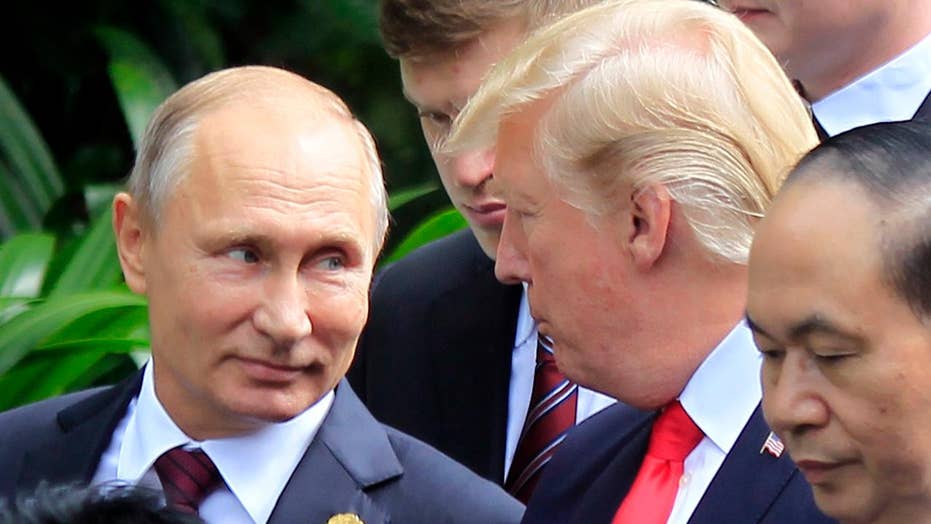 Trump says Putin denies meddling in the 2016 US election

Trump and Putin briefly spoke several times while in Vietnam for a regional economic summit, as part of the U.S. president's 12-day trip to Asia.

Congress and Justice Department special counsel Robert Mueller are each conducting investigations into whether Trump associates colluded with Russian in the 2016 campaign.

“President Trump today stated that he believed Vladimir Putin is being sincere when he denies Russian interference in the 2016 presidential election and reiterated that he hopes to cooperate with Russia in Syria,” McCain said Saturday. “There's nothing ‘America First’ about taking the word of a KGB colonel over that of the American intelligence community.”

McCain also said, “There's no ‘principled realism’ in cooperating with Russia to prop up the murderous Assad regime, which remains the greatest obstacle to a political solution that would bring an end to the bloodshed in Syria. Vladimir Putin does not have America's interests at heart. To believe otherwise is not only naive but also places our national security at risk.”

Trump and Putin were in together in Danang, Vietnam, for the 21-nation Asia-Pacific Economic Cooperation. They have no plans to hold a formal meeting during Trump’s five-nation trip the concludes this weekend.

Trump told reporters on the flight from Danang to Hanoi that he and Putin largely discussed Syria in their "two or three very short conversations."

At about the same time, the Kremlin issued a joint statement for both presidents about the countries’ “successful” and continuing efforts to defeat the Islamic State terror group, or ISIS, in Syria, the caliphate’s last stronghold.

In Syria’s years-long civil war, Putin has backed the regime of Syrian leader Bashar al Assad, while Western allies have supported his ousters.

"I would rather have him get out of Syria,” Trump told reporters. “If we had a relationship with Russia, that would be a good thing. In fact, it would be a great thing, not a bad thing.”

Trump declined to comment on the recent allegations about decades-old sexual misconduct by Roy Moore, the GOP nominee for a U.S Senate seat in Alabama. The president said that he hasn’t been following the news closely enough to offer an opinion.